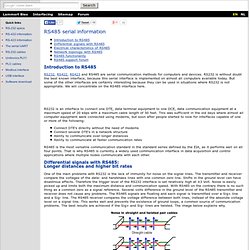 RS232 is without doubt the best known interface, because this serial interface is implemented on almost all computers available today. But some of the other interfaces are certainly interesting because they can be used in situations where RS232 is not appropriate. We will concentrate on the RS485 interface here. RS232 is an interface to connect one DTE, data terminal equipment to one DCE, data communication equipment at a maximum speed of 20 kbps with a maximum cable length of 50 feet. RS485 is the most versatile communication standard in the standard series defined by the EIA, as it performs well on all four points. Differential signals with RS485:Longer distances and higher bit rates One of the main problems with RS232 is the lack of immunity for noise on the signal lines.

Noise in straight and twisted pair cables. RS-485. TIA-485-A, also known as ANSI/TIA/EIA-485, TIA/EIA-485, EIA-485 or RS-485, is a standard defining the electrical characteristics of drivers and receivers for use in balanced digital multipoint systems. 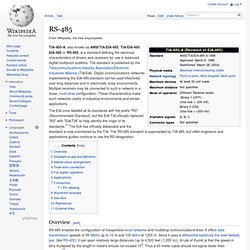 The standard is published by the Telecommunications Industry Association/Electronic Industries Alliance (TIA/EIA). Digital communications networks implementing the EIA-485 standard can be used effectively over long distances and in electrically noisy environments. Multiple receivers may be connected to such a network in a linear, multi-drop configuration. These characteristics make such networks useful in industrial environments and similar applications. The EIA once labeled all its standards with the prefix "RS" (Recommended Standard), but the EIA-TIA officially replaced "RS" with "EIA/TIA" to help identify the origin of its standards.[1] The EIA has officially disbanded and the standard is now maintained by the TIA. 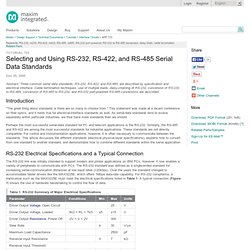 Cable termination techniques, use of multiple loads, daisy-chaining of RS-232, conversion of RS-232 to RS-485, conversion of RS-485 to RS-232, and RS-232 port-powered RS-485 conversions are described. Introduction "The great thing about standards is there are so many to choose from. " This statement was made at a recent conference on fiber optics, and it holds true for electrical-interface standards as well. As serial-data standards tend to evolve separately within particular industries, we thus have more standards than we should.

Perhaps the most successful serial-data standard for PC and telecom applications is the RS-232. Serial, RS485 - doityourselfchristmas.com. Overview RS-485 is very similar to RS-422 where it is balanced pair communications in order to archive high bit rates over long distances with minimal or no noise introduced into the data. 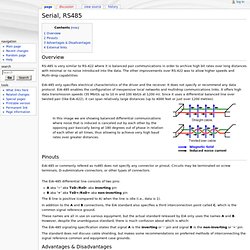 The other improvements over RS-422 was to allow higher speeds and Multi-drop capabilities EIA-485 only specifies electrical characteristics of the driver and the receiver. It does not specify or recommend any data protocol. EIA-485 enables the configuration of inexpensive local networks and multidrop communications links. Pinouts EIA-485 or commonly refered as rs485 does not specify any connector or pinout. The EIA-485 differential line consists of two pins: A aka '−' aka TxD-/RxD- aka inverting pin B aka '+' aka TxD+/RxD+ aka non-inverting pin The B line is positive (compared to A) when the line is idle (i.e., data is 1).

In addition to the A and B connections, the EIA standard also specifies a third interconnection point called C, which is the common signal reference ground. External links.