Stuff You Missed in History Class by HowStuffWorks.com 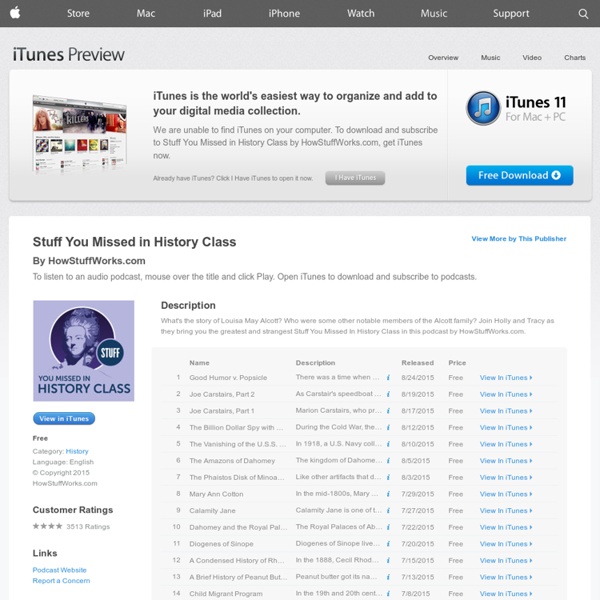 Suck It, Starbucks!: The Q No one seems to understand why iced coffee costs so much more than the regular stuff. Sure, some theories exist: that it's more labor-intensive, that plastic cups are more expensive than paper ones. But on an unseasonably warm spring day recently--when people were lined up out the door of the Starbucks across from my office, waiting to buy iced coffees that cost 30 percent more than hot ones--another idea occurred to me. Namely, that coffee chains and convenience stores had converged on a simple truth: Like flip-flops and sundresses, iced coffee is one of the undeniable pleasures of summer. And regardless of how high the price, people will just pay more for it. Well, coffee barons, your days of ripping us off are officially over.

mental_floss Blog » 4 More Forgotten Founding Fathers This Saturday is July 4, a day when Americans of all shapes and sizes will come together to commemorate the founding of their country, and the noble pursuit of life, liberty, and overcooked hamburgers. Here's a quick quiz question "“ how many people signed the Declaration of Independence? We're betting that few of you, not including the people who compulsively Googled that question, knew the answer is 56.

The Arrow of time On June 17th, every year, the family goes through a private ritual: we photograph ourselves to stop, for a fleeting moment, the arrow of time passing by. Also "The Arrow of Time in ABC News". You can see video Here: Accessing the archive EnquiriesEnquiries relating to the archive collections or the history of the Guardian or Observer should be sent by email to archives@theguardian.com or by post to: Guardian News & Media ArchiveKings Place90 York WayLondon N1 9GU Information on researching the history of the Guardian and the Observer are available in our Frequently Asked Questions section. Consulting the collectionsWhere extensive research is required enquirers are asked to undertake research in person.

Rebecca Campbell “ All of my work comes from a very personal place but I think it’s important to leave room for people to imagine their own stories too. When I paint someone I don’t think of it as a portrait. I think of it as a symbolic painting of “a girl”, or “a woman”. I think this creates openness in the work that allows it to transcend a specific time and place. I’m also interested in showing dreamlike states. For me dream states are symbolic of the inward reflection that makes all creative acts possible.” – Rebecca Campbell Chapel of Horus, Temple of Seti I, Abydos Egypt ; Arabic: مصر‎, Miṣr or Máṣr) is a country mainly in North Africa, with the Sinai Peninsula forming a land bridge in Western Asia. Covering an area of about 1,010,000 square kilometers (390,000 sq mi), Egypt borders the Mediterranean Sea to the north, the Gaza Strip and Israel to the northeast, the Red Sea to the east, Sudan to the south and Libya to the west. Egypt is one of the most populous countries in Africa and the Middle East. The great majority of its estimated 82 million live near the banks of the Nile River, in an area of about 40,000 square kilometers (15,000 sq mi), where the only arable agricultural land is found. The large areas of the Sahara Desert are sparsely inhabited. About half of Egypt's residents live in urban areas, with the majority spread across the densely-populated centres of greater Cairo, Alexandria and other major cities in the Nile Delta.

Treasures of The New York Public Library One of the greatest rarities in the collections of The New York Public Library, the Hunt-Lenox globe was prepared around 1510 by an unknown artist. This small globe (about five inches in diameter) is the earliest surviving engraved copper sphere from the period immediately following the discovery of the New World. It is among the first cartographic representations of the Americas known to geographers. Of the two continents in the Western hemisphere, only South America is actually represented, appearing as a large island with the regional names Mundus Novus (the New World), Terra Sanctae Crucis (the Land of the Holy Cross), and Terra de Brazil (the Land of Brazil). Cuba appears as "œIsabel," and the island shared by the Dominican Republic and Haiti (Hispaniola) appears as "œSpagnolla."

Top Work Out Song Ideas to Get Fit to! We’ve compiled our favourite list of “Great Workout Songs” to get you pumped and ripped in no time time at all. One of these songs will replace 4 hours on a Ab swing! Whether you need some motivation at the gym, whilst your running or lifting a few milk bottles full of water on a broome stick at home – here are some songs to get you excited! Who knows you could even get super buff with just one of these tracks! – on repeat of course. Arms and Armor—Common Misconceptions and Frequently Asked Questions Parrying dagger (pugnale bolognese), ca. 1550–75 Italian Partly gilt steel, brass, and wood; Wt. 15 oz. (425 g) Gift of Jean Jacques Reubell, in memory of his mother, Julia C. Coster, and of his wife, Adeline E. Post, both of New York City, 1926 (26.145.94) The field of arms and armor is beset with romantic legends, gory myths, and widely held misconceptions. Their origins usually are to be found in a lack of knowledge of, and experience with, genuine objects and their historical background.