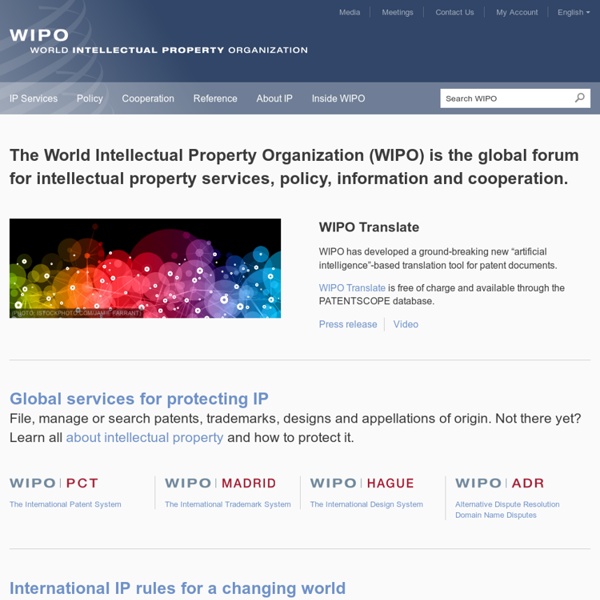 The World Intellectual Property Organization (WIPO) is the global forum for intellectual property services, policy, information and cooperation. WIPO Translate WIPO has developed a ground-breaking new “artificial intelligence”-based translation tool for patent documents. WIPO Translate is free of charge and available through the PATENTSCOPE database. File, manage or search patents, trademarks, designs and appellations of origin. Not there yet? Follow policy discussions and negotiations on the future development of IP in our standing committees and meetings.

Patent Cooperation Treaty The Patent Cooperation Treaty (PCT) is an international patent law treaty, concluded in 1970. It provides a unified procedure for filing patent applications to protect inventions in each of its contracting states. A patent application filed under the PCT is called an international application, or PCT application. A single filing of an international application is made with a Receiving Office (RO) in one language. IP for free_NSW_Glasgow Australian universities are being encouraged to make their intellectual property available for free, after the University of NSW said it will offer IP licences to entrepreneurs at no charge. In a bid to stimulate the take-up of technology, UNSW will offer IP licences for a range of ideas and research results to entrepreneurs and companies at no cost. Licences will need to disclose how the information will be commercialised. If it is not exploited within three years, the university will reclaim the rights to use the information. UNSW also will hold on to any IP it thinks it can commercialise successfully. Les Field, UNSW deputy vice-chancellor for research, says the initiative, known as Easy Access IP, says private companies are better equipped to apply research to new products and services.

European Commission - Competition 'Big Data and Competition' speech by commissioner @vestager EDPS-BEUC Conference on Big Data europa.eu/!FQ46mF13h Convention Establishing the World Intellectual Property Organization (Signed at Stockholm on July 14, 1967 andas amended on September 28, 1979) The Contracting Parties, Desiring to contribute to better understanding and co-operation among States for their mutual benefit on the basis of respect for their sovereignty and equality, Desiring, in order to encourage creative activity, to promote the protection of intellectual property throughout the world, IPR - good stuff from The Times (UK) People have ideas all the time. In business, new ideas can lead to new products and services. They can lead to a better way of doing something. Ideas can come from existing businesses through research and development.

Community Video : Free Movies Lost movie of Andy Sidaris Topics: Action, Andy Sidaris by MICHAEL LINDSEY HOGG It was 45 years ago today (May 13th, 1970), that the Beatles' final movie, Let It Be, received its U.S. premiere, in New York City theaters. Towards a "World Intellectual Wealth Organisation" Towards a Supporting the Geneva Declaration The Geneva Declaration is an impressive step towards the creation of a broad coalition of people, organisations and countries1 demanding that the international community re-think the goals and mechanisms for awarding monopoly control over different kinds of knowledge. It offers many constructive, concrete suggestions for changes in WIPO goals, policies and priorities, and provides ample and insightful arguments for redesign of the copyright and patent bargains to better serve the public interest of all of humankind. We are convinced that new answers sometimes require new questions, not more careful repetition of old questions.

When universities and businesses collaborate, it’s “yours, mine and ours” NEW YORK—Academic research and corporate research and development would appear to mix as well as oil and water given their vastly different cultures and objectives. Yet collaborations among universities and businesses are crucial not only to making new discoveries but also to ensuring that breakthroughs in science and technology find their way to the people who need them. Academics have a history of either giving away too much of their intellectual property to corporate partners or of making it too difficult for companies to license the technology, David Skorton, president of Cornell University in Ithaca, N.Y., said Tuesday during a panel discussion hosted by the New York Academy of Sciences and sponsored in part by pharmaceuticals maker Johnson & Johnson. The solution is to find a middle ground, James Weyhenmeyer, senior vice provost for research with the State University of New York (SUNY) system, said Tuesday during the panel.