3D printing will explode in 2014, thanks to the expiration of key patents - Quartz 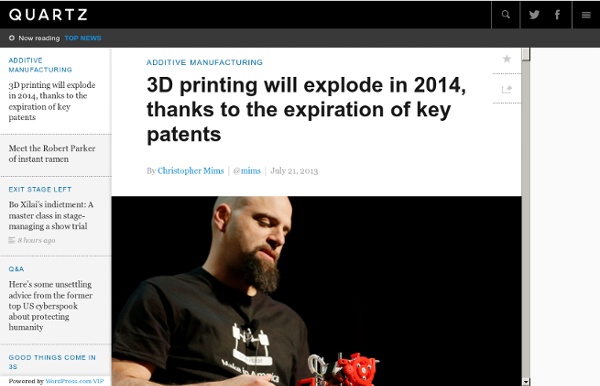 Here’s what’s holding back 3D printing, the technology that’s supposed to revolutionize manufacturing and countless other industries: patents. In February 2014, key patents that currently prevent competition in the market for the most advanced and functional 3D printers will expire, says Duann Scott, design evangelist at 3D printing company Shapeways. These patents cover a technology known as “laser sintering,” the lowest-cost 3D printing technology. Whenever someone talks about 3D printing revolutionizing manufacturing, they’re talking about the kinds of goods produced by, for example, the industrial-grade 3D printing machines used by Shapeways. A huge drop in price and a flood of Chinese 3D printers Older models of 3D printers are already pouring out of China. Once the key patents on 3D printing via laser sintering expire, we could see huge drop in the price of these devices, says Scott. Many of those inexpensive 3D printers are being manufactured in—where else?

The home of 3D printing in New York City Could 3D printing bring manufacturing back to the concrete jungle? New York City is one of the most expensive places to live in the world. Now focused on finance, services and tourism, the once-booming manufacturing industry NYC enjoyed -- from battleships to sugar -- is long gone, and the jobs with it. There's simply no place for the construction and manufacture of steel and clothing in the city anymore -- but could 3D printing have a home in the Big Apple? If you venture into the Long Island City neighborhood, just across from Manhattan, one building has been put to such use. Shapeways is not the only 3D printing company to consider NYC. Why? "Now technology has caught up, we're capable of doing manufacturing locally again," Peter Weijmarshausen, CEO of Shapeways told The Associated Press. Shapeways offers online stores where designers can offer 3D products using the central factory to manufacture them. Via: The Associated Press

Our three-dimensional future: how 3D printing will shape the global economy Lately, it seems like nearly everything has been reproduced by a 3D printer. Between the group that 3D printed a gun, the people who printed a drone, and the army of items sold at this small marketplace for 3D printed goods, there are plenty of novelty uses for these suddenly trendy machines. We're a long way from 3D printing a house, but it's clear that the hobby is inching into the mainstream. Yet it's difficult not to wonder: at what point will 3D printing move beyond novelty to industry? Will these machines change the way we manufacture goods, and subsequently change the global economy, too? The answer: yes and no. Homeward bound Right now, home 3D printing is relatively exclusive to hobbyists and makers. The arc of the 3D printing trend is similar to other technologies, says Cherie Ann Sherman, an economist at Ramapo College in New Jersey. In the modern age of mass manufacturing, consumers aren't fixers. The factory floor Take U.S. aerospace leader Boeing, for example.