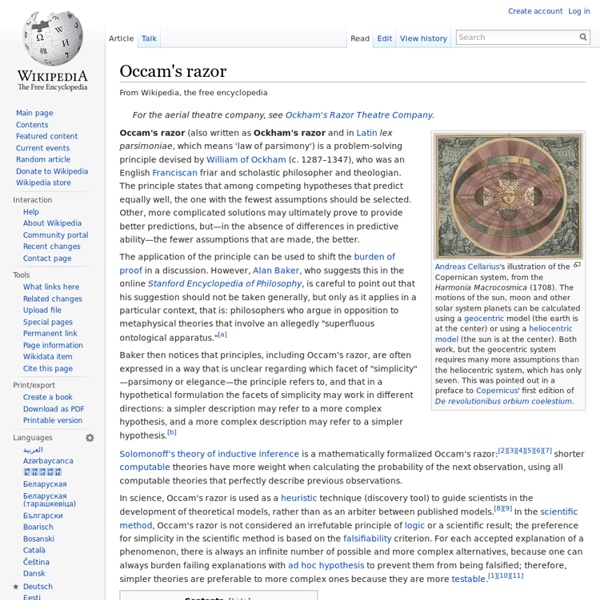 The sun, moon and other solar system planets can be described as revolving around the Earth. However that explanation's ideological and complex assumptions are completely unfounded compared to the modern consensus that all solar system planets revolve around the Sun. Ockham's razor (also written as Occam's razor and in Latin lex parsimoniae) is a principle of parsimony, economy, or succinctness used in problem-solving devised by William of Ockham (c. 1287 - 1347). It states that among competing hypotheses, the one with the fewest assumptions should be selected. Other, more complicated solutions may ultimately prove correct, but—in the absence of certainty—the fewer assumptions that are made, the better. Solomonoff's theory of inductive inference is a mathematically formalized Occam's Razor:[2][3][4][5][6][7] shorter computable theories have more weight when calculating the probability of the next observation, using all computable theories which perfectly describe previous observations.

Believers vs non-believers "I’d shut down Apple" - Michael Dell, 1997. That line is from one of the most memorable quotes ever. Today Michael Dell said it was a misunderstood quote. Maybe, but my gut says it wasn’t. Why clarify it 14 years later. It doesn’t make any sense to me. Dog helps cleaning the house MW_!@#$%^&*() abcdefghijklmnopqrstuvwxyz ABCDEFGHIJKLMNOPQRSTUVWXYZ. Sign up for The Dogwork Newsletter and let little pups like this guy greet you at your computer every now and then. When they wake up, that is. How to Turn Any Classroom Into a Makerspace There is a certain magic found in rolling up your sleeves and tackling a project head on, an undeniable sense of empowerment that results from solving problems and manifesting big ideas. In essence, that’s the soul of the maker movement — creative individuals from all walks of life united by an insatiable desire to improve the world around them. Although synonymous with 3D Printing, it extends far beyond a single technology or buzzword. Truth be told, the maker movement represents the instinctual drive of our species to ascend ever upwards: to innovate, design, and construct a better tomorrow.

Are you in a startup career path or are you one and done? Sometimes peoples' first startups are successful. More power to them. I've been pretty lucky, but not that lucky. In a startup career path, failure becomes experience for the next startup, which unfortunately will probably also fail. Repeat until success. Crash Test for Dog Harnesses Shows 100 Percent Failure Rate In a revolutionary new study, crash tests showed that not a single kind of dog harness provided sufficient protection in the event of an accident, and had a 100 percent failure rate. The nonprofit Center for Pet Safety (CPS) said that despite being properly harnessed, canine crash-test dummies became projectiles, and were even decapitated. “We tested them to the child safety restraint standard and we experienced a 100 percent failure rate to protect either the consumer or the dog,” said CPS founder and CEO Lindsey Wolko. “That is a very real concern for consumers.” CPS would not release the names of brands tested out of fear that consumers will stop using harnesses altogether. Injuries are typically worse for unrestrained dogs, but this test is showing that in some cases, the harnesses are just as lethal.

Why can’t the world’s greatest minds solve the mystery of consciousness? One spring morning in Tucson, Arizona, in 1994, an unknown philosopher named David Chalmers got up to give a talk on consciousness, by which he meant the feeling of being inside your head, looking out – or, to use the kind of language that might give a neuroscientist an aneurysm, of having a soul. Though he didn’t realise it at the time, the young Australian academic was about to ignite a war between philosophers and scientists, by drawing attention to a central mystery of human life – perhaps the central mystery of human life – and revealing how embarrassingly far they were from solving it. The scholars gathered at the University of Arizona – for what would later go down as a landmark conference on the subject – knew they were doing something edgy: in many quarters, consciousness was still taboo, too weird and new agey to take seriously, and some of the scientists in the audience were risking their reputations by attending. Such non-conscious humanoids don’t exist, of course.

Are You A Pirate? I read blog posts by Don Dodge and Glenn Kelman today about people jumping from Google to Facebook and it got me thinking about entrepreneurs. Most people have an aversion to risk, my college economics professor told me. Which means they have to be rewarded to take on that risk. The higher the risk, the higher the possible payout has to be for people to jump. We make risk/reward decisions every day, all day. What the best education systems are doing right In South Korea and Finland, it’s not about finding the “right” school. Fifty years ago, both South Korea and Finland had terrible education systems. Finland was at risk of becoming the economic stepchild of Europe. Is it Time for You to Earn or to Learn? This is part of my Startup Advice series I often have career discussions with entrepreneurs – both young and more mature – whether they should join company “X” or not. I usually pull the old trick of answering a question with a question. My reply is usually, “is it time for you to earn or to learn?” Let’s face it.

Entities should not be multiplied beyond necessity. All things being equal, the simplest solution tends to be the right one. by raviii Feb 18