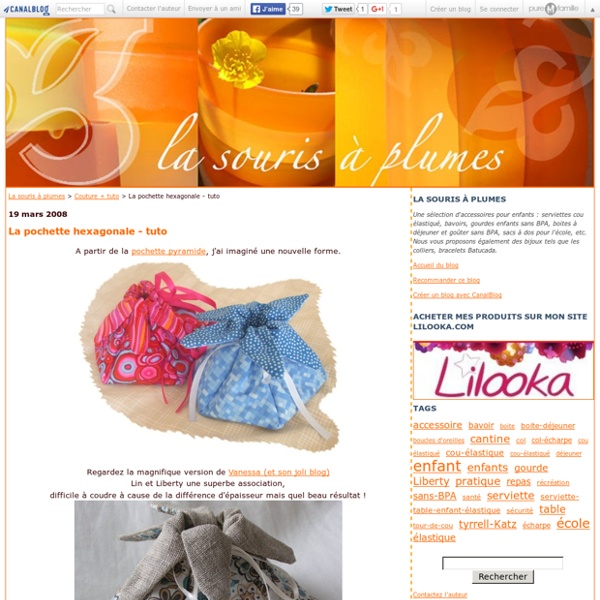 10 Ways to Style a Plain White Tee Few things beat a classic white tee. Throw it on with a pair of jeans, cork wedges, a long necklace, and you’re good to go just about anywhere. Best of all, white tees are such a staple that you can find them at just about any corner store, grocery store, mall, or pharmacy. Seeing as we love style hackery oh-so-much, we decided to take on the classic tee, and came up with 10 new ways to restyle, rework, and totally transform it.

Square(ish) Bottomed Hobo Lunchbag Tutorial Necessity being the mother of invention, I first made this bag because I wanted something that would have all the features of a plastic bag, except I wouldn’t want to throw it out. The features I really wanted were: ability to hold a square container in an upright position, tie-able, light, washable and squishable. Also cute. And so the Square(ish) Bottomed Hobo Lunchbag was born. Materials Needed:- Pattern paper- Ruler- 1/2 yard outer fabric- 1/2 yard lining fabric- matching thread Step One: DIY Fringe Scarf Everyone needs a go-to fringe scarf in their fashion repertoire. Here’s an easy way to make your own. What You Will Need: -Old T-Shirt -Good Scissors Step 1: Go through your old T-shirts and find a daring print or color combo. The 2013 Sony World Photography Awards - In Focus The Sony World Photography Awards, an annual competition hosted by the World Photography Organisation, has recently announced its shortlist of winners. This year's contest attracted more than 122,000 entries from 170 countries. The photographs are being judged in six different competition categories, including Professional, Open, and Student Focus.

Applique inverse: un tutoriel This is a really fun, simple project. Yet another way to fancy up some plain tees or a great fix for old shirts with holes. It takes a little practice to master sewing a curved design like this one. I'm definitely not there yet but, I was pretty impressed with myself this time around. If you're unsure of your sewing skills try finding a design with straight lines i.e. a cross or monogram of your initial. a craft blog: A Very Simple Bento Bag Tutorial : The Math Hello All ~~ I came across a very, very simple drawstring bento bag pattern; thinking it would be a delightful project to share as a tutorial. However, when the bag was complete, it seemed a bit small, barely fitting my 4.5" square bento box. So I worked on a 'formula' (did I tell you I'm a numbers geek?) to customize a pattern to fit your bento lunch box.

Lexique tricot anglais - français à télécharger Cast on and off – Monter et rabattre Cast on (monter les mailles) – CO Tie a slip knot. The tail from your yarn ball should be on your right and the yarn end should be on your left. Faire un noeud coulant. Le fil attaché à la pelote à droite et le fil libre à gauche. Pocket Edition Gameplay[edit | edit source] The objective of the game remains the same as its more developed PC and Console Edition counterparts, where players can build virtual realities in a sandbox-like environment. Like its counterparts, Pocket Edition also has survival elements present in other versions of the game such as brewing, hunger, and dimensions like the Nether but doesn't include any bosses in Pocket Edition yet.