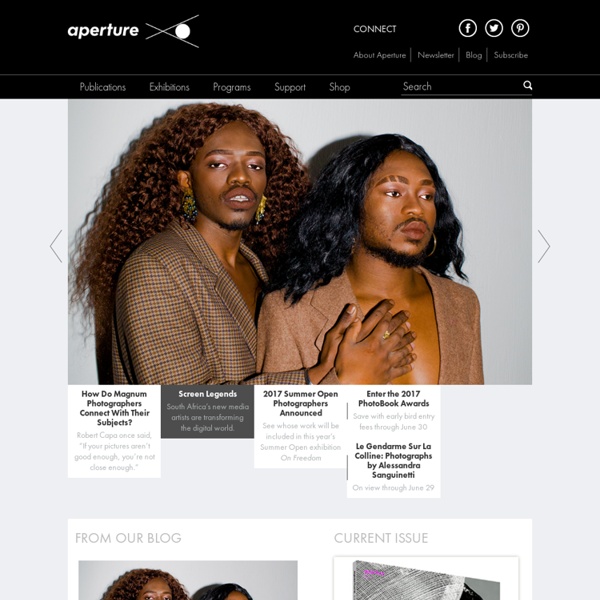 Michael Tittel: Behavior This week we are sharing work submitted to Lenscratch… It does not happen often, but every now and then I will catch someone sneaking a candid of me in public. It is the photographer in me that relates to the strides taken for the perfect image, and because of this I always pretend I cannot see them. Égarements by Cerise Doucède With application, precision and humour, photographer Cerise Doucède created the series ‘Égarements’ (aberration) consisting of installations which represents each of our dreams and obsession or even fears. By shaping her own visions, she reproduces her version of reality and sublimates the most ordinary moments. Objects thus come to life around one or more figures, in intimate locations, at key moments of everyday life. Cerise Doucède creates scenes filled with objects suspended in the space, like pirouetting thoughts. All images © Cerise Doucède | Via: i-ref

Contemporary Photography I made this series with the desire to build a set of symbolic portraits inspired by my background of double cultures. I'm French with Middle Eastern origins. I worked by using the pictorial tradition of still lives. I chose to put forward characters where the nature and objects they carry come from different rites and customs. The photographs can be grouped into three metaphorical categories: Features « Paper Journal Features Martin Kollar – Nothing Special Pierre Le Hors Curtis Hamilton: Taken as Given Hasted Kraeutler Art Gallery Hasted Kraeutler is pleased to announce The Dream Goes Over the Time, an exhibition of new photographs by French-born, Madrid-based artist Pierre Gonnord (b. 1963), beginning March 5 and running through April 25, 2015. Working for over a decade as contemporary art’s preeminent documentarian of globalization’s dark underbelly—insular communities, tribes, and clans that exist almost entirely off the grid, from coal miners and punks to immigrants and gypsies—master portraitist Gonnord’s distinctive practice has developed into a lifestyle, taking him on epic journeys through back roads and uncharted terrain in search of characters that live within distinctive social groups, cut off from the rest of civilization. After investing much careful time and energy with these communities, Gonnord takes their pictures, capturing his protagonists against dark backgrounds from the waist up, in the manner of Old Master painting and portraiture.

[CH] Innen innen is an independent publisher promoting Swiss and international contemporary artists, offering unconventional perspectives on art and contemporary trends. Founded by Aaron Fabian in 2006. innen has gradually gained prestige with its uniquely charming Zines and Books. In 2010 innen launched Zug Magazine, a biannual collection of selected contemporary artworks. i’m jealous of twin-niwt i’m jealous of twin-niwt Ok, before the love, I have to start by saying that tumblr ain’t my favorite thing in the world. It just seems to be a giant sea of images that rarely link back to the artist who made the work. Galerie du Pont Neuf .woochimp_wg{} Toutes les Photographes Jef baecker Thierry lacroix Alain longeaud

10 most Influential Active Street Photographers Update After quite a few suggestions from you, the StreetHunters.net Readers, we added an extra section at the bottom of the post called “Influential Active Street Photographers recommended by our Readers”. Enjoy! Introduction Photography by Gabriela Minks Gabriela Minks is a talented 22 years old semi-professional photographer based in Florianópolis, Brazil.