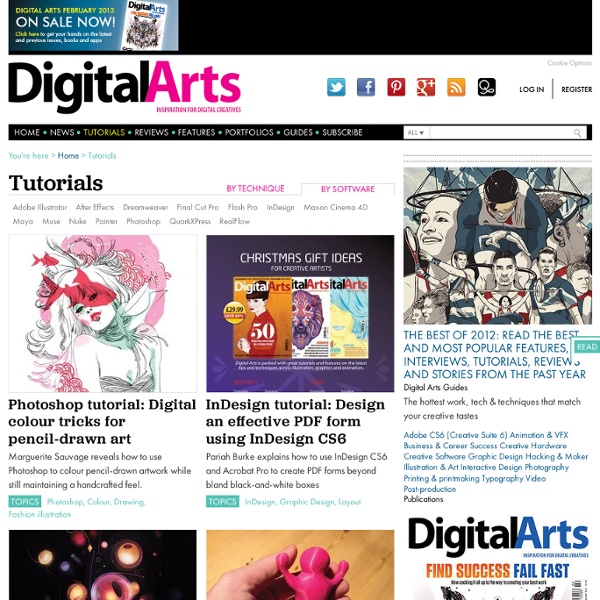 How to control symmetry in a portrait in 3 steps In terms of sci-fi fantasy portraits, symmetry is very important. Heroes and heroines need to be attractive and have heroic proportions to their features. Symmetry plays a large part in dividing the face into the ideal classical proportions that represent beauty as well as indicating other desirable traits. Symmetry becomes difficult when the head is tilted away from the viewer, but as long as the face is equally divided in the correct proportions the desired effect can still be maintained. This is where the artist's skill with perspective and foreshortening will be tested. Before you begin Maxon Cinema 4D Prime [Training, Tutorials & Support] {related_entries id="vendor"} {/related_entries} Painterly City Tutorial by Greyscalegorilla The talented Chris Schmidt has provided a great tutorial on how to create a fun sketchy, painterly style cityscape using MAXON CINEMA 4D.

These Adorable Color Block Crayon Candles Can Be Made At Home! A candle which represents beauty and love is adored by all women. Any kind of candle that makes a soft burning light gets our attention and it is even more is we face any designed candles. Though there are different types of candles with their size, fragrance and type; all types are not liked by everybody. Some adores the fragrance of the candles and other may look for the cute colors. Via: Brit Practical Motion Graphic Tutorials Jeff Almasol from redefinery.com has made a bundle of 50 After Effects scripts available for free at redefinery.com/ae/rd_scripts/. These scripts are time savers! In return, Jeff suggests you consider passing the savings onto organizations doing good work. Jeff is a super talented guy with a huge heart and I wanted to acknowledge him by demonstrating some of his scripts in this tutorial. I decided to focus on only 20 of his scripts so this tutorial wouldn’t be too long. Enjoy!

Photoshop To Illustrator: A Workflow For Textile Artwork Introduction On October 2nd, I participated in the FESPA Digital Textile Conference in Milan. 160 attendees from all over the world gathered to listen to presentations whose themes would range from the current market trends to economical analysis, from case studies to production techniques. In July, I had the privilege and the pleasure to be invited as one of the fourteen speakers of the day. Given the nature of the audience, I was looking for some subject that could be of real interest for the textile community, so I proposed the premiere presentation of a technique, later evolved into a proposed workflow, aimed at recovering and manipulating patterns and motifs designed with traditional screen printing in mind, with an eye at the flexibility of the modern digital workflow which is quickly taking over. FESPA were delighted and gave me carte blanche, so I set to study and refine the proposal. This long article opens it to the public it for the first time after my DTC presentation.

CreativeCOW The Hobbit & The Dawn of High Frame Rate Cinema The technology wizards of the film/TV industry have been talking about High Frame Rate cinema for a long time; indeed, Douglas Trumbull's Showscan at 60 fps presaged the current interest over 30 years ago. But it took director Peter Jackson to take the plunge for mainstream cinema, declaring he would shoot The Hobbit in 48 fps to get momentum going. In about a year's time, manufacturers made the gear, theater exhibitors updated their movie theaters, and the studios prepared for one of the most audacious technology debuts that cinema has seen. Creative COW goes behind the scenes to see what it took for you to see The Hobbit in 48 fps. Editorial, Feature, People / InterviewDebra Kaufman

Duik – DuDuF IK Tools – DuDuF R&D Credits • Nicolas Dufresne – Lead Developper• Dan Ebberts – Developping the original IK Expressions• Kevin Schires – Including images in the script• Eric Epstein – IK with 3D Layers• Matias Poggini – Bezier IK• Zeg – UI design• eZioPan – Simplified Chinese Translation• Motion Cafe – Ideas and feedback• Fous d’anim – Ideas and feedback• Assia Chioukh and Quentin Saint-Georges – guides• And many thanks for the crowdfunders who showed their love to Duik! If you’re a crowdfunder and your name is missing/misspelled, or you want to add a link to your site, contact us! 6 tips for using grids in logo design Logo grid systems, construction guides and circles can be very powerful techniques for creating of a logo design in 2015. A logo grid is a geometric design technique that isn't necessary for every design project – but when executed correctly in your logo design, it can transform company's visual identity from branding zero to branding hero. Here, Niall O'Loughlin from 99designs shares his biggest do's and don'ts of using logo grids in the year ahead... Subscription offer

80+ Excellent Cinema 4D Tutorials and Best Practices CINEMA 4D is a 3-D application that is popular amongst matte painters in film production, largely due to the BodyPaint 3D functionality. It is equally popular amongst motion graphics artists, thanks to its excellent integration with compositing application pipelines, and a very artist-friendly, customizable workflow and interface. It has been used for films such as Chronicles of Narnia, Beowulf, Polar Express, Spiderman 3 and Monster House. CINEMA 4D’s intuitive interface and logical workflow make it possible for those new to 3D artistry to dive in and be productive quickly. Feedback is smooth and interactive so you can let your creativity run free.