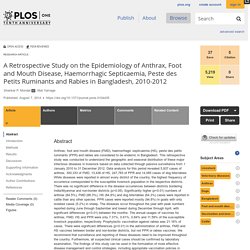 This retrospective study was conducted to understand the geographic and seasonal distribution of these major infectious diseases in livestock based on data collected through passive surveillance from 1 January 2010 to 31 December 2012. Data analysis for this period revealed 5,937 cases of anthrax, 300,333 of FMD, 13,436 of HS, 247,783 of PPR and 14,085 cases of dog bite/rabies. While diseases were reported in almost every district of the country, the highest frequency of occurrence corresponded to the susceptible livestock population in the respective districts. There was no significant difference in the disease occurrences between districts bordering India/Myanmar and non-border districts (p>0.05).

FAO via YOUTUBE 20/05/15 Towards Zero rabies in Viet Nam. BMC Infectious Diseases 2014, 14:212 Human rabies surveillance and control in China, 2005–2012. Epidemiology situation and analysis 19,221 rabies cases in humans and animals were reported in 30 provinces in China from 2005–2012 and Tibet is now the only region in China that has no reported human rabies cases. 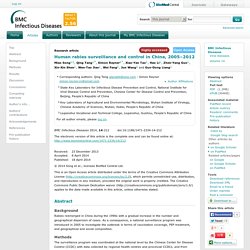 The human cases were mainly reported in the southern and eastern regions with Guangxi, Guizhou, Guangdong, Hunan and Sichuan accounting for 58.0% of the total number of cases (see Figure 1). Almost all cases occurred in rural areas (93.3%) rather than urban areas (6.7%) and were more common in males than females (2.3:1). The range of ages was from 2 months to 99 years old (median 23.5 years) with the majority of cases occurring between the age ranges of 0–14 year (s) (19.7%) and 30–74 years (81.8%). Students represent children from the age of 4 to 16 who are attending classes outside their home. Figure 2. Figure 3. Human rabies cases survey and analysis Table 1. PEP treatment in suspected rabies cases Table 2. Table 3. Table 4. CDC EID - Volume 19, Number 4—April 2013 - Au sommaire notamment:Response to a Rabies Epidemic, Bali, Indonesia, 2008–2011. Skip directly to local search Skip directly to A to Z list Skip directly to navigation Skip directly to site content Skip directly to page options CDC Home CDC 24/7: Saving Lives. 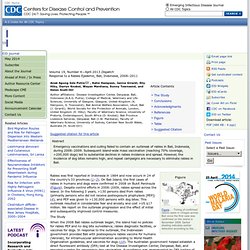 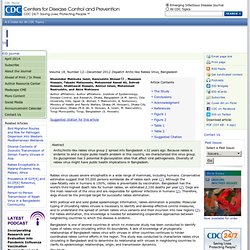 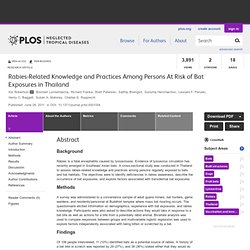 Evidence of lyssavirus circulation has recently emerged in Southeast Asian bats. A cross-sectional study was conducted in Thailand to assess rabies-related knowledge and practices among persons regularly exposed to bats and bat habitats. The objectives were to identify deficiencies in rabies awareness, describe the occurrence of bat exposures, and explore factors associated with transdermal bat exposures. Methods A survey was administered to a convenience sample of adult guano miners, bat hunters, game wardens, and residents/personnel at Buddhist temples where mass bat roosting occurs.