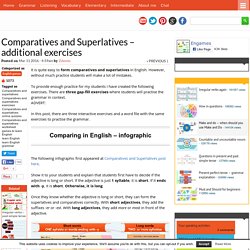 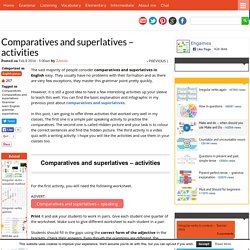 They usually have no problems with their formation and as there are very few exceptions, they master this grammar point pretty quickly. However, it is still a good idea to have a few interesting activities up your sleeve to teach this well. You can find the basic explanation and infographic in my previous post about comparatives and superlatives. In this post, I am going to offer three activities that worked very well in my classes. 100 most common adjectives in English - learn English,visual,dictionary. Comparative and Superlative. Comparatives and superlatives in English. Comparative is used when you want to compare two things. 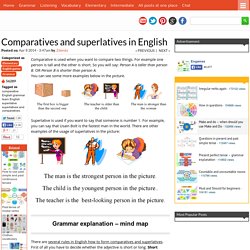 For example one person is tall and the other is short. So you will say: Person A is taller than person B. OR Person B is shorter than person A. You can see some more examples below in the picture. Superlative is used if you want to say that someone is number 1. Grammar explanation – mind map. Personal qualities. Students often find the vocabulary for personal qualities really difficult to learn and understand. 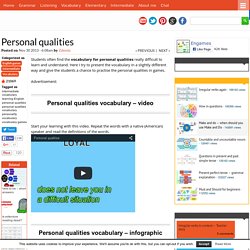 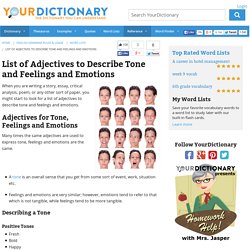 Adjectives for Tone, Feelings and Emotions Many times the same adjectives are used to express tone, feelings and emotions are the same. A tone is an overall sense that you get from some sort of event, work, situation etc.Feelings and emotions are very similar; however, emotions tend to refer to that which is not tangible, while feelings tend to be more tangible. Describing a Tone Positive Tones FreshBoldHappyDevotedLovingSympatheticBelievingSupportiveEnlightenedCleverInvolvedIntent Negative Tones SarcasticNarcissisticSardonicMysteriousObnoxiousFoolishDisgruntledHurtfulHatingIrritatedOutragedAlarmedStartledHorrifiedAnnoyedSecretiveQuizzicalGuiltyDisbelievingNot supportiveCautiousCalculatedPurposefulSadBitterAngryResentfulRemorsefulDullDreary Other Tones Describing a Feeling Positive Feelings Negative Feelings. Adjectives. Adjectives:Types and List of Adjectives.

Adjectives are words that are used to describe (what kind of?) 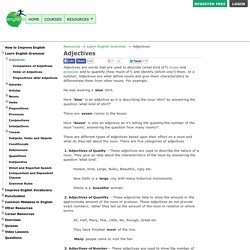 Nouns and pronouns and to quantify (how much of?) And identify (which one?) Them. In a nutshell, Adjectives are what define nouns and give them characteristics to differentiate them from other nouns. For example: He was wearing a blue shirt. Here ‘blue’ is an adjective as it is describing the noun ‘shirt’ by answering the question ‘what kind of shirt?’ List of Descriptive Words and Adjectives. Adjective List & Adjectives List. Compound Words (Categorized) Vocabulary Word List. Adjectives B – ESL Picture Dictionary. Top 500 Adjectives used in English Vocabulary Words for Speaking. List Of Adjectives. This is the place to get the Ultimate Lists of Adjectives. 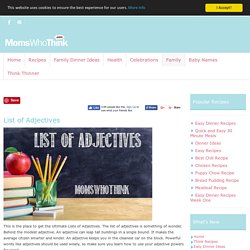 The list of adjectives is something of wonder. Behold the modest adjective. An adjective can leap tall buildings in a single bound. It makes the average citizen smarter and kinder. An adjective keeps you in the cleanest car on the block. The right adjectives can help you win the war of words with wit, or capture a heart with elegant eloquence. Go straight to the Ultimate List of Adjectives OR read on for the grammatical rules of English regarding adjective usage including examples of the different types used, and the separated lists of adjectives by category (describing people, emotions, food, colors, amount, size and more). Opposites. The Adjective Detective. Adjectives. What is an adjective - English grammar lesson. Adjectives in English. Adjective Song from Grammaropolis - "Paint the Way"

Comparative and superlative of adjectives. An adjective is a word that modifies a noun. 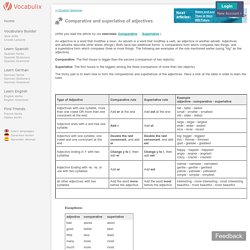 An adverb is a word that modifies a verb, an adjective or another adverb. Adjectives and adverbs describe other words (things). Both have two additional forms: A comparative form which compares two things, and a superlative form which compares three or more things. The following are examples of the rule mentioned earlier (using "big" as the adjective). Comparative: The first house is bigger than the second (comparison of two objects)

English Grammar Explanations - Comparative/superlative. Comparative is the name for the grammar used when comparing two things. 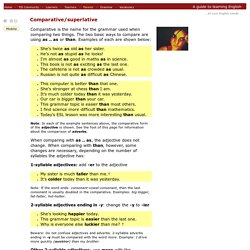 The two basic ways to compare are using as .. as or than. Examples of each are shown below: She's twice as old as her sister. He's not as stupid as he looks! I'm almost as good in maths as in science. Different Types Of Adjectives & Their Examples. >Adjective and Adjective Phrase.