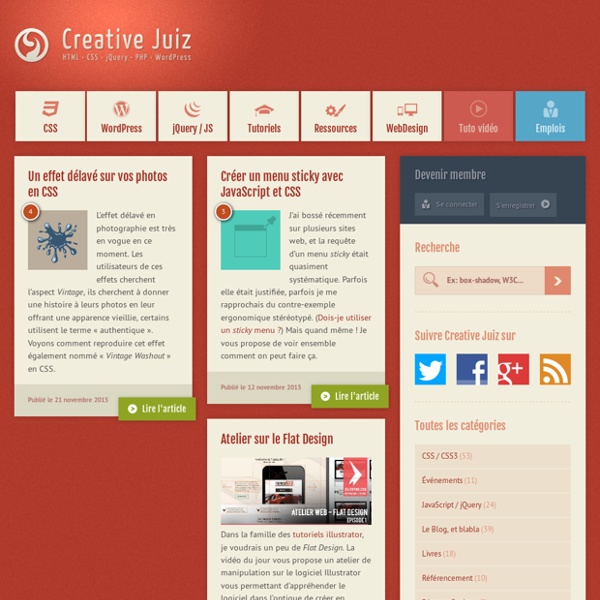 49 Free Responsive HTML5 CSS3 Website Templates HTML5 has been around for a while now and we can see all developers have started to share free resources in HTML5, CSS3. The css3 website templates we are introducing today are totally free with amazing features like flat design, responsive layout, jquery sliders etc. Free doesn’t make it any bad as you can see most of these html templates look like premium templates. We have took a little extra time to grab new HTML templates in this exciting list of freebies. Download, share these templates with your friends and you have complete freedom to modify the theme to your project needs without any attributions. High quality theme with retina ready solutions may be of interest these days for majority of the audience and you can find many template being remade for this option along with responsive layout.

Blog.SpoonGraphics How To Create Digital Particle Waves in Adobe Illustrator The blend tool in Adobe Illustrator is often used to create abstract wave graphics, but I’ve been experimenting with some additional adjustments and discovered some handy tricks to create sci-fi inspired digital particle waves. This kind of imagery perfectly complements hi-tech interface designs with colourful data visualisation effects, or it could be used to create abstract art in its own right. We’ll create the initial effect in Adobe Illustrator, where I’ll show you a few options for randomising the result, then switch over to Adobe Photoshop for some extra colour enhancements to really boost the vibrancy. How To Create an Editable Retro Text Style in Illustrator Many of the text effect tutorials I produce for Adobe Illustrator and Adobe Photoshop tend to require the text to be permanently set, which means if the wording needs changing, the effect would have to be created all over again from scratch.

The Simpler CSS Grid Last week I talked about 960 Grid System is Getting Old. Surprisingly a lot of comments have been made. It seems like people are using 960gs because of the "golden ratio" — all numbers are even. I'm a designer, not a grid scientist. Features Standing on the shoulders of Scriptographer and making use of HTML5 standards, Paper.js is a comprehensive open source vector graphics scripting framework. Document Object Model Paper.js provides a Document Object Model (also called a Scene Graph) that is very easy to work with. Create a project and populate it with layers, groups, paths, rasters etc. Groups and layers can contain other items and even other groups. If you've never heard of a Document Object Model before, you can think of it as the layers palette of applications such as Adobe Illustrator & Adobe Photoshop.

Coding High density retina displays or screens, like Apple’s Retina Display, have lots of pixels in a small space that it is almost impossible see the pixelation, thus, displaying smoother images and texts. Although Apple offered it first on the market, manufacturers have been releasing similar devices recently to compete with Apple. When using Retina Display devices, you can see that other sites online appear blurry. This is because of the low-resolution images being stretched to fill the screen that makes the site look disgusting. A Retina Display scales 1px to 2px, making the size double. Read More create custom css radial-gradients dragging your mouse draGGradients is as a simple tool to generate and customize multiple css3 radial gradients. I get back an old project that uses a multiple gradient jpg image as a background and started to generate the same image in css-only. Instead of code only this image I finished doing this little stuff. Hope you enjoy it!

The Society Inc The history of The Rocks has always sparked my imagination . It started when I read ‘Playing Bettie Bow’ at school & continued with my study of Australian history . It evokes the mysteries of times long ago , with it’s sandstoned paved ways , side alleys , tunnels & beautiful buildings I have refreshed a secret place , down nurses walk & up a unassuming flight of stairs . Thereâ€™s more to the CSS rem unit than font sizing The following is a guest post by Roman Rudenko, a mad scientist at Mobify where he’s tasked with understanding why browsers misbehave and with cajoling them into playing nice. When he’s not coding, Roman is learning to ride a motorbike without crashing into too many solid objects. Many web designers and developers are familiar with the CSS rem length unit. But, you may not know that it has a couple of handy alternate uses. In this post, I’ll describe how to use the CSS rem unit to scale specific page elements while leaving others unaffected. I’ll also discuss how to use it as a replacement for the under-supported vw (viewporth width) unit.

40 Useful HTML5 Tutorials, Techniques and Examples Toolkits HTML5 right after its arrival has been in the news because of its enhanced functionality and ease of use. And now the latest version of HTML5 is out, web developers and internet marketers are shifting to HTML5 as it comes with several new and improved features that distinctly make Web development easier. In this collection, we are sharing some useful HTML5 tutorials with our designing and development fraternities to help them learn the new ways to get web pages SEO friendly and more interactive. In this post, we have collected some very valuable tutorials that will assist you in getting a good command of HTML5.

Blog - Denise Jacobs The landscape of business has changed dramatically over the past several years. For decades, the focus has been on cost control and technology, whereas the current business climate has prompted a paradigm shift. Success for companies in the 21st century is now dependent upon creativity and innovation, both hailed as the most important contributors to the growth of the economy. Read More