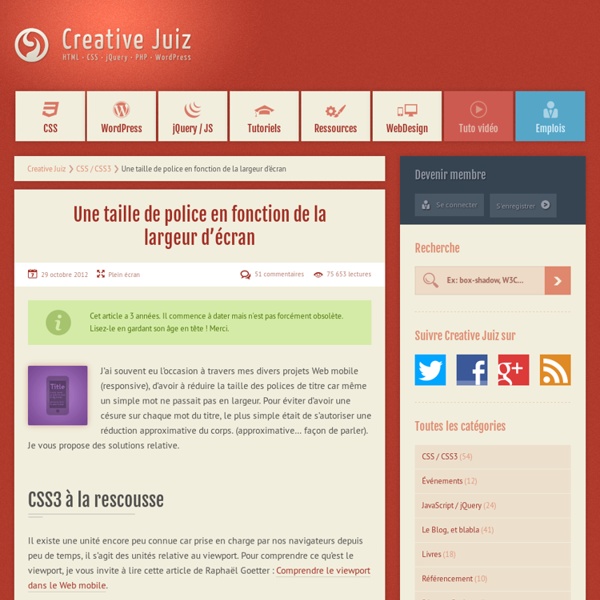 Separation, Abstraction, and Cascading in CSS | LispCast TLDR: LESS and Sass (and similar solutions) have saved CSS for three reasons: separation, abstraction, and cascading. While I welcome them, CSS still has other problems which I believe can be solved. I propose some solutions. Introduction A lot is said about LESS and Sass, and for good reason. But when people talk about why they are so great, they miss the main point. In this essay, I will try to put into words (and some pictures) what my intuition tells me as a developer and programming language enthusiast to clarify why CSS is innately unmaintainable, does not satisfy its own design goals, and why LESS and Sass make a bad language more bearable. Zero Degrees of Separation Way back when, people used HTML tables to style their pages. Those were the days of font tags and tables. Then CSS came along, and people talked a lot about separation of content from presentation. Your styles were still tied to the structure of the document they were styling. HTML and CSS are separate but not equal.

Complete list of HTML entities Complete list of HTML entities with their numbers and names. Also included is a full list of ASCII characters that can be represented in HTML (i.e. printable characters). ASCII Characters (Printable) Only printable characters are displayed as control characters (0-31) shouldn't be present in HTML pages since they have no visual representations. ISO-8859-1 Characters Full list of supported ISO-8859-1 characters. ISO-8859-1 Symbols Full list of supported ISO-8859-1 symbols in HTML. Math Symbols Full list of all supported math symbols in HTML. Greek Letters Full list of all supported greek letters in HTML. Miscellaneous HTML entities List of miscellaneous HTML entities. Pure CSS Slide Up and Slide Down If I can avoid using JavaScript for element animations, I'm incredibly happy and driven to do so. They're more efficient, don't require a JavaScript framework to manage steps, and they're more elegant. One effect that is difficult to nail down with pure CSS is sliding up and down, where the content is hidden when "up" and slides in when "down". The reason it's difficult is because you may not know the content height. After playing around with different CSS properties, I've found a way to make a pure CSS sliding effect. The HTML The effect really only requires one element, so we'll stick to that: <div class="slider">Some content here.... Add as much content as you'd like. The CSS Before we get into the trick, let's set the few obvious properties: overflow-y and the CSS animation properties: So now the fun: the trick we'll use to make the height play nice is the max-height property. Not Perfect So there comes the case where the height of the element could be 100px or 100000px.

All you need to know about CSS Transitions CSS3 transitions bring simple and elegant animations to web applications, but there’s a lot more to the spec than first meets the eye. In this post I’m going to delve into some of the more complicated parts of CSS transitions, from chaining and events to hardware acceleration and animation functions. Letting the browser control animations sequences allows it to optimize performance and efficiency by altering the frame rate, minimizing paints and offloading some of the work to the GPU. Browser support CSS transitions are supported in practically every version of Firefox, Safari and Chrome. Webkit based browsers (Safari and Chrome), still require -webkit prefixes for animations and gradients, but these are soon being removed. Applying transitions A simple way of applying transitions is with CSS pseudo-classes, such as :hover. When the :hover pseudo-class is activated, the height will be transitioned linearly from 100px to 200px over a period of 2 seconds. Transitioning gradients Clipping

Using CSS animations This is an experimental technologyBecause this technology's specification has not stabilized, check the compatibility table for usage in various browsers. Also note that the syntax and behavior of an experimental technology is subject to change in future versions of browsers as the specification changes. CSS animations make it possible to animate transitions from one CSS style configuration to another. Animations consist of two components, a style describing the CSS animation and a set of keyframes that indicate the start and end states of the animation’s style, as well as possible intermediate waypoints. There are three key advantages to CSS animations over traditional script-driven animation techniques: They’re easy to use for simple animations; you can create them without even having to know JavaScript. Configuring the animationEdit To create a CSS animation sequence, you style the element you want to animate with the animation property or its sub-properties. animation-delay ExamplesEdit

CSS Filters CSS filter support recently landed within WebKit nightlies. CSS filters provide a method for modifying the rendering of a basic DOM element, image, or video. CSS filters allow for blurring, warping, and modifying the color intensity of elements. Let's have a look at how CSS filters work and how you can quickly create elements that are beautifully filtered! There are many CSS filters to choose from: grayscale, blur, sepia, saturate, opacity, brightness, contrast, hue-rotate, and invert. The following CSS snippet will blur an element: Multiple filters are separated by spaces, so we could also add grayscale and opacity values to the blur: Let's get crazy with hue-rotate as well: If static filtering isn't enough for you, CSS filters also animate with @-webkit-keyframes: Expect a performance hit with heavy CSS filter usage; be sure to heavily test your site wherever filtering is used.

A Whole Bunch of Amazing Stuff Pseudo Elements Can Do By Chris Coyier On June 13, 2011 It's pretty amazing what you can do with the pseudo elements ::before and ::after. For every element on the page, you get two more free ones that you can do just about anything another HTML element could do. They unlock a whole lot of interesting design possibilities without negatively affecting the semantics of your markup. Here's a whole bunch of those amazing things. A roundup, if you will. #Give you multiple background canvases Because you can absolutely position pseudo elements relative to their parent element, you can think of them as two extra layers to play with for every element. #Expand the number of shapes you can make with a single element All of the shapes above and many more can be created with a single element, which makes them actually practical. Here's an example of a six-pointed star: #Show URL's of links in printed web pages #Clear floats #Simulate float: center; #Label blocks of code with the language it is in #Create an entire icon set