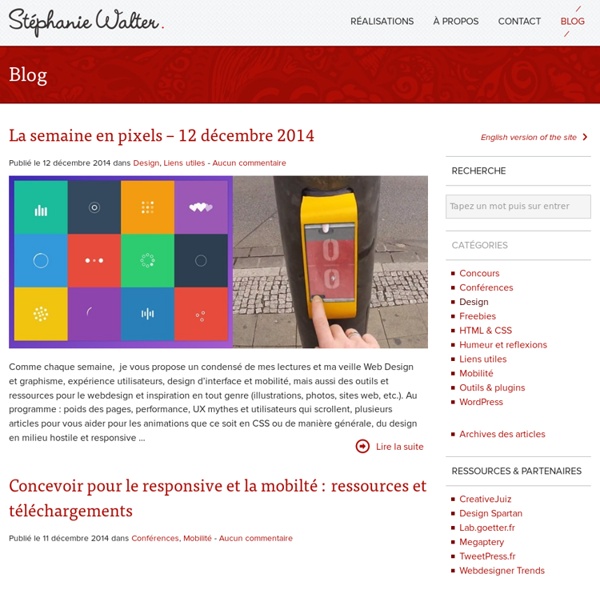 Blog - Denise Jacobs The landscape of business has changed dramatically over the past several years. For decades, the focus has been on cost control and technology, whereas the current business climate has prompted a paradigm shift. Success for companies in the 21st century is now dependent upon creativity and innovation, both hailed as the most important contributors to the growth of the economy. Read More While speaking at the AngleBrackets Conference in Orlando a couple of weeks ago, I had the great fortune of finally getting a chance of sitting down for a chat about creativity with my awesome and wonderful friend Scott Hanselman for his podcast, Hanselminutes: Fresh Air for Developers.

13 killer website galleries to inspire your designs Website galleries, aka CSS galleries: they're a great source of ideas, as well as keeping us abreast of the latest web design trends. We all have our go-to web design gallery for quick inspiration when the brief drops on your desk - but are there other sites you might not know about, that could be even more useful? Don't miss this! Galleries come in all shapes and sizes with hundreds popping up every day it's hard to sift through the low-quality ones to find the real gems. Here's 13 that are definitely worth considering to bookmark...

Bosonic Web Component Flash message Display an info message that automatically disappears after 2 secs: Show message Modal Google's Guide To Designing With Empathy With a price tag that's already set records by being $1.6 billion over-budget, mass outbreaks of the Zika virus, and water-sport venues that are allegedly teeming with human excrement, the Rio 2016 Olympic Games are already looking like the biggest planning disaster in IOC history—and this, just two years after Sochi. But it's not all bad. As part of the $12 billion budget attached to the Olympic Games, Rio has built 11 new sports facilities, ranging from a whitewater water park and a bitchin' BMX stadium to a massive new tennis center and a trio of multi-use sports arenas. And unlike past Olympic games, most of these structures will be permanently integrated into Rio's urban fabric, giving Brazilian athletes, students, and the general public places to swim and play for years to come. Ahead of today's torch-lighting ceremony, here are the 11 new stadiums, parks, and venues you'll be getting to know over the course of this year's Summer Olympic and Paralympic games. The Carioca Arenas

Coding High density retina displays or screens, like Apple’s Retina Display, have lots of pixels in a small space that it is almost impossible see the pixelation, thus, displaying smoother images and texts. Although Apple offered it first on the market, manufacturers have been releasing similar devices recently to compete with Apple. When using Retina Display devices, you can see that other sites online appear blurry. Créer une application de bureau native avec NW.js The NW.js project lets you create apps with full native capabilities in HTML, CSS and JavaScript. Even better, it lets you access any Node.js modules directly from the browser environment. This means your web-based app can now retrieve input from sensors or control hardware devices. This is the perfect environment for physical computing projects!

The Society Inc The history of The Rocks has always sparked my imagination . It started when I read ‘Playing Bettie Bow’ at school & continued with my study of Australian history . It evokes the mysteries of times long ago , with it’s sandstoned paved ways , side alleys , tunnels & beautiful buildings I have refreshed a secret place , down nurses walk & up a unassuming flight of stairs . It is named after the mistress of a merchant – a romantic tragedy involving class, adventure & true love!