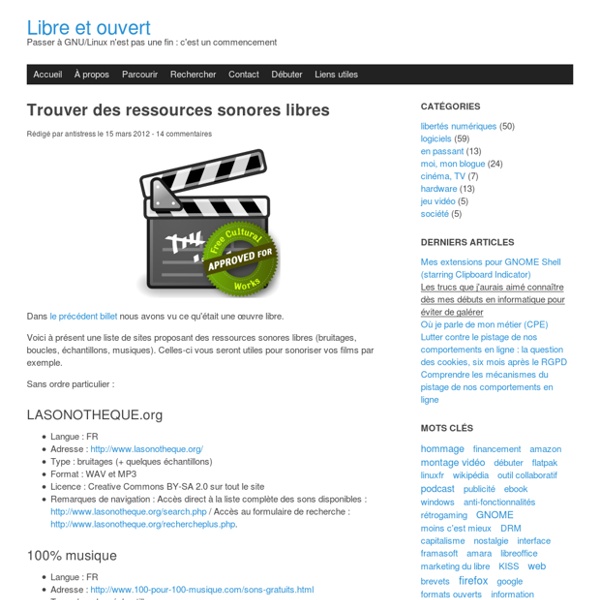 Royalty Free Music - Browse by Collection ↓ Skip to Main Content Choose a Collection to View Download all of the music on this site at once! Complete incompetech mp3 files - $48 Create Stunning Book Trailers Make book trailers so beautiful that they’re irresistible. Create them in no time with the Biteable video maker. What style of book trailer are you making? How to make a book trailer in a few clicks 78 RPMs and Cylinder Recordings : Free Audio : Free Download, Borrow and Streaming Newest uploads! Auto-78-twitter .&nbsp; Through the Great 78 Project the Internet Archive has begun to digitize 78rpm discs for preservation, research, and discovery with the help of George Blood, L.P. . 78s were mostly made from shellac, i.e., beetle resin, and were the brittle predecessors to the LP (microgroove) era.&nbsp;&nbsp; @great78project for uploads as they happen. Turntable used for 78rpm digitization of four simultaneous recordings with different needles.

eXe The eXe project developed a freely available Open Source authoring application to assist teachers and academics in the publishing of web content without the need to become proficient in HTML or XML markup. Resources authored in eXe can be exported in IMS Content Package, SCORM 1.2, or IMS Common Cartridge formats or as simple self-contained web pages. eXe grew out of the ​New Zealand Government Tertiary Education Commission's eCollaboration Fund and was led by the ​University of Auckland, ​The Auckland University of Technology, and Tairawhiti Polytechnic. It was later supported by ​CORE Education, a New Zealand-based not-for-profit educational research and development organisation. It has also been greatly assisted by a global group of participants and contributors. eXe was named a finalist in the New Zealand round of the ​IMS Global Learning Impact Awards 2008 and went on to claim a Leadership Award at the international judging.

Safety Last, the 1923 Movie Featuring the Most Iconic Scene from Silent Film Era, Just Went Into the Public Domain Safety Last, the 1923 film starring Harold Lloyd, features one of the most iconic scenes from the silent film era. Writes Roger Ebert, the scene above is "by general agreement the most famous shot in silent comedy: a man in a straw hat and round horn-rim glasses, hanging from the minute hand of a clock 12 stories above the city street. Strange, that this shot occurs in a film few people have ever seen.