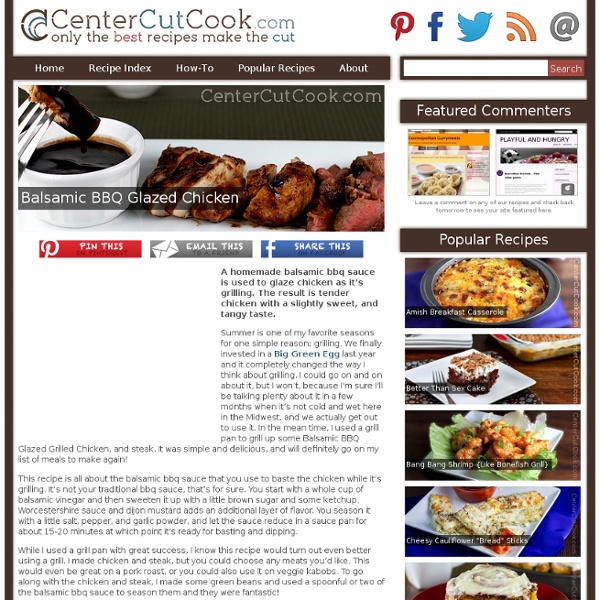 A homemade balsamic bbq sauce is used to glaze chicken as it’s grilling. The result is tender chicken with a slightly sweet, and tangy taste. Summer is one of my favorite seasons for one simple reason: grilling. We finally invested in a Big Green Egg last year and it completely changed the way I think about grilling. I could go on and on about it, but I won’t, because I’m sure I’ll be talking plenty about it in a few months when it’s not cold and wet here in the Midwest, and we actually get out to use it. In the mean time, I used a grill pan to grill up some Balsamic BBQ Glazed Grilled Chicken, and steak. This recipe is all about the balsamic bbq sauce that you use to baste the chicken while it’s grilling. While I used a grill pan with great success, I know this recipe would turn out even better using a grill. Is anyone else just itching for Spring to arrive? Prep Time: 5mn Cook Time: 35mn Total Time: 40mn

Steak au Poivre - The Showstopper I have a comment on this comment, then I have a comment for the OP. To Amy: Removing to foil is simply a way to keep the steaks warm whilst resting (FOR 5 MINUTES AT LEAST… ALWAYYYS!). When the OP says remove to foil, he/she doesn’t mean to wrap them tightly. They mean to place them in a plate, and form a loose ‘covering’ of foil. This will simply trap some of the heat and allow it to remain warm, without trapping too much moisture. To the OP and to anyone else who decides to try ‘flambe’: Poor Student's Cookbook Rating: 9.6/ 10 (10 votes cast) Never before in my life have I had authentic Cajun food. So how could I tell that the roast chicken I made today was authentically Cajun? I couldn’t.

Pierogi Recipe October 2, 2010 My mom is obsessed with keeping a stocked freezer, but I guess I don’t really take after her, because my freezer tends to be relatively empty, aside from random containers of stock/ramen broth, frozen dumplings and pierogi. I admit, I store buy frozen chinese dumplings and pierogi for those times that I just don’t feel like cooking. I tell myself it’s because of ease and convenience, but really, I just love the taste of frozen pockets filled with deliciousness. Pierogi are fast, tasty, and ideal for when I let myself get too hungry and become a crazy unthinking monster. (This happens more often than you would believe).

Kitchen Helpers I found these helpful charts last week and just had to share! Both of these beauties are from Chasing Delicious (aka one of the most fab foodie blogs out there)! Aren’t they faaaaabulous?! Buy them here. Relish - An M.V.P. Now Sidelined Dominic Perri for The New York Times relish at Whitman's Whitmans in the East Village makes relish with local ingredients. As another baseball season kicks off, one upside is that relish fans like me can reliably find it among the hamburger and hot dog toppings at ballparks.

Magic Sauce Recipe I call this the magic sauce recipe. In part, because it makes everything it touches shimmer with deliciousness. It's magic like that. Technically, it's a riff on a chimichurri sauce - one that veered off the rails in a big way. Much tweaking has rendered it a distant second cousin. If that. Poor Student's Cookbook Rating: 8.9/ 10 (10 votes cast) Well folks, after the nearly two week hiatus, I have returned. I was super busy moving into my new apartment and starting school that I didn’t get a chance to update the cookbook. How to make black garlic Black garlic is a traditionally Korean specialty that is also becoming common in North America. While it may be simple to purchase pre-packaged black garlic, it can be more rewarding to make your own at home. Once your garlic is ready, you can use it in all sorts of dishes such as pasta, hummus, pizza or stir-fries. Fermenting the garlic is a simple process but it does take a long stand-by time, so be prepared to wait a while for your black garlic to be ready. 1,Put as many whole, unpeeled garlic bulbs as you would like in your container. The container can be any material that is safe for the oven, and should be big enough to hold the amount of garlic you want to make.

All About Beer If you are easily offended, maybe you had better go BACK!!! Stage 1 - SMART This is when you suddenly become an expert on every subject in the known Universe. You know you know everything and want to pass on your knowledge to anyone who will listen. At this stage you are always RIGHT.