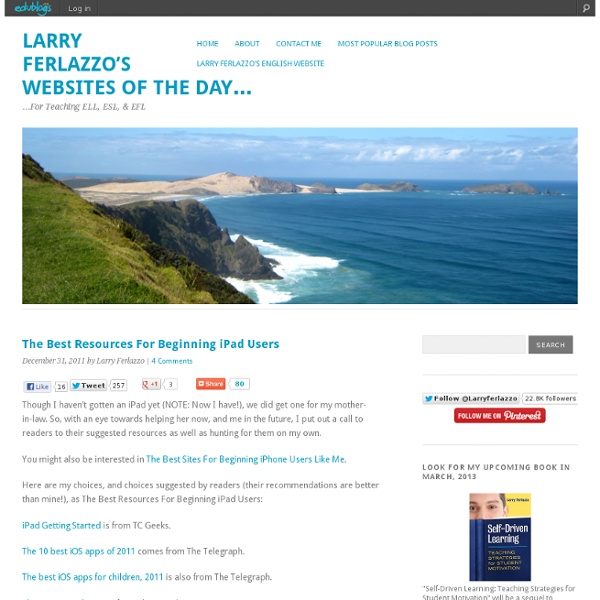 Though I haven’t gotten an iPad yet (NOTE: Now I have!), we did get one for my mother-in-law. So, with an eye towards helping her now, and me in the future, I put out a call to readers to their suggested resources as well as hunting for them on my own. You might also be interested in The Best Sites For Beginning iPhone Users Like Me. Here are my choices, and choices suggested by readers (their recommendations are better than mine!), as The Best Resources For Beginning iPad Users: iPad Getting Started is from TC Geeks. The 10 best iOS apps of 2011 comes from The Telegraph. The best iOS apps for children, 2011 is also from The Telegraph. The top 50 iPad apps is from The Guardian. Choosing the Right Keyboard For Your iPad is from Read Write Web. The Best iPad Apps: 10 Essential Apps For The New iPad You Got For The Holidays is from The Huffington Post. Educreations lets you easily create video lessons. iPads In The Art Room APPiticdescribes itself as: Here are great suggestions from readers:

A Comprehensive Guide for Effective Use of iPad in Teaching iPad, this mystic gadget that has been making the news since its launch a few years ago, has now secured a strong foothold inside different educational settings. Its sharp design, practical portability, and the sublime sense of mobile gadgetry it bestows upon its users and, above all, its widespread among learners , all of these factors combined made this tablet an indispensable tool in the learning toolkit of students. With this huge presence inside our schools, several school districts have finally adopted it as a teaching and learning tool to be used inside the classroom.

Top 200 best iPad apps 2011 If you've got yourself an iPad Air or new iPad mini, you'll want to start downloading the best iPad apps straight away. And if you already have an iPad 4 or older iPad, you might want to update it with some new apps. It's the apps that really set iOS apart from other platforms - there are far more apps available on the App Store for the iPad than any other tablet. So which which ones are worth your cash? And which are the best free apps?

Year of the iPad 2 The late Steve Jobs called 2011 "the year of the iPad 2" and almost a year after it was introduced, almost 2 years after the original iPad was introduced, it remains a product selling in the tens of millions with absolutely no competition in sight. And that's a shame because, as a consumer, the one thing I want most is strong, meaningful competition for the iPad. It's become a cliche to say "there's no tablet market, there's only an iPad market", but like most cliches there's more than a little truth to it. Very few people want a tablet. Ten Simple Strategies for Re-engaging Students Updated 01/2014 Last week I observed a tired classroom. My English 101 class looked bored and uninterested in the discussion we were having. I observed one student intently working on a crossword puzzle.

The Top 10 Education APIs (And Why They’re Important) First off, what is an API? API stands for A pplication P rogram I nterface. It’s a tool which allows web applications (websites and apps to the layman) to communicate with each other and share information stored in each other’s databases. This information can then be incorporated into new and different projects. How APIs Work (Simple Version) The Best Free iPad and iPhone Kids' Apps According to Apple EmailShare 18EmailShare There’s a difference between popular kids’ apps and games that grab the world’s fancy momentarily, and the best kids’ apps and games that become all-time favorites, classics and “must-haves.” So which type of kids’ apps do you seek? Either way, Apple’s got you covered. With some overlap, the App Store lists them separately. You’ll find popular kids’ apps robotically listed in Top 25 or Top Charts lists.

Drawing on the iPad See how these 12 compare to other styluses: Check out our in-depth iOS stylus charts. Steve Jobs may hate the idea of using a stylus on his touchscreen devices, but the fact remains that some consumers simply prefer an intermediary accessory for interaction. Whether it’s too cold outside for direct contact, you’re worried about touchscreen germs, or you need a sketching tool, sometimes a stylus can be a good thing. Accessory manufacturers seem to agree, having produced a plethora of styluses for Apple’s iOS devices. As some people know, in my not-so-secret other life, I enjoy drawing cartoons.

Tips - How to Involve and Engage Students Student misbehavior isn't always about bad attitudes and "keeping reps" (reputation). Many times student misbehavior in the classroom happens because of boredom. When students are bored in class their brains begin to wander and they start thinking, "I wonder what would happen if I…" Then the little disruptions begin. The little disruptions pile up and turn into large disruptions. Design Thinking Workshop for Educators: Applying Creative Problem Solving to Classrooms 7.30.12 | Edutopia today launched a free online workshop, “Design Thinking for Educators,” to help educators consider how design thinking—a problem-solving process built around five stages—might be applied in the classroom and in their professional lives. Developed in collaboration with IDEO and Riverdale Country School, a pre-K-12 independent school in New York City, the workshop is scheduled for five weeks but can be completed at any pace. Included is a free, downloadable Design Thinking Toolkit—94 pages that take users through the key steps involved in defining a challenge and building a solution: discovery, interpretation, ideation, experimentation, and evolution. Workshop participants can also join collaborative design challenges and weekly online brainstorms.

iPads in Guided Reading Before a class set of iPads I was differentiating my literacy centers for guided reading. Here were some of literacy centers and how I differentiated them: 1. Word Study--At the beginning of the year, it is beginning sounds. The 10 Comandments of iPad Tablets We all have probably heard the story of Moses, bringing down the 10 commandments on two stone tablets from Mount Sinai, but there are also commandments that apply to our iPad tablets. Here are the top 10. 1. Thou shalt keep thy iPad fully charged.

How Do We Know When Students Are Engaged? (Updated 11/2013) Educational author and former teacher, Dr. Michael Schmoker shares in his book, Results Now, a study that found of 1,500 classrooms visited, 85 percent of them had engaged less than 50 percent of the students. In other words, only 15 percent of the classrooms had more than half of the class at least paying attention to the lesson. Looking Back At Year One of 1:1 (With iPads) - Part One As I look to unplug a bit during the first week of summer vacation, I am continuing to repost my top posts from last year. Below is #6 from last June. As I reflect on our first year as a 1:1 school, I am overwhelmed by the insights that we gained after distributing over 1,000 mobile devices to our students in grades 9-12.