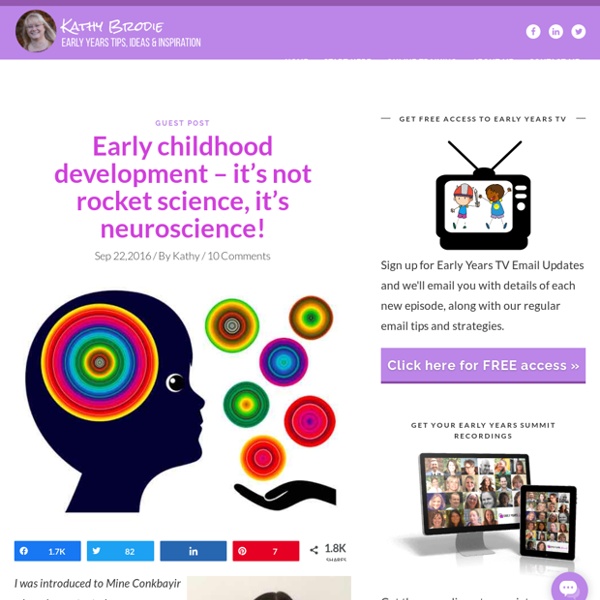 I was introduced to Mine Conkbayir when she contacted me about neuroscience informing early years practice, which I think is such an exciting, and growing, area of study. So I was very enthusiastic when she offered to do a guest post on this subject. Here she discusses how neuroscience can add another dimension to our understanding of child development: Like many individuals in this increasingly frantic world, I’m often busy juggling my responsibilities as a parent while I work and continue my studies – a very exciting journey as I try to achieve my PhD in early childhood education and neuroscience. Having been a lecturer across a range of child care and education qualifications for the past 14 years, I continue to be bewildered by the lack of consistently embedded teaching of neuroscience and early brain development across these qualifications. You may well ask ‘how?’ Here are just a few key messages from neuroscience which can inform how we care for and educate our youngest: References:

6 Types of Play: How Children's Play Becomes More Social Play is a serious business. The pioneering developmental psychologist Lev Vygotsky thought that, in the preschool years, play is the leading source of development. Through play children learn and practice many basic social skills. They develop a sense of self, learn to interact with other children, how to make friends, how to lie and how to role-play.

Let's Talk What do babies need in order to learn and thrive? One thing they need is conversation — responsive, back-and-forth communication with their parents and caregivers. This interactive engagement is like food for their developing brains, nurturing language acquisition, early literacy, school readiness, and social and emotional well-being. How can young children best learn languages? The British Council's Tracey Chapelton explains how parents of young children can lay the foundations for success. Children's brains are highly active Your child is unique, but what all children have in common is natural curiosity and an innate ability to learn. Kuhl states that babies and young children are geniuses at acquiring a second language.

How do you speak 'Motherese'? News BBC News Navigation Sections Previous Next Primary school shake-up to focus on ‘play-led’ learning Children at primary schools would not study traditional subjects until as late as 10 years of age, under proposals being considered by policymakers. Instead, there would be a much greater emphasis on creative play during the early years of primary school, and broader areas of learning in later years. The reforms are based loosely on some of the features of top-performing education systems in countries such as Finland, as well as new research on how children learn.

Why does my toddler love repetition? Paediatric speech and language therapist It may test your patience when your toddler demands 'Row, row, row your boat' for the 10th time. But there's a good reason for her insistence. Toddlers love repetition because it helps them to learn, and because it's familiar and comforting. IELTS test format explained You will talk to a certified examiner in the IELTS Speaking test. The test is interactive and as close to a real-life situation as a test can get. A variety of accents may be used, and the test will be recorded.