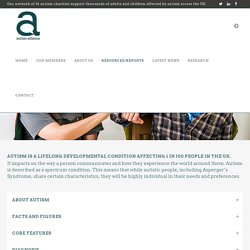 Autistic people can have an uneven cognitive profile. They can have very good communication skills and interaction skills but struggle with severe sensory issues and need a lot of structure in their daily routines. Others may be completely non-verbal but have mastered other forms of communication such as using an assistive and augmentative communication device. They may still struggle with understanding the complexities of a conversation, but have very few sensory issues. It is extremely important to consider the impact of stress on a autistic person. Communication Communication is the exchange of information by speaking, writing or other methods. Processing delay This means that it takes longer to take in and process information they are given. Supporting a person with a processing delay Literal understanding Supporting a person with literal understanding. Never Knowing Why - Brody, Me & GDD - Undiagnosed Parenting. How can he be undiagnosed? 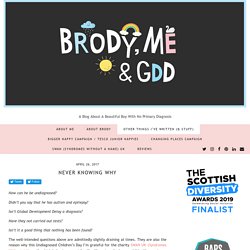 Didn’t you say that he has autism and epilepsy? Isn’t Global Development Delay a diagnosis? Have they not carried out tests? Mindfulness-based Training in Preservice Teacher Education Leads to Improvements in Classroom Teaching Practices - Center for Healthy Minds. In the study, researchers randomly assigned 88 early education preservice teachers to either standard teacher education — or teacher education plus a nine-week mindfulness-based intervention. 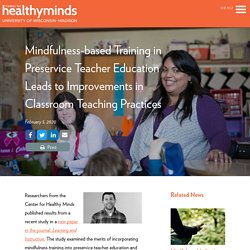 Researchers utilized the Classroom Assessment Scoring System (CLASS), a validated measure of effective classroom teaching behaviors, to look at teaching practices at baseline and again at a six-month follow-up that occurred during full-time student teaching. Similarly, mindfulness, negative affect and well-being were assessed at baseline, post-test and follow-up. The results indicated that the educators who took part in the nine-week, mindfulness-based intervention fared better in all the major CLASS domains: instructional supports; emotional supports; and classroom organization.

The National Autistic Society. Autism and the difficulty of classification. Shannon Des Roches Rosa, Author at Spectrum. Moodle. ASD Validity. Autism Spectrum Disorder in DSMs and ICDs. The American Psychiatric Association (APA) released the Diagnostic and Statistical Manual of Mental Disorders, 5th edition — known as the DSM-5 — on 13-May-2013. 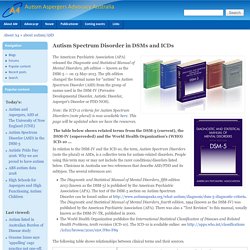 This page will be updated when we have the resources. ADHD Parents' Medication Guide: What You Need to Know. Get the Right Diagnosis (and Treatment) for Your Child The numbers tell the story: according to the Centers For Disease Control, 6.4 million children ages 4-17 have been diagnosed with ADHD. 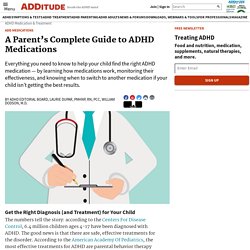 The good news is that there are safe, effective treatments for the disorder. According to the American Academy Of Pediatrics, the most effective treatments for ADHD are parental behavior therapy and/or ADHD stimulants for children over age six. Experts know, from years of research and many studies, that ADHD stimulants work. They improve the core symptoms of ADHD — impulsivity, hyperarousal, and distractibility — in some 70-80 percent of the people who take them. Nail Down the Diagnosis Getting the correct diagnosis is the foundation of successful treatment. Medication and Dose When you and your child’s doctor are confident of the diagnosis, and you decide to start your child on medication, understand that you must work closely with your doctor to find the optimal medication and dose. Learning That Medicating Children with ADHD Isn't All Bad. The Monday after winter break, the day my kids were supposed to go back to school, was a really fabulous morning. 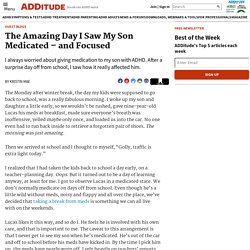 I woke up my son and daughter a little early, so we wouldn’t be rushed, gave nine-year-old Lucas his meds at breakfast, made sure everyone’s breath was inoffensive, yelled maybe only once, and loaded us into the car. No one even had to run back inside to retrieve a forgotten pair of shoes. The morning was just amazing. Thousands of autistic girls and women 'going undiagnosed' due to gender bias. Hundreds of thousands of girls and women with autism are going undiagnosed due to it being viewed as a “male condition”, according to one of the UK’s leading neuroscientists. 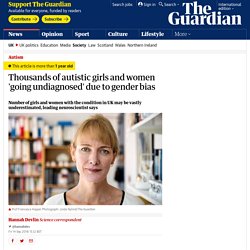 Prof Francesca Happé, director of the Social, Genetic & Developmental Psychiatry Centre at King’s College London, warned that the failure to recognise autism in girls and women was taking a stark toll on their mental health. “We’ve overlooked autism in women and girls and I think there’s a real gender equality issue here,” she said.

Effects - Issues - Research Autism. Effects Anxiety can cause all sorts of problems for people on the autism spectrum, their families and carers, and society as a whole. 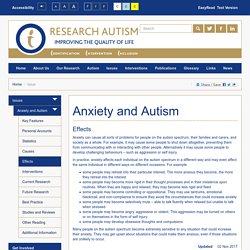 For example, it may cause some people to shut down altogether, preventing them from communicating with or interacting with other people. Alternatively it may cause some people to develop challenging behaviours – such as aggression or self injury. In practice, anxiety affects each individual on the autism spectrum in a different way and may even affect the same individual in different ways on different occasions. For example some people may retreat into their particular interest. Many people on the autism spectrum become extremely sensitive to any situation that could increase their anxiety. An Autistic Burnout – The Autistic Advocate. I’ve struggled massively with writing this. 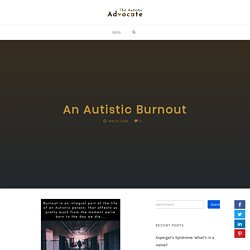 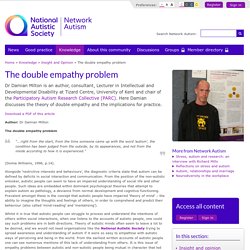 Here Damian discusses the theory of double empathy and the implications for practice. Author: Dr Damian Milton. Clinically Significant Disturbance: On Theorists Who Theorize Theory of Mind. I. Admittance During my second week as a new faculty member, I was involuntarily committed to the psych ward at the university hospital. Moodle. Temple Grandin: The world needs all kinds of minds. Myths About Autism - Research Autism. There are many myths and misconceptions about autism. Here are some of them. Autism is the childhood form of schizophrenia Some early researchers believed that autism was the childhood form of schizophrenia. This explains why it was sometimes called 'infantile psychosis.' MMR vaccine ‘does not cause autism’ There is no evidence for a link between the MMR jab and autism, say The Guardian and other news sources. The reports are based on a study that is the “biggest review conducted to date”, analysing “the blood from 250 children and concluded that the vaccine could not be responsible”.

The jab has been linked to autism since 1998, when a study of 12 children published in The Lancet linked the measles, mumps and rubella (MMR) jab to the development of autism. That research has since been discredited and two major studies have been published subsequently which also failed to show any link. In this latest UK study, researchers investigated whether the MMR vaccine contributes to the development of autistic spectrum. How do you become you? Obsessions, repetition, routines. Obsessions, repetitive behaviour and routines can be a source of enjoyment for autistic people and a way of coping with everyday life.

But they may also limit people's involvement in other activities and cause distress or anxiety. Find out what you can do to help. Synaesthesia may be 'more common' in autism. "Study links synaesthesia to autism," BBC News reports. The news comes from the results of a small study that suggests that synaesthesia is more common in adults with autism (also known as autistic spectrum disorder). Synaesthesia is a condition where experiencing one sensation in one of the senses, such as hearing, involuntarily triggers another sensation in another sense, such as taste. An example given in the study for one person is that every time they heard the word "hello" they experienced the taste of coffee. The researchers explain that synaesthesia has been estimated to affect around 4% of the population and autism 1% of the population.

If the two phenomena were completely independent, you'd expect to see the same prevalence of synaesthesia in people with and without autism. However, this study, which involved screening people with and without autism for synaesthesia, showed this may not be the case. Sensory differences. Many people on the autism spectrum have difficulty processing everyday sensory information. OCD. Obsessive compulsive disorder (OCD) is a common mental health condition where a person has obsessive thoughts and compulsive behaviours. OCD can affect men, women and children.

Top 10 Inspirational People With Autism and Asperger Syndrome. Script written by Q.V. Moodle. Tizard Centre - Social Policy, Sociology and Social Research. Autism Education Trust – AET. 1 So what exactly is autism. ADHD: Everything You Need to Know. Attention deficit hyperactivity disorder (ADHD) is a mental health disorder that can cause above-normal levels of hyperactive and impulsive behaviors. Animated theory. Developing the Frith‐Happé animations: A quick and objective test of Theory of Mind for adults with autism - White - 2011 - Autism Research. It is now widely accepted that individuals with autism have a Theory of Mind (ToM) or mentalizing deficit. This has traditionally been assessed with false‐belief tasks and, more recently, with silent geometric animations, an on‐line ToM task.

In adults with milder forms of autism standard false‐belief tests, originally devised for children, often prove insensitive, while the Frith‐Happé animations have had rather better success at capturing the on‐line ToM deficit in this population. Theory of mind - Smarties task and Sally-Anne Task. Media Literacy – Levelling the Playing Field for People Living with Disability. Approximately 44 million Europeans are reported as living with a disability. This can often prevent them from taking a full part in society and economy, whether by way of education, employment and society more generally. These disabilities can take the form of a physical impairment or a mental illness or disorder which hinders basic function. It is difficult to live a full and active life when there are barriers to taking part in it.

If it is difficult simply to get out of bed and leave the house, if public transport doesn’t make allowance for wheelchairs, or provide information for visually impaired passengers, if the street is crowded and an Anxiety or Autistic Spectrum Disorder renders it intolerable, if the availability of public toilets is something that has to be factored in, or if a person simply can’t face another day in the classroom or office, being treated differently, discriminated against or overlooked. A Social (Support) Network. Augmentative and alternative communication. Techniques used for those with communication impairments An AAC user indicates a series of numbers on an eye gaze communication board in order to convey a word. Augmentative and alternative communication (AAC) encompasses the communication methods used to supplement or replace speech or writing for those with impairments in the production or comprehension of spoken or written language. Noah's Dad: A Blog About Down Syndrome With Videos And Pictures.