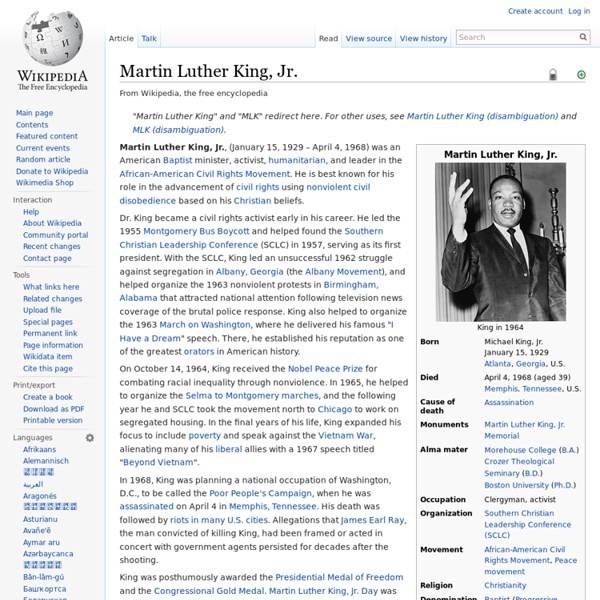 Dr. King became a civil rights activist early in his career. He led the 1955 Montgomery Bus Boycott and helped found the Southern Christian Leadership Conference (SCLC) in 1957, serving as its first president. With the SCLC, King led an unsuccessful 1962 struggle against segregation in Albany, Georgia (the Albany Movement), and helped organize the 1963 nonviolent protests in Birmingham, Alabama that attracted national attention following television news coverage of the brutal police response. King also helped to organize the 1963 March on Washington, where he delivered his famous "I Have a Dream" speech. There, he established his reputation as one of the greatest orators in American history. On October 14, 1964, King received the Nobel Peace Prize for combating racial inequality through nonviolence. In 1968, King was planning a national occupation of Washington, D.C., to be called the Poor People's Campaign, when he was assassinated on April 4 in Memphis, Tennessee. Doctoral studies Related:  Social change advocates

Mohandas Karamchand Gandhi Mohandas Karamchand Gandhi (pronounced [ˈmoːɦənd̪aːs ˈkərəmtʃənd̪ ˈɡaːnd̪ʱi] ( ); 2 October 1869 – 30 January 1948) was the preeminent leader of Indian nationalism in British-ruled India. Employing nonviolent civil disobedience, Gandhi led India to independence and inspired movements for civil rights and freedom across the world. The honorific Mahatma (Sanskrit: "high-souled", "venerable"[2])—applied to him first in 1914 in South Africa,[3]—is now used worldwide. Gandhi famously led Indians in challenging the British-imposed salt tax with the 400 km (250 mi) Dandi Salt March in 1930, and later in calling for the British to Quit India in 1942. Gandhi is commonly, though not officially,[10] considered the Father of the Nation[11] in India. Early life and background Mohandas Karamchand Gandhi in his earliest known photo, aged 7, c. 1876 The Indian classics, especially the stories of Shravana and king Harishchandra, had a great impact on Gandhi in his childhood. English barrister

I Have a Dream' - Martin Luther King Jr. (audio only) I am happy to join with you today in what will go down in history as the greatest demonstration for freedom in the history of our nation. Five score years ago, a great American, in whose symbolic shadow we stand today, signed the Emancipation Proclamation. This momentous decree came as a great beacon light of hope to millions of Negro slaves who had been seared in the flames of withering injustice. It came as a joyous daybreak to end the long night of their captivity. But one hundred years later, the Negro still is not free. One hundred years later, the life of the Negro is still sadly crippled by the manacles of segregation and the chains of discrimination.

Paulo Freire Paulo Reglus Neves Freire, Ph.D (/ˈfrɛəri/, Portuguese: [ˈpawlu ˈfɾeiɾi]; September 19, 1921 – May 2, 1997) was a Brazilian educator and philosopher who was a leading advocate of critical pedagogy. He is best known for his influential work, Pedagogy of the Oppressed, which is considered one of the foundational texts of the critical pedagogy movement.[1][2][3] Biography[edit] Freire was born September 19, 1921 to a middle class family in Recife, Brazil. Freire became familiar with poverty and hunger during the Great Depression of the 1930s. In 1931, the family moved to the less expensive city of Jaboatão dos Guararapes, and in 1933 his father died. In 1946, Freire was appointed Director of the Department of Education and Culture of the Social Service in the state of Pernambuco. In 1964, a military coup put an end to that effort. On the strength of reception of his work, Freire was offered a visiting professorship at Harvard University in 1969. In 1986, his wife Elza died.

The Law of Attraction In this post I want to describe what the Law of Attraction is, how you can use it to attract beautiful things to your life, and then attempt to explain how it works. If you have never heard about the law of attraction before, it may seem like a bizarre concept at first, but don’t let that prevent you from learning what could easily be one of the most important things you can learn in your life. To put it in simple words, the Law of Attraction states that your intentions become your reality, therefore the more you think about something, the more chances you have to bring it to reality. The Law of Attraction states that all the power comes from the universe, because at the lowest level, we are all made of the same thing: energy. Now, you can ignore how the law of attraction works at the lowest level, and still get all the benefits from it. Successful people have used the Law of Attraction for centuries to achieve the greatest results in history. This is the most interesting part for you.

José Mujica He has been described as "the world's 'poorest' president", due to his austere lifestyle and his donation of around 90 percent of his $12,000 (£7,500) monthly salary to charities that benefit poor people and small entrepreneurs.[1][2] Early life[edit] Guerrilla leader[edit] In the early 1960s, he joined the newly formed Tupamaros movement, an armed political group inspired by the Cuban revolution.[5] He participated in the 1969 brief takeover of Pando, a town close to Montevideo, and was later convicted by a military tribunal under the government of Jorge Pacheco Areco, who had suspended certain constitutional guarantees.[6][7] Mujica was captured by the authorities on four occasions, and he was among those political prisoners who escaped Punta Carretas Prison in 1971.[8] He was eventually re-apprehended in 1972, and was shot by the police six times. Minister of Agriculture[edit] Political positions[edit] Mujica's political ideology has evolved over the years from orthodox to pragmatist.

Cesar Chavez Cesar Chavez (born César Estrada Chávez, locally: [ˈsesaɾ esˈtɾaða ˈtʃaβes]; March 31, 1927 – April 23, 1993) was an American farm worker, labor leader and civil rights activist, who, with Dolores Huerta, co-founded the National Farm Workers Association (later the United Farm Workers union, UFW).[1] A Mexican American, Chavez became the best known Latino American civil rights activist, and was strongly promoted by the American labor movement, which was eager to enroll Hispanic members. His public-relations approach to unionism and aggressive but nonviolent tactics made the farm workers' struggle a moral cause with nationwide support. By the late 1970s, his tactics had forced growers to recognize the UFW as the bargaining agent for 50,000 field workers in California and Florida. Early life and education Chavez was born on March 31, 1927, in Yuma, Arizona, in a Mexican-American family of six children.[3] He was the son of Juana Estrada and Librado Chávez. Activism Worker's rights Immigration

PEACE Angela Davis Angela Yvonne Davis (born January 26, 1944) is an American political activist, scholar, and author. She emerged as a nationally prominent counterculture activist and radical in the 1960s, as a leader of the Communist Party USA, and had close relations with the Black Panther Party through her involvement in the Civil Rights Movement despite never being an official member of the party. Prisoner rights have been among her continuing interests; she is the founder of Critical Resistance, an organization working to abolish the prison-industrial complex. She is a retired professor with the History of Consciousness Department at the University of California, Santa Cruz, and is the former director of the university's Feminist Studies department.[2] Her research interests are in feminism, African-American studies, critical theory, Marxism, popular music, social consciousness, and the philosophy and history of punishment and prisons. Early life[edit] Davis attended Carrie A. Education[edit]

ThinkNice.com Quotes can pick you up when you are down, give purpose and meaning to those in need, and turn a bad day into a good one. Quotes also sometimes shed light onto the personalities of figures from the past and provide inspiration of all kinds. Below we have a collection of cute, inspirational and artistic quotes designed to be printed out and used as wall pin-ups. Enjoy! “You Are the Closest I Will Ever Come to Magic” “My attitude is based on how you treat me.” “If you wait for perfect conditions, you will never get anything done.” “Happy Girls Are the Prettiest” “Always believe that something wonderful is about to happen.” “Do What You Can with What You Have Where You Are” “The People Who Know The Least About You Always Have The Most To Say.” Albert Einstein Quote “Logic will get you from A to Z: Imagination will get you everywhere.” “Thou Shall Not Take Sh! “Your Face is Just Fine, But You’ll Have To Put A Bag Over That Personality.” “Just Because I Cannot See It, Doesn’t Mean I Can’t Believe It”

Thich Nhat Hanh Thích Nhất Hạnh (/ˈtɪk ˈnjʌt ˈhʌn/; Vietnamese: [tʰǐk ɲɜ̌t hɐ̂ʔɲ] ( ); born October 11, 1926) is a Vietnamese Zen Buddhist monk, teacher, author, poet and peace activist. He lives in the Plum Village Monastery in the Dordogne region in the South of France,[1] travelling internationally to give retreats and talks. He coined the term Engaged Buddhism in his book Vietnam: Lotus in a Sea of Fire.[2] A long-term exile, he was given permission to make his first return trip to Vietnam in 2005.[3] Nhất Hạnh has published more than 100 books, including more than 40 in English. Nhat Hanh is active in the peace movement, promoting non-violent solutions to conflict[4] and he is also refraining from animal product consumption as means of non-violence towards non-human animals.[5][6] Biography[edit] Buddha hall of the Từ Hiếu Temple Born as Nguyễn Xuân Bảo, Nhất Hạnh was born in the city of Quảng Ngãi in Central Vietnam in 1926. During the Vietnam War[edit] Establishing the Order of Interbeing[edit]