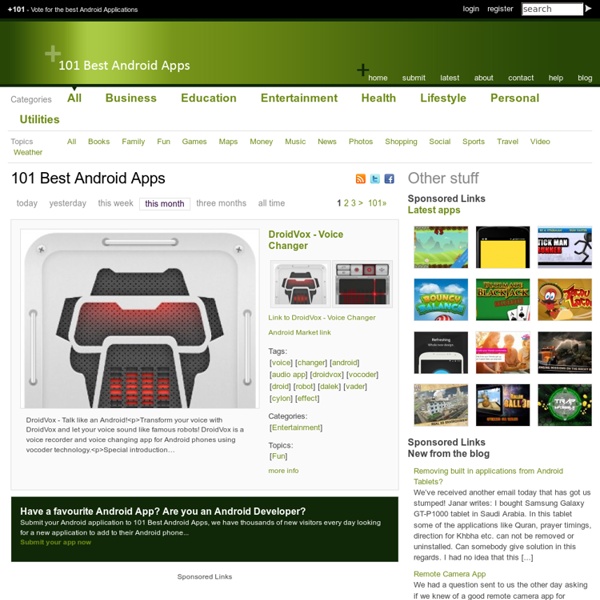 How to Get Better Battery Life from Your Android Phone "You don't need a task killer." I have a Sprint HTC Evo 4G, and Sprint's bloatware likes to start automatically on my phone and suck battery life. There is also no way to uninstall these apps unless I root my phone (which will happen very soon). DOWNLOAD An Android Guide : These Are The Droids You’re Looking For Learn everything you want to learn about Android, for free! This Android Guide”, by author Matt Smith, is another free manual from MakeUseOf.com. Outlining the ins and outs of Android, this guide covers basic everything from basic usage to rooting your phone, and is a must-have if you use Google’s smartphone OS. Android is among the most influential operating systems crafted this century. Along with iOS, it has paved the way for mobile devices that offer an unprecedented level of functionality. Currently Android is the most common mobile operating system — and there’s no sign that its popularity will wane anytime soon.

12 stunning Icon Packs for Android Phones Uploaded By@nicque Uploaded By@ratikant9 Uploaded By@sevimlibrad Uploaded By@laostia Uploaded By@lolo Uploaded By@noahsarc The rise of mobile apps and the decline of the open web — a threat or an over-reaction? As the use of mobile devices continues to climb, the use of dedicated apps is also increasing — but is this a natural evolution, or should we be worried about apps winning and the open web losing? Chris Dixon, a partner with venture-capital firm Andreessen Horowitz, argues in a recent blog post that we should be concerned, because it is creating a future in which the web becomes a “niche product,” and the dominant environment is one of proprietary walled gardens run by a couple of web giants — and that this is bad for innovation. Dixon’s evidence consists in part of two recent charts: one is from the web analytics company comScore, and shows that mobile usage has overtaken desktop usage — an event that occurred in January of this year. The second chart is from Flurry, which tracks app usage, and it shows that apps account for the vast majority of time spent vs. the mobile web, an amount that Flurry says is still growing.

The Room APK + OBB 1.07 The Room Description "The Room" is a very good puzzle game, this game is too test intelligence. The game player to find a variety of hidden clues, and then use them to open a sophisticated secret door. Unless you are a high IQ, or anyone who gets this game will be a time scratching their heads, you sort out their own ideas, with Xiao Bian into this ultimate mysterious room. The game uses a full 3D perspective can be rotated to bring the mysterious mystery puzzle experience, in the game as if the game player exposure to a dark room, in addition to requiring the player to the cabinet, surrounded by darkness, giving people Very mysterious feeling. Clear Storage Space on Your Phone Without Rooting “Low on space: Phone storage space is getting low.” Uh-oh. This issue is easy to fix if you’ve rooted your phone, but what if you haven’t? Let’s take a look at the possibilities… What’s the Big Deal? Does it really matter if you run out of internal phone storage?

Download APK For Free (Android Apps) Description Alternative appstore GetApk Market is an application that allows you to download Android apps or games full version via your smartphone. {{FEATURES}} # Get Download Apps and game # Easy to use # Paid apps for free # Free apps # and More {Requires Android 2.3 and up} Supported Android Version:- Froyo (2.2–2.2.3) . Gingerbread (2.3–2.3.7) . Honeycomb (3.0–3.2.6) .