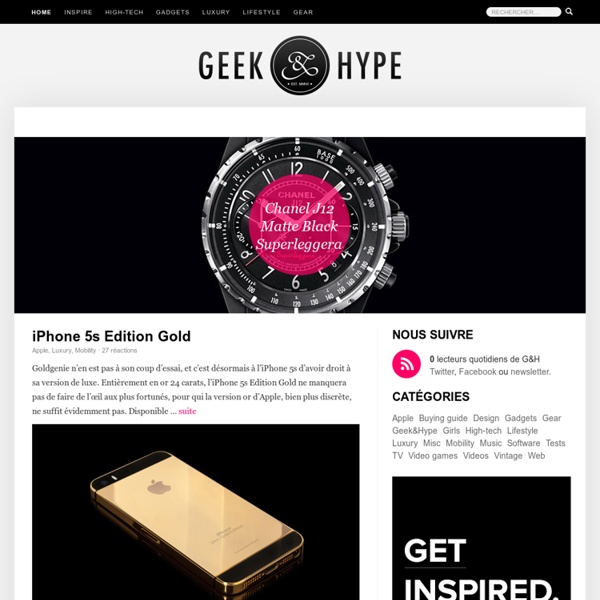 For Moody Tweeps: The Emoticon Keyboard It seems emoticons are taking over the world, doesn’t it? I put one in almost every one of my tweets, and I just love them. It’s crazy to me how much emotion a person can convey in a few symbols put together. It’s like another language. I’m also noticing in so many social apps that I download it asks, “Would you like to set your mood?” and it gives a selection of emoticons to choose from. 30 Bizarre and Creative Packaging Design Examples Inspiration November 1, 2010 One of the things that identifies the image of a product is its packaging. Few elements like striking graphics, attractive colors, and unusual shapes are carefully thought of to come up with packaging design that catches the attention of the consumers. A packaging design is a critical component in marketing because it is the packaging that makes it stand from the rest when consumers choose a product from the shelf.

Minimal Futuristic LED Watch with Time, Date, Alarm & Six Animations. Kisai Xtal. The mysterious Kisai Xtal watch combines a crystalline shaped stainless steel case with a faceted mineral crystal lens and a cryptic yet simple to read LED time display. Kisai Xtal includes two different time display modes, date mode, alarm, six different user-selectable animations and comes in a choice of four vivid LED colors in black or gold stainless steel. Choose Digital Time or Cryptic Time Designer & Art Toys, Figurines a Customiser, Graphic Design & Pop Culture. - Artoyz What is Artoyz ? Born from the mutual passion of 4 friends from graphic arts and toy figures, Artoyz was created on 2003 after the discovery of a new art trend coming from Asia : the designer toy or urban vinyl. Artoyz.com was the first entity to be born on 2003. Since day one we offer you a selection both eclectic and sharp for every purse based on toy design and graphic arts. Ok designer toy sounds cool, but what do you offer concretely?

Digital Content, Digital Advertising, Digital Marketing When The Atlantic ran the now infamous Scientology sponsored post, it inadvertently became the poster child for the worst thing to do for sponsored content. The firestorm of criticism highlighted an awkward fact: The Atlantic didn’t have clear policies on this still relatively new form of advertising content that intentionally blurs the line between editorial and advertising. As the industry grapples with the different definitions of sponsored content, there’s one thing everyone agrees on: Publishers must be transparent about what is and what isn’t sponsored. The debate is how to do it.

22 Cool Artworks Made from Computer Keyboards 22 Cool Artworks Made from Computer Keyboards Many decades ago, when typewriters were more common than the computer or its keyboard, learning how to type was a great deal. In fact, many people would enroll in typing classes so that they could learn how to type, which may now sound like an absurd idea. However, with the advent of computers a few decades ago, most people began to realize that the QWERTY keyboards aren’t exotic but were now here to stay. The 10 Best Marketing Blogs + Newsletters Anyone can label himself or herself a “content marketer” or a “social media expert.” On the internet, there’s a lot of junk out there coming from people who, quite frankly, don’t know what they’re talking about. NewsCred has filtered through the nonsense. We’ve found 10 of the best marketing blogs and newsletters around so that you don’t have to spend time differentiating the good from the bad.

Wanted: A Modernist Foosball Table Costs More Than a BMW [Video] The humble foosball table, that fixture of fraternity houses and tech startups, has just gone glam. After all, just because you read the Robb Report doesn't mean you can't appreciate the simple pleasures of slamming beers while bashing a little ball around, right? Now "The Beautiful Game," a glossy, chrome-limned $68,000 foosball table designed by Gro, provides plebeian amusement and patrician luxury at once.