Pearltrees Visualizes How You Organize the Web 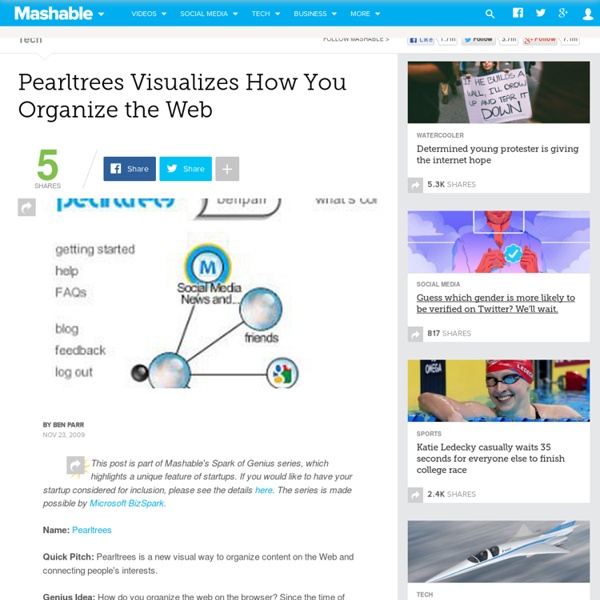 This post is part of Mashable's Spark of Genius series, which highlights a unique feature of startups. If you would like to have your startup considered for inclusion, please see the details here. The series is made possible by Microsoft BizSpark. Name: Pearltrees Quick Pitch: Pearltrees is a new visual way to organize content on the Web and connecting people's interests. Genius Idea: How do you organize the web on the browser? Signing up for Pearltrees is simple, but getting used to the interface and all of its features is not as easy. Now for the organization part: you can create complex systems of pearls, known as pearltrees. Clicking on a pearl gives you a range of options that go beyond visiting your favorite website. Pearltrees takes a time investment to make it useful. Spark of Genius Series Sponsored by Microsoft BizSpark Entrepreneurs can take advantage of the Azure Services platform for their website hosting and storage needs.

Pearltrees: A Design Interface for Remapping the Web - ReadWrite It's rare to look at a bookmarking tool and feel convinced that it's going to win a design award. Pearltrees is such a product. The French site offers us a new way to explore and contextualize the web. In what looks like a mind map structure, users collect "pearls" (links to articles, videos and web pages) and drag and drop them to form a body of knowledge that folds and expands upon itself. The Curation Buzz... And PearlTrees Posted by Tom Foremski - April 12, 2010 My buddy Dave Galbraith is the first person I remember to first start talking about curation and the Internet, several years ago. He even named his company Curations, and created a tool/site for curation: Wists. And his site SmashingTelly - is great example of curation, a hand-picked collection of great videos. Today, much is written about curation and the Internet but it all seems mostly talk because we don't really have the tools we need. Curation seems to be just a new way to describe things like blogging and "Editor's Picks."

Pearltrees Dives Into Social Curating With Pearltrees Team Content curation and mapping service Pearltrees has decided to focus on the fact that people want to do things in groups and has as of today upgraded its core product with a groups functionality, called Pearltrees Team. Now accesible just by logging in, Pearltrees Team allows you to hook up with other people in order to create a Pearltree collaboratively in realtime. Ideally this goes down as such: You really care about fashion so you search for fashion in the Pearltrees search box and are confronted with really elaborate visual cluster displays of fashion blogs, each blog its own “pearl.” You decide that anyone who likes The Sartorialist is probably a good egg and click on the puzzle piece in the Pearltrees detail window in order to ask if you can join the team.

PearlTrees - A Way To Curate Your Web Posted by Tom Foremski - March 5, 2010 I first met Patrice Lamothe, co-founder of PearlTrees in November and became fascinated with the PearlTrees service because of the many ways it can be used, and because it is an example of a media technology that is closely integrated into the way people are using the web. Since then, I've played around with PearlTrees and I can see lots of interesting uses for this technology, and its potential in creating a giant, curated web, one which goes beyond simple search, and beyond social tagging as in Delicious. And I'm excited now to be working with PearlTrees, as an advisor, in helping this startup grow to the next level. I'm very fortunate to that I can work with companies that interest me anyway, rather than having to work with companies that don't.

Move Over Harvard And MIT, Stanford Has The Real “Revolution In Education” Lectures are often the least educational aspect of college; I know, I’ve taught college seniors and witnessed how little students learn during their four years in higher education. So, while it’s noble that MIT and Harvard are opening their otherwise exclusive lecture content to the public with EdX, hanging a webcam inside of a classroom is a not a “revolution in education”. A revolution in education would be replacing lectures with the Khan Academy and dedicating class time to hands-on learning, which is exactly what Stanford’s medical school proposed last week.

Pearltrees: Bookmarking Program for Organization Lovers (This review is part of the Traveling Geeks tech tour of Paris. David Spark (@dspark) is the founder of Spark Media Solutions and a tech journalist that blogs at Spark Minute and can be heard and seen regularly on ABC Radio and on John C. Dvorak’s “Cranky Geeks.”) Social curation finds an audience: Pearltrees reaches 10M pageviews With its slick visual interface for bookmarking content, Pearltrees is unique enough that I’ve been both impressed and slightly skeptical that a mass audience will actually use it. But it looks like the site has found plenty of users. The French startup just announced that it crossed two big milestones in March: It has more than 100,000 users curating links, and it received more than 10 million pageviews. Not only does that show the concept is resonating, but it also suggests Pearltrees could reach the scale where it can build a real business around advertising or by offering premium accounts for publishers. When you share links on Pearltrees, they show up as little circles called Pearls.

Pearltrees brings curation to next level, adds Team feature As the Internet grows, finding content that's relevant to you becomes tougher. Sure, there's your basic Web search and then there's aggregation, similar to what Google and Yahoo do with news headlines. But another form of information discovery is starting to gain some momentum: curation. Just about a year ago, I wrote a post about a French company called Pearltrees, which was just launching a service that was best described as bookmarking, but with a social twist. Q&A: Patrice Lamothe of Pearltrees on personal organisation of t Believe me when I say you've never used a web application quite like pearltrees. With this application, you can literally map your personal web. Take all of the bookmarks scattered across your web browser, assign them a category and you've got a pearltree. It's a new way of seeing the web. Think of it as Web 2.5.

Open University launches British Mooc platform to rival US providers A UK-based platform for massive open online courses (Moocs) to rival established providers in the US has been launched by The Open University. Futurelearn will carry courses from 12 UK institutions (see list), which will be available to students across the world free of charge. It will follow in the footsteps of US providers including Coursera, edX and Udacity, which offer around 230 Moocs from around 40 mostly US-based institutions to more than 3 million students. The new platform will operate as an independent company, majority owned by The Open University, although details of other investors have yet to be confirmed. Simon Nelson, a key player in the development of BBC's online offerings, including the iPlayer, has been recruited to head up the new company. "There has been rapid and widespread growth in open online courses but until now UK universities have only had the option of working with US-based platforms," Mr Nelson said.

Pearltrees launches Twitter sync and reveals its social system [France] Paris-based Pearltrees has been catching interest around the web the last few days not least because a gaggle influential Silicon Valley bloggers have descended on Paris for Le Web, but mainly because of its interesting model for visually mapping how people collect and share information on the Web. But today the startup opens the kimono on its full system. They will announce two new things today: Twitter synchronization (enabling a user to create a pearl automatically from Twitter and to tweet automatically from their new Pearltrees), Pearltrees search, Real time discussion and connection. The other new aspect announced today on stage at Le Web is the Pearltrees Social System. But to explain first, here’s a new video they just released: Pearltrees is effectively visual social bookmarking and therefore has the potential to be more widely used than perhaps the traditional alternatives.

pearltrees, socializing and curating content on the web Content of any type is not useful unless you can find it, organize it and interact with it. In the enterprise companies have tried many different schemes to try and get business content collected in a central repository, organized, tagged, version controlled, and searchable. This has often taken the route of "content management" systems. Content management systems to varying degrees, do an adequate job of getting some content into a controlled system environment. There are challenges with content management systems on two fronts though, getting content into the system in the first place (getting employees to participate in inputting content in some way) and getting the right content into the hands of the person who actually needs it. Search helps find content and tagging can increase searchability of course, but the whole system is only as good as the ability to input and tag the content, which inherently requires broad participation.

Related:  WIP5 • anamarialeonte • brokenears • Beta Launch • People • Read It Later • programovani • pearltrees
Related:  Factory Launch   -  Can I launch a rocket?   -  PearlTrees: A Novel Approach To Human Mapping Of The Internet -SVW   -  Are any of these the Web's next big thing? - CNN.com   -  Meet Pearltrees: Bookmarks with a social twist | ZDNet   -  PearlTrees: Swing Between Related Content Like Tarzan | Fast Company | Business + Innovation   -  Twitter / Scobleizer: It's not often anymore that ...   -  Planets For Kids - Solar System Facts and Astronomy   -  The Solar System - Astronomy For Kids - KidsAstronomy.com