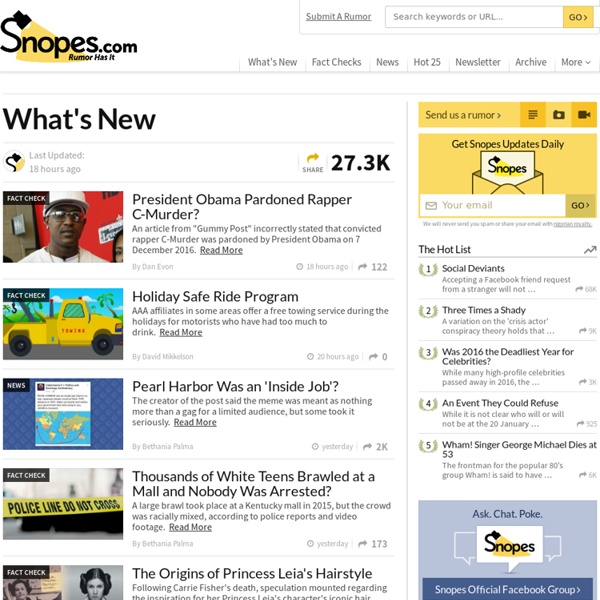 Beers & Probst: Responsible Reading and Fake News By Kylene Beers & Robert Probst How do we teach kids across the grades to read responsibly? Close attention to an author’s words – the responsibility a reader shows to the text – implies and requires a responsibility to oneself as well as the words on the page. Fake News: Recommendations - Media Literacy Clearinghouse If you read any news story about “fake news” in the past 18 months, you no doubt came across the phrase “media literacy.” From the various news stories and blog posts, I have compiled the following recommendations and advice. (NOTE: lesson plans, handouts and related videos are posted near the bottom of this list) Newest materials are posted last. Do you have suggestions for content that could be added here?

To Test Your Fake News Judgment, Play This Game : NPR Ed Fake news has been on Maggie Farley's mind further back than 2016 when President Trump brought the term into the vernacular. Farley, a veteran journalist, says we've had fake news forever and that "people have always been trying to manipulate information for their own ends," but she calls what we're seeing now "Fake news with a capital F." In other words, extreme in its ambition for financial gain or political power. "Before, the biggest concern was, 'Are people being confused by opinion; are people being tricked by spin?' 'Fiction is outperforming reality': how YouTube's algorithm distorts truth It was one of January’s most viral videos. Logan Paul, a YouTube celebrity, stumbles across a dead man hanging from a tree. The 22-year-old, who is in a Japanese forest famous as a suicide spot, is visibly shocked, then amused. “Dude, his hands are purple,” he says, before turning to his friends and giggling.

Library Creates Genius Bookmark To Teach Students How To Spot Fake News Though he's often wrong about his sources, President Trump is very right about one thing: there's a lot of fake news swirling around the internet these days. In fact, the problem has become so prevalent that many teachers are taking extra steps to ensure their students can tell which news is fake and which is real! For instance, Reddit user soldier4hire was at his local library when he noticed a unique bookmark.

Web Evaluation: Does This Website Smell Funny to You? One of my friends spent this past weekend working with her 2nd grade daughter on a research project. While her daughter flew through the arts and crafts portion and was able to handwrite the “sloppy copy” of her presentation, she struggled when it came to typing the final draft. She didn’t know where the period was. She didn’t know how to use the shift key (and then declared that turning caps lock on and off was far superior and easier than using the shift key). Renee Hobbs at the Media Education Lab It’s a great headline, isn’t it? As director of Data & Society Research Institute and author of It’s Complicated, danah boyd has a conflicted relationship with the media literacy community as is revealed in her post, “Did Media Literacy Backfire?” Indeed, researchers have found that media literacy can backfire when it’s taught badly. And because the effective deployment of the pedagogy of media literacy requires substantial knowledge, skills and habits of mind, it’s not always done well, as researchers have found that when media literacy is taught badly, it can have unintended consequences. But danah boyd makes no such assertion about the need for media literacy to be taught well. In fact, the essay contains not a single reference to media literacy pedagogy or practice.

Seven Ways to Identify Pseudoscience Original seven ways – © Relatively Interesting The use of psychobabble – words that sound scientific and professional but are used incorrectly, or in a misleading manner; Self-help books, folk and pop psychology, and motivational seminars often use psychobabble. Deepak Chopra is a name that comes to mind at present. Nothing more than a fraud according to Professor Jerry Coyne, one may delight in the Wisdom of Chopra which is a Twitter stream made up of seeming quotes that are randomly generated by words that can be found in his genuine Twitter stream. If anybody breathes prescient life into the words of the late Carl Sagan it is the scoundrel and intellectual mobster Deepak Chopra.

How To Spot Fake News Critical thinking is a key skill in media and information literacy, and the mission of libraries is to educate and advocate its importance. Discussions about fake news has led to a new focus on media literacy more broadly, and the role of libraries and other education institutions in providing this. When Oxford Dictionaries announced post-truth was Word of the Year 2016, we as librarians realise action is needed to educate and advocate for critical thinking – a crucial skill when navigating the information society. How to Spot Fake News Fake news is nothing new. But bogus stories can reach more people more quickly via social media than what good old-fashioned viral emails could accomplish in years past. Concern about the phenomenon led Facebook and Google to announce that they’ll crack down on fake news sites, restricting their ability to garner ad revenue. Perhaps that could dissipate the amount of malarkey online, though news consumers themselves are the best defense against the spread of misinformation. Not all of the misinformation being passed along online is complete fiction, though some of it is. Snopes.com has been exposing false viral claims since the mid 1990s, whether that’s fabricated messages, distortions containing bits of truth and everything in between.

Fighting Fake News Librarians—whether public, school, academic, or special—all seek to ensure that patrons who ask for help get accurate information. Given the care that librarians bring to this task, the recent explosion in unverified, unsourced, and sometimes completely untrue news has been discouraging, to say the least. According to the Pew Research Center, a majority of US adults are getting their news in real time from their social media feeds. The Long and Brutal History of Fake News The fake news hit Trent, Italy, on Easter Sunday, 1475. A 2 ½-year-old child named Simonino had gone missing, and a Franciscan preacher, Bernardino da Feltre, gave a series of sermons claiming that the Jewish community had murdered the child, drained his blood and drunk it to celebrate Passover. The rumors spread fast. Before long da Feltre was claiming that the boy’s body had been found in the basement of a Jewish house.

Search, fake news and politics - an international study How are people using search, social media and other forms of media to get information about politics, politicians and political issues? Are we right to be worried about the impact search algorithms have on shaping political opinions or about inaccurate, false and politically biased information that distorts public opinion? A study, conducted jointly by researchers from the Oxford Internet Institute (University of Oxford) and the Quello Center (Michigan State University) questioned 14,000 internet users from France, Germany, Italy, Poland, Spain, the UK and the USA about how they used traditional and online media. Search performance has the potential to support or undermine democratic processes.