Binary large object. A Binary Large OBject (BLOB) is a collection of binary data stored as a single entity in a database management system. 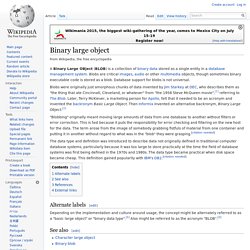 Blobs are critical images, audio or other multimedia objects, though sometimes binary executable code is stored as a blob. Database support for blobs is not universal. Blobs were originally just amorphous chunks of data invented by Jim Starkey at DEC, who describes them as "the thing that ate Cincinnati, Cleveland, or whatever" from "the 1958 Steve McQueen movie",[1] referring to The Blob.

Later, Terry McKiever, a marketing person for Apollo, felt that it needed to be an acronym and invented the backronym Basic Large Object. Mashup (web application hybrid) List of HTTP status codes. This is a list of Hypertext Transfer Protocol (HTTP) response status codes. 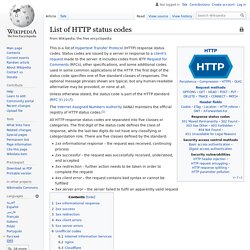 It includes codes from IETF internet standards, other IETF RFCs, other specifications, and some additional commonly used codes. The first digit of the status code specifies one of five classes of response; an HTTP client must recognise these five classes at a minimum. The phrases used are the standard wordings, but any human-readable alternative can be provided. Unless otherwise stated, the status code is part of the HTTP/1.1 standard (RFC 7231).[1] Octet (computing) Not to be confused with Octal. 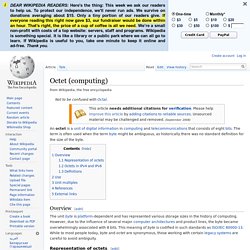 An octet is a unit of digital information in computing and telecommunications that consists of eight bits. The term is often used when the term byte might be ambiguous, as historically there was no standard definition for the size of the byte. Octets are often expressed and displayed using a variety of representations, for example in the hexadecimal, decimal, or octal number systems. The binary value of all 8 bits set (or turned on) is 11111111, equal to the hexadecimal value FF, the decimal value 255, and the octal value 377. Warez scene. History[edit] The Warez scene started emerging in the 1970s, it was used by predecessors of cracking and reverse engineering groups. 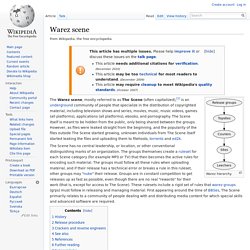 Their work was made available on privately run BBSes.[2] The first BBSes were located in the USA, but similar boards started appearing in Canada, the UK, Australia and mainland Europe. At the time setting up a machine capable of distributing data was not a trivial matter and required a certain amount of technical skill. The reason it was usually done was for technical challenge. The BBS systems typically hosted several megabytes of material. The demoscene grew especially strong in Scandinavia, where annual gatherings are hosted.[6] Release procedure[edit] The Scene currently has over 100 active groups releasing material. Crackers and reverse engineers[edit] Comparison of programming languages. Programming languages are used for controlling the behavior of a machine (often a computer). 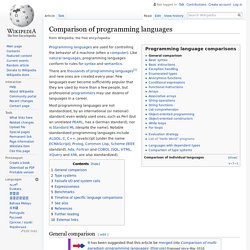 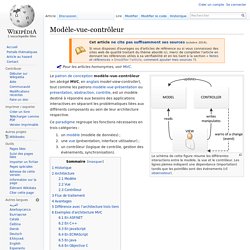 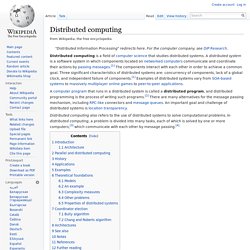 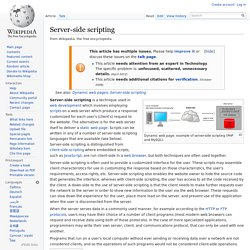 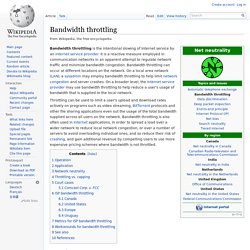 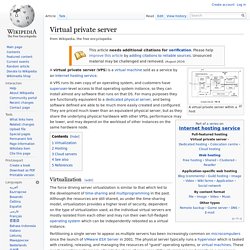 A VPS runs its own copy of an operating system, and customers have superuser-level access to that operating system instance, so they can install almost any software that runs on that OS. For many purposes they are functionally equivalent to a dedicated physical server, and being software defined are able to be much more easily created and configured.

They are priced much lower than an equivalent physical server, but as they share the underlying physical hardware with other VPSs, performance may be lower, and may depend on the workload of other instances on the same hardware node. Virtualization[edit] The force driving server virtualization is similar to that which led to the development of time-sharing and multiprogramming in the past. Hosting[edit] Web application. A web application or web app is any software that runs in a web browser. It is created in a browser-supported programming language (such as the combination of JavaScript, HTML and CSS) and relies on a web browser to render the application.[1][2][3] History[edit] In earlier computing models, e.g. in client-server, the load for the application was shared between code on the server and code installed on each client locally.

The Manifesto for Agile Software Development,[3] also known as the Agile Manifesto, was first proclaimed in 2001, after "agile methodology" was originally introduced in the late 1980s and early 1990s. The manifesto came out of the DSDM Consortium in 1994, although its roots go back to the mid 1980s at DuPont and texts by James Martin[4] and James Kerr et al.[5] History[edit] Incremental software development methods trace back to 1957.[6] In 1974, E. The Agile Manifesto[edit] Agile principles[edit] Continuous delivery. Continuous Delivery (CD) is a design practice used in software development to automate and improve the process of software delivery.

Techniques such as automated testing, continuous integration and continuous deployment allow software to be developed to a high standard and easily packaged and deployed to test environments, resulting in the ability to rapidly, reliably and repeatedly push out enhancements and bug fixes to customers at low risk and with minimal manual overhead. Profiling (computer programming) Profiling is achieved by instrumenting either the program source code or its binary executable form using a tool called a profiler (or code profiler).

Profilers may use a number of different techniques, such as event-based, statistical, instrumented, and simulation methods. "Program analysis tools are extremely important for understanding program behavior. Computer architects need such tools to evaluate how well programs will perform on new architectures. Software writers need tools to analyze their programs and identify critical sections of code. Symbolic link. Symbolic links operate transparently for most operations: programs that read or write to files named by a symbolic link will behave as if operating directly on the target file. However, programs that need to handle symbolic links specially (e.g., backup utilities) may identify and manipulate them directly. Algèbre de Boole (logique)