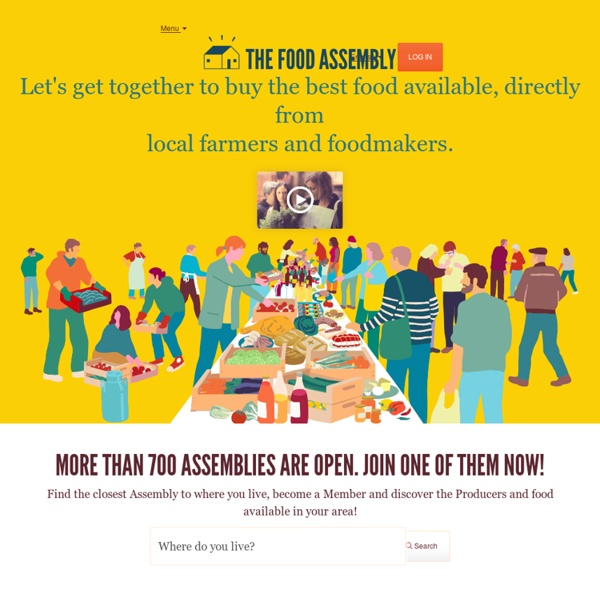 The connected company Many thanks to Thomas Vander Wal for the many conversations that inspired this post. The average life expectancy of a human being in the 21st century is about 67 years. Do you know what the average life expectancy for a company is? Surprisingly short, it turns out. Growing the Open Food Revolution The open food movement has been developing at a pace in recent months through projects like the Australian-based Open Food Network, a free and open source project aimed at supporting diverse food enterprises and making it easy to access local sustainable food. In this follow-up interview to our profile back in January, founders Kirsten Larsen and Serenity Hill reflect on their recent experience of OuiShare Fest 2014 and the open food revolution they are enabling through free software. The Open Food Network is currently running a crowdfunding campaign to put control of the food system back in the hands of farmers and eaters. Shareable: What are your main reflections and observations having returned from OuiShare Fest? Kirsten Larsen & Serenity Hill: There’s lots going on with a very diverse bunch under a big umbrella.

Botiful, social telepresence robot for Android by Claire July 25 : Botiful featured on TechCrunch, Gizmag, PCWorld, Engadget, Ziphi and DVIce ! July 17 update : Ahti Heinla, Co-founder and former chief architect of Skype is backing Botiful! Botiful is the first consumer tele-presence robot. With Skype as a simple interface you or your friends can control the robot and be remotely present from anywhere in the world. It's time to have a robot at home ! Be present with anyone, from anywhere ! Meta-currency - Rheonomy - Eric Harris-Braun In her beautifully insightful book, The Nature of Economies, Jane Jacobs suggests that we must broaden our understanding of economics in the context of the flow processes of the natural world. Near the end of the book one of her characters asks the question, “What are economies for?” One of the other characters answers:

Solutions Sustainia100 2016 This is the year of ‘Systemic Opportunity’! Now in its fifth year, the Sustainia100 has tracked more than 4,500 solutions to date from all over the world. Good Night Lamp by The Good Night Lamp team Keeping in touch with people has gradually become more than being “always on, sometimes off”. We would like to think that people can share parts of their lives with their families & loved ones in more subtle ways with the flick of a switch. A physical social network. Home alone. Ever wanted to keep an eye on a loved one who lives alone? Give them a Big Lamp and watch your Little Lamp turn on as they come home or go to bed. DriveNow: BMW / Sixt Joint Venture - car sharing The BMW Group and Sixt AG are planning a unique and innovative car sharing venture. With effect from April 2011 onwards – initially in Munich and later in Berlin – the two companies intend to join forces in offering a modern mobility concept under the brand-name DriveNow; this new product will combine vehicles and service of the highest quality with simple, flexible usage. DriveNow is the first car sharing concept to place an emphasis on efficient premium vehicles and comprehensive service. Vehicles may be hired and dropped off wherever the customer needs them, thus clearly differentiating DriveNow from products offered by other competitors. Sixt AG and the BMW Group intend to bundle their car sharing activities in the DriveNow joint venture, in which each company will hold a 50 percent stake.

The Sweet and the Brutal — Twee Culture, The Obama Doctrine, and Fractures in Ferguson I start this week’s call by noting an article in last Sunday’s New York Times style section entitled: The Millennials are Generation Nice, a psychographic snapshot of the 50 million Americans between the ages of 18 and 29. This latest generation of adults, likely mirrored by those in other developed countries, are characterized by a declining interest in materialism and an increased dedication to social purpose, vegetarianism and optimism. The article concludes, “Taken together these habits and tastes look less like narcissism than communalism. And its highest value isn’t self-promotion, but its opposite, empathy — and open-minded and -hearted connection to others.” This view supports the thesis of a book I’ve been reading, Twee, The Gentle Revolution in Music, Books, Television, Fashion and Film, by Mark Spitz.