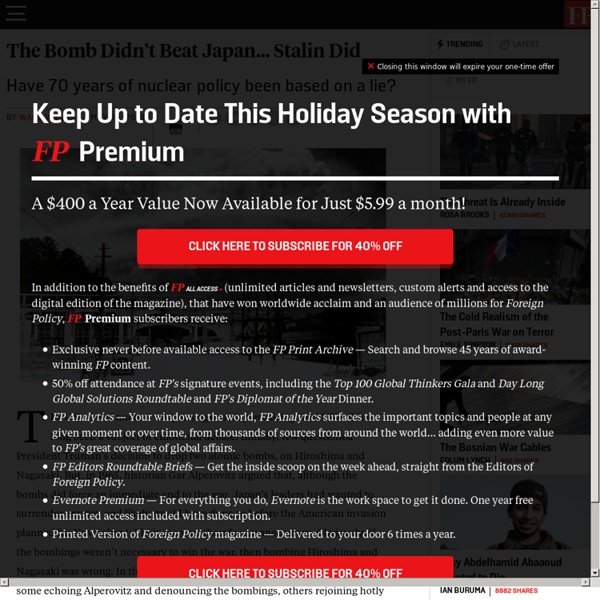 The U.S. use of nuclear weapons against Japan during World War II has long been a subject of emotional debate. Initially, few questioned President Truman’s decision to drop two atomic bombs, on Hiroshima and Nagasaki. But, in 1965, historian Gar Alperovitz argued that, although the bombs did force an immediate end to the war, Japan’s leaders had wanted to surrender anyway and likely would have done so before the American invasion planned for November 1. Their use was, therefore, unnecessary. Obviously, if the bombings weren’t necessary to win the war, then bombing Hiroshima and Nagasaki was wrong. In the 48 years since, many others have joined the fray: some echoing Alperovitz and denouncing the bombings, others rejoining hotly that the bombings were moral, necessary, and life-saving. Both schools of thought, however, assume that the bombing of Hiroshima and Nagasaki with new, more powerful weapons did coerce Japan into surrendering on August 9. Timing It could not have been Nagasaki.

Second Best in the World at the Tokyo Olympics, but Still Saying Sorry TOKYO — Kenichiro Fumita was crying so hard that he could barely get the words out. “I wanted to return my gratitude to the concerned people and volunteers who are running the Olympics during this difficult time,” Mr. Fumita, a Greco-Roman wrestler, said between sobs after finishing his final bout at the Games this week. “I ended up with this shameful result,” he said, bobbing his head abjectly.

Madison Saw Something in the Constitution We Should Open Our Eyes To As James Madison explains it in Federalist No. 43, it means that “In a confederacy founded on republican principles, and composed of republican members, the superintending government ought clearly to possess authority to defend the system against aristocratic or monarchial innovations.” He goes on: “The more intimate the nature of such a Union may be, the greater interest have the members in the political institutions of each other; and the greater right to insist that the forms of government under which the compact was entered into, should be substantially maintained.” Of course, there’s no real chance in the modern era that any state will become a “monarchy” or “aristocracy” in the 18th-century sense.

Civil rights in America: How 1961 changed the course of US history Walking a picket line, sitting at a lunch counter, asking for a book in a library: It could get them arrested, beaten or killed. They did it anyway. It was 1961, and across the South, college students, faith leaders, shop owners, high school students, civil rights leaders and many others risked their lives to battle white supremacy. Artist Crafts Delicate Sculptures With Hundreds of Tiny Paper Cranes Japanese artist Naoki Onogawa has been fascinated with the traditional art of origami since he was a child. Now, he incorporates the popular craft into his own artwork. Using nothing more than his hands, the artist folds hundreds of tiny origami cranes that are small enough to fit on the tip of his finger. Those minuscule paper creatures are then used as leaves on the delicate branches of his asymmetrical tree-like sculptures. Onogawa began creating paper cranes after witnessing the devastating effects of the Great East Japan Earthquake in 2011.

‘Yeah, we’re spooked’: AI starting to have big real-world impact, says expert A scientist who wrote a leading textbook on artificial intelligence has said experts are “spooked” by their own success in the field, comparing the advance of AI to the development of the atom bomb. Prof Stuart Russell, the founder of the Center for Human-Compatible Artificial Intelligence at the University of California, Berkeley, said most experts believed that machines more intelligent than humans would be developed this century, and he called for international treaties to regulate the development of the technology. “The AI community has not yet adjusted to the fact that we are now starting to have a really big impact in the real world,” he told the Guardian. “That simply wasn’t the case for most of the history of the field – we were just in the lab, developing things, trying to get stuff to work, mostly failing to get stuff to work. So the question of real-world impact was just not germane at all. And we have to grow up very quickly to catch up.”

Exclusive: Hong Kong public libraries purge 29 titles about the Tiananmen Massacre from the shelves - Hong Kong Free Press HKFP Hong Kong public libraries over the past 12 years have removed 29 out of 149 books about the Tiananmen Massacre from their shelves, a total of 263 individual copies, a review by HKFP has found. Of the 120 titles still stocked, just 26 are displayed on the shelves and immediately available for borrowing. The remaining 94 are only available on request, are stored in off-site book reserves, or are housed in reference sections where they can be read but not borrowed. In June 2009, the Home Affairs Bureau made public a spreadsheet of 149 titles about the 1989 June 4 massacre that were in Hong Kong’s public libraries at the time, with a total of 1,162 copies available for lending or reference.

This Adorable Japanese Couple Spend Every Day in Matching Outfits Whether it's an intentional decision or unexplainable couple telepathy, many loved-up duos dress to complement each other. Famous examples include David and Victoria Beckham’s matching leather look from 1999, and of course no one could forget Britney Spears and Justin Timberlake’s iconic double-denim red carpet moment in 2001. However, there’s one married couple in Japan who is currently stealing the show. Known as bonpon on Instagram (Mr. Bon and Mrs. Pon or Tsuyoshi and Tomi Seki), have been married for 41 years, and they show their deep love to the world by dressing in matching outfits.

How Do Bad Cops Stay in Power? Just Look at Miami. In 2009, the year that Ortiz arrested Vilma, Ortiz started to gain real political power when Miami FOP President Armando Aguilar tapped Ortiz to be the union’s vice president. At the time, the Great Recession was deepening. Tax collections plummeted. Labor costs didn’t. So, in August 2010, the city declared a “financial urgency” under state law and cut city workers’ pay, including that of police. From his union post, Ortiz rose up as the voice of the cop on the street as many officers felt under siege. A Brief History of Pickles Is there an alternate timeline where America is known as the United States of the Pickle-Dealer? It seems unlikely, but there’s an element of truth to this half-sour hypothetical. Amerigo Vespucci didn’t discover the Americas, contrary to what the map-makers who named the continents believed, but his given name did end up lending itself to the so-called “new world.” And Ralph Waldo Emerson once called Vespucci “the pickle-dealer at Seville,” a derisive label that may have stretched the truth a bit, but pointed towards a very real part of the itinerant Italian’s biography. Before traveling to the New World himself, Vespucci worked as a ship chandler—someone who sold supplies to seafaring merchants and explorers.

100-Year-Old Photos Capture Authentic Daily Life in Japan These rare shots of vintage Japan during 1908 are thanks to the acute artistic eye of Arnold Genthe. The German-born American scholar honed his photographic talent on the streets, spending his off-time roaming through his city with a partially hidden camera in attempts of recording memorable moments. This intriguing series was collected during a 6-month visit to Japan, during which Genthe managed to share his perspective of the vivid daily experiences of its local citizens. Born in Germany, Genthe pursued formal education in the field of philology before immigrating to San Francisco to work as a tutor. Facebook Is Bad. Fixing It Rashly Could Make It Much Worse. The nicest thing you can say about the Health Misinformation Act, proposed in July by the Democratic senators Amy Klobuchar and Ben Ray Luján, is that it means well. The internet has been a key accelerant of widespread myths, misunderstandings and lies related to Covid-19; Klobuchar and Luján’s bill would force online companies like Facebook to crack down on false information during public health emergencies, or lose immunity from lawsuits if they don’t. There’s only one problem: What is health misinformation? I know of no oracular source of truth about Covid-19. Scientific consensus has shifted dramatically during the pandemic, and even now experts are divided over important issues, such as whether everyone should get a vaccine booster shot.

Moving Photos Showing The Liberation Of Concentration Camps During WWII The Holocaust was a tragic and inhumane event during which an estimated 6 million Jews were killed for their ethnicity and religion. During the course of WWII, many camps were erected to house Jewish people in horrible conditions, mentally and physically torture them, and ultimately execute them in whatever way the Germans saw fit. While millions died directly at the hands of their oppressors, many passed simply because of malnourishment.

Zao Fox Village, a Sanctuary in Japan Where Foxes Roam Freely Located near the city Shiroishi in the mountains of Miyagi, Japan, the Zao Fox Village (Zao Kitsune Mura) is a paradise for fox lovers. Open since 1990, the village is a sanctuary for over a hundred animals, including six different breeds of foxes who roam freely. After paying a small admission fee, visitors can take a tour of a bunny petting zoo, horse stables, and an enclosed area where injured and young foxes are kept for their own safety. The main attraction, however, is the large, open preserve where foxes scamper, play, eat, and sleep.