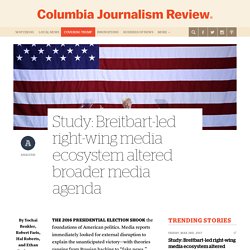 Media reports immediately looked for external disruption to explain the unanticipated victory—with theories ranging from Russian hacking to “fake news.” We have a less exotic, but perhaps more disconcerting explanation: Our own study of over 1.25 million stories published online between April 1, 2015 and Election Day shows that a right-wing media network anchored around Breitbart developed as a distinct and insulated media system, using social media as a backbone to transmit a hyper-partisan perspective to the world. 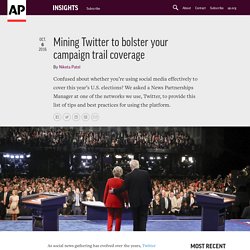 This year, we have seen an unprecedented use of Twitter by presidential candidates, the parties, their teams, newsrooms and journalists. As we head into the homestretch of this year’s election, many newsrooms and journalists are using Twitter to cover the debates and prepare for Election Day. Here are some #protips to experiment with to maximize the effectiveness of the platform: Notifications Turn on notifications for a candidate to see his or her tweets as they happen. And now anyone can toggle between receiving account notifications for all tweets from an account or just those containing live video, which news organizations have increasingly utilized. Direct Messaging Be reachable via DM to cultivate sources privately.

TweetDeck Streamline your Twitter experience with TweetDeck! Periscope Use this app to go live anytime, anywhere. Instant Articles: More Monetization Options, More Value. By Harshit Agarwal, Product Manager Creating value for publishers using Instant Articles is extremely important to us, and it is critical to our mission of delivering the best mobile reading experience for people on Facebook. 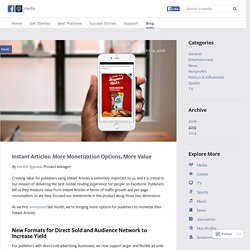 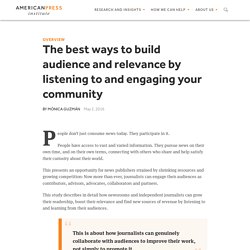 They participate in it. People have access to vast and varied information. They pursue news on their own time, and on their own terms, connecting with others who share and help satisfy their curiosity about their world. This presents an opportunity for news publishers strained by shrinking resources and growing competition: Now more than ever, journalists can engage their audiences as contributors, advisors, advocates, collaborators and partners. This study describes in detail how newsrooms and independent journalists can grow their readership, boost their relevance and find new sources of revenue by listening to and learning from their audiences. Viewsources Podcast. Nettavisen starter eget content marketing-byrå. Nettavisen har de siste årene satset tungt på å skape nye inntektskilder og rundt 40 prosent av omsetningen kommer fra nye forretningsområder. 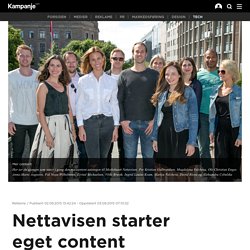 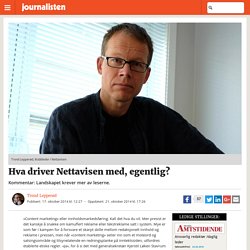 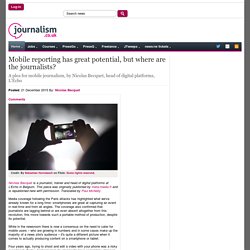 This piece was originally published by meta-media.fr and is republished here with permission. Translated by Paul McNally. Media coverage following the Paris attacks has highlighted what we've already known for a long time: smartphones are great at capturing an event in real-time and from all angles. The coverage also confirmed that journalists are lagging behind or are even absent altogether from this revolution, this move towards such a portable method of production, despite its potential. While in the newsroom there is now a consensus on the need to cater for mobile users – who are growing in numbers and in some cases make up the majority of a news site's audience – it's quite a different picture when it comes to actually producing content on a smartphone or tablet.

Four years ago, trying to shoot and edit a video with your phone was a risky experiment.