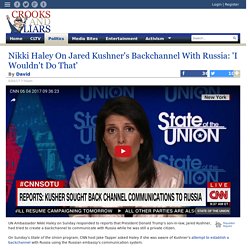 </a> UN Ambassador Nikki Haley on Sunday responded to reports that President Donald Trump's son-in-law, Jared Kushner, had tried to create a backchannel to communicate with Russia while he was still a private citizen. ‘It’s 11th century’: CNN’s Jake Tapper rips all-male Toby Keith concert in Saudi Arabia. Sarah Palin ducks Jake Tapper’s question of whether she was sexually harassed at Fox News. In an exclusive interview with CNN’s Jake Tapper, former Gov.

Sarah Palin (R-AK) revealed she believed that Russia was stealing oil from the United States and hinted that she might have experienced harassment at Fox News. In a Thursday interview, Palin explained that the reason she brought Kid Rock and Ted Nugent to dinner with President Donald Trump Wednesday night because “Jesus was booked.” When it came to Russia, Palin said that Americans should always be alarmed when we hear Russia is doing something off the coast of Alaska. CNN's Jake Tapper Flings Refugee Contradiction At Ivanka Trump's Pro-Strike Tweet.

Roger Stone panics over Russia investigators in letter to Jake Tapper: ‘I will spank them like children’ Roger Stone, a close friend and confidant to President Donald Trump, sent a letter to CNN host Jake Tapper to defend himself against allegations that he colluded with Russian operatives to damage Hillary Clinton’s campaign. 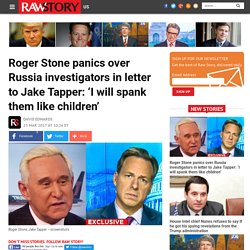 In a report on Wednesday, CNN revealed that the FBI had learned that associates of the president appeared to have coordinated with Russians during the 2016 campaign. And although the report did not explicitly accuse Stone of wrongdoing, Tapper said on Thursday that the Trump ally had sent CNN a letter to defend himself. Stone’s letter begins by accusing House Intelligence Committee ranking member Adam Schiff (D-CA) of running a “Kangaroo Court” and “engaging in demagoguery, red-baiting, fear mongering half truths and innuendo.” “Neither the president or I have anything to fear from a full and fair investigation of these bogus charges of Russian collusion,” Stone insists. 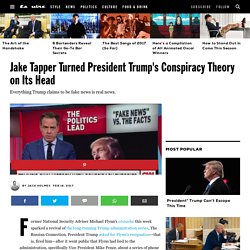 President Trump asked for Flynn's resignation—that is, fired him—after it went public that Flynn had lied to the administration, specifically Vice President Mike Pence, about a series of phone calls he made to the Russian ambassador. But while Press Secretary Sean Spicer cited a breakdown in trust between the president and Flynn, the president himself had another answer. ‘Arf arf’: CNN’s Jake Tapper taunts Trump’s ‘obedient attack dogs’ to come and get him after shredding Conway. 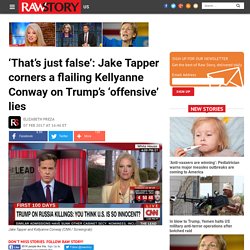 After discussing the moral equivalency the president drew between Russia and the United States, Tapper turned his attention to the president’s controversial attack on the media, which Trump continued Monday at MacDill Air Force Base in Florida. “[Terrorism] is not even being reported,” Trump said during that speech, arguing “in many cases the very, very dishonest press doesn’t want to report it” “They have their reasons and you understand that,” the president added.

“Saying that we don’t cover terrorism, that’s just false,” Tapper said. Jake Tapper Calls Out Kellyanne Conway In Fiery Exchange. I Dated Monica Lewinsky. Cover design by Jandos RothsteinYou tend not to spend too much time contemplating Tim Russert's innermost thoughts when you're 100 feet under water, breathing through a narrow tube, soaring past the ocean wall in slow motion, staring at 200-year-old sea tortoises, parrot fish, and coral that have no concern for love or career. 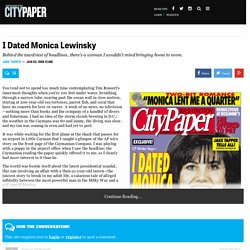 A week of no news, no television—nothing more than books and the company of a handful of divers and fisherman. I had no idea of the storm clouds brewing in D.C.; the weather in the Caymans was 80 and sunny, the diving was clear, and my tan was coming in even and had yet to peel. It was while waiting for the first plane at the shack that passes for an airport in Little Cayman that I caught a glimpse of the AP wire story on the front page of the Caymanian Compass. I was playing with a puppy in the airport office when I saw the headline; the Caymanian reading the paper quickly offered it to me, as I clearly had more interest in it than he. Monica Lewinsky. How CNN anchor Jake Tapper’s performative neutrality made him the ideal newsman for our age. 'Americans Are Terrified': Jake Tapper Makes Paul Ryan Answer for Wave Pro-Trump Hate Crimes.