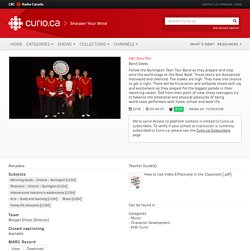 These teens are disciplined, motivated and talented. The stakes are high. They have one chance to get it right. 2018 00:45:01 9-12 Added on: 11/26/2018 We’re sorry! Metadata Subjects Marching bands -- Ontario -- Burlington [LCSH] Musicians -- Ontario -- Burlington [LCSH] Interpersonal relations in adolescence [LCSH] Arts -- Study and teaching [LCSH] Music [LCSH] Family life education [LCSH] Team Morgan Elliott (Director) Closed captioning Available MARC Record View Download Teacher Guide(s) How to Use Video Effectively in the Classroom [.pdf] Can be found in Categories About For over 20 years, the combined team of CBC Learning and Radio-Canada Contenus éducatifs have been offering educators access to Canada's premier educational programming Newsletter Subscribe to our newsletter and stay up to date with our latest releases! 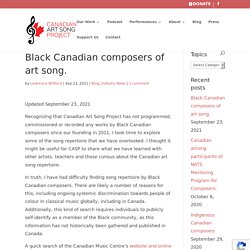 I thought it might be useful for CASP to share what we have learned with other artists, teachers and those curious about the Canadian art song repertoire. In truth, I have had difficulty finding song repertoire by Black Canadian composers. There are likely a number of reasons for this, including ongoing systemic discrimination towards people of colour in classical music globally, including in Canada. Additionally, this kind of search requires individuals to publicly self-identify as a member of the Black community, as this information has not historically been gathered and published in Canada. Civil War Music Instruments. Classical Symphony Explained. Compare and Contrast Example 1. Compare and Contrast Example 2. There are many similarities and differences in the structure and rhythms of the two ‘beautiful’ pieces: Think of Me from phantom of the Opera and Schubert’s The Lord is my Shepherd. 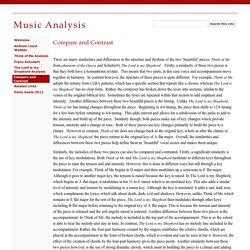 Firstly, a similarity of these two pieces is that they both have a homophonic texture. This means that two parts, in this case voice and accompaniment move together in harmony. In contrast however, the structure of these pieces is quite different. For example, Think of Me adopts the ternary form (ABA pattern), which has a specific section that repeats like a chorus, whereas The Lord is my Shepherd has no clear form. 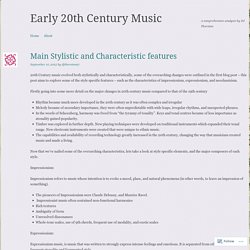 Firstly going into some more detail on the major changes in 20th century music compared to that of the 19th century Rhythm became much more developed in the 20th century as it was often complex and irregularMelody became of secondary importance, they were often unpredictable with wide leaps, irregular rhythms, and unexpected phrases.In the words of Schoenberg, harmony was freed from “the tyranny of tonality”.

Keys and tonal centres became of less importance as atonality gained popularity.Timbre was explored in further depth. New playing techniques were developed on traditional instruments which expanded their tonal range. Impressionism: French Military Music. Go Behind the Scenes of Moana (2016) How Music Producers Work. The manager shopped his rock group's demo tape to three record labels and was turned down by all three. 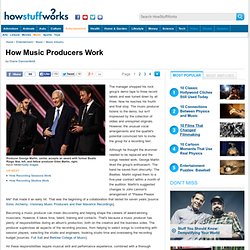 Now he reaches his fourth and final stop. The music producer listens to the demo, but isn't impressed by the collection of oldies and uninspired originals. However, the unusual vocal arrangements and the quartet's potential convinced him to invite the group for a recording test. Although he thought the drummer needed to be replaced and the songs needed work, George Martin liked the group's enthusiasm. How Music Saved Venezuela's Children. How to Enjoy a Live Concert. Hearing live music is one of the most pleasurable experiences available to human beings. 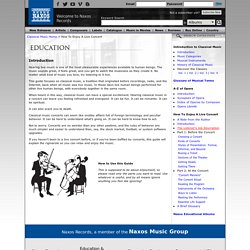 The music sounds great, it feels great, and you get to watch the musicians as they create it. No matter what kind of music you love, try listening to it live. This guide focuses on classical music, a tradition that originated before recordings, radio, and the Internet, back when all music was live music. In those days live human beings performed for other live human beings, with everybody together in the same room. When heard in this way, classical music can have a special excitement. It can also scare you to death. "In China" (6) Indigenous Canadian composers. In the fall of 2019 Canadian Art Song Project released our podcast discussion with composer Ian Cusson and mezzo-soprano Marion Newman about the appropriation of First Nations, Inuit and Métis songs and stories in Canadian art song and chamber music. 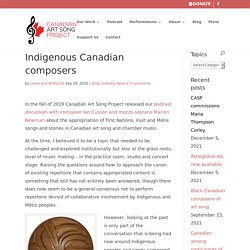 At the time, I believed it to be a topic that needed to be challenged and explored institutionally but also at the grass roots level of music making – in the practice room, studio and concert stage. Raising the questions around how to approach the canon of existing repertoire that contains appropriated content is something that still has not entirely been answered, though there does now seem to be a general consensus not to perform repertoire devoid of collaborative involvement by Indigenous and Métis peoples. The medallion at the centre of Carey Newman’s acoustic cloud sculpture hanging in The Baumann Centre for Pacific Opera Victoria.

His stylized frogs represent music, magic and continual change. Photograph by Bruce Stotesbury. T. Inuit Throat Singing. Lord Of The Rings: How Music Elevates Story. Music Genre List. Music Melody from Instruments of different countries!! Musical Hypnosis: Sound and Selfhood from Mesmerism to Brainwashing. We use cookies to enhance your experience on our website.By continuing to use our website, you are agreeing to our use of cookies. 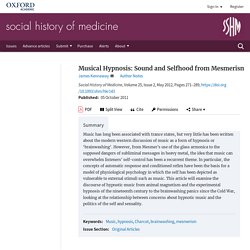 You can change your cookie settings at any time. <a href=" Find out more</a> Skip to Main Content Sign In Register Close Advanced Search Article Navigation Volume 25 Issue 2 May 2012. Musician Biography. National Jazz Workshop Big Band. Newsies. Oldest Military Band. Oliver! Soundtrack Lyrics. On This Day in Classical Music History. Once in a Lullaby (5) Once in a Lullaby Live Performance (5) PS22 Chorus "SOMEWHERE OVER THE RAINBOW" Orchestra Kids (4) Perfect Pitch Demonstration. Saving Our Sounds: Preserving Historical Recordings and Music (Documentary) Sound Design - Star Wars Episode II (FULL) Sound of Cinema Part 1: The Big Score. Sound of Cinema Part 2: Pop Goes the Soundtrack. Sound of Cinema Part 3: New Frontiers. That Higher Level (8) The Art of Listening To Music. The Beatles Bible. The Method behind the Music. The Military Band of the PLA (6) The Music of the Lord of the Rings (8)

The Power of Music (7) The Relation between Intelligence and Music. To the Origins of Music. What a Conductor Actually Does on Stage? What Does a Conductor Do? Yamaha GOING SOLO +Plus One.