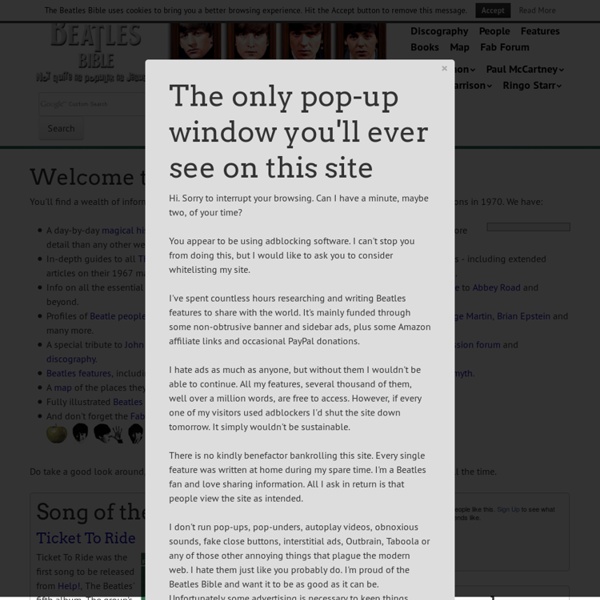 How Music Producers Work The manager shopped his rock group's demo tape to three record labels and was turned down by all three. Now he reaches his fourth and final stop. The music producer listens to the demo, but isn't impressed by the collection of oldies and uninspired originals. Online Drum Machine Drumbot is the next best thing to a real drummer. Full song loops and tons of grooves. Designed specifically for non-drummers for use as backing tracks during song composition. How to Enjoy a Live Concert Hearing live music is one of the most pleasurable experiences available to human beings. The music sounds great, it feels great, and you get to watch the musicians as they create it. No matter what kind of music you love, try listening to it live. This guide focuses on classical music, a tradition that originated before recordings, radio, and the Internet, back when all music was live music. In those days live human beings performed for other live human beings, with everybody together in the same room. When heard in this way, classical music can have a special excitement.

How to easily convert any music to 432hz and why A frequency is the number of movements up and down per second, called hertz. Energy is the ability to move, it is what fuels the movement up and down. 432hz tuning simply means that the note A in the middle of the musical scale will vibrate at 432hz, then all other notes along the scale are tuned accordingly. All octaves of the A note will be doubles or halves of that 432hz frequency (27, 54, 108, 216, 432, 864, etc) Here are various cosmic measurements, where we find the exact same numbers : Saturn polar diameter : 108,000 km Lester Bangs on "Astral Weeks" from "Stranded" (1979) Van Morrison's Astral Weeks was released ten years, almost to the day, before this was written. It was particularly important to me because the fall of 1968 was such a terrible time: I was a physical and mental wreck, nerves shredded and ghosts and spiders looming and squatting across the mind. My social contacts had dwindled to almost none; the presence of other people made me nervous and paranoid. I spent endless days and nights sunk in an armchair in my bedroom, reading magazines, watching TV, listening to records, staring into space. I had no idea how to improve the situation and probably wouldn't have done anything about it if I had.

Early 20th Century Music 20th Century music evolved both stylistically and characteristically, some of the overarching changes were outlined in the first blog post – this post aims to explore some of the style specific features – such as the characteristics of impressionism, expressionism, and neoclassicism. Firstly going into some more detail on the major changes in 20th century music compared to that of the 19th century Rhythm became much more developed in the 20th century as it was often complex and irregularMelody became of secondary importance, they were often unpredictable with wide leaps, irregular rhythms, and unexpected phrases.In the words of Schoenberg, harmony was freed from “the tyranny of tonality”. Keys and tonal centres became of less importance as atonality gained popularity.Timbre was explored in further depth. New playing techniques were developed on traditional instruments which expanded their tonal range. Impressionism:

Compare and Contrast Example 2 There are many similarities and differences in the structure and rhythms of the two ‘beautiful’ pieces: Think of Me from phantom of the Opera and Schubert’s The Lord is my Shepherd. Firstly, a similarity of these two pieces is that they both have a homophonic texture. This means that two parts, in this case voice and accompaniment move together in harmony. In contrast however, the structure of these pieces is quite different. This is the Coolest Sounding Instrument You Will Hear Today Musician Marc Chouarain gives a brief demonstration and overview of a fascinating instrument called a Cristal Baschet, which he uses when composing music for film soundtracks. The contemporary musical instrument was developed in 1952 by the brothers Bernard and François Baschet. Metal rods are embedded in a heavy plate to form the elements.

Power Lunch with social critic Lydia Lunch She was a complicated, poetry-writing teenager obsessed with rock concerts and the works of Henry Miller and the Marquis de Sade, yet she makes her escape sound deceptively easy. “I snuck out of my bedroom window and jumped on a Greyhound, and that was it. If you can’t stand the situation you’re in, find a better one. If you can’t stand your family, find a better one.” Nearly four decades later, that Greyhound had taken her to a lot of places. Geographically, creatively, politically. Band Geeks (7) Advanced search CBC Docs POV Band Geeks Follow the Burlington Teen Tour Band as they prepare and step onto the world stage at the Rose Bowl.