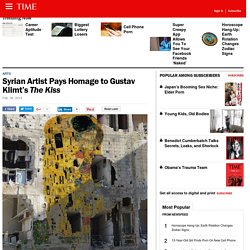 Tammam Azzam is represented by Ayyam Gallery. According to the United Nations, more than 60,000 people have been killed so far inSyria’s devastating civil war. The thousands of photographs that have come out of this conflict are a powerful visual record of the violence being committed. And now, one digitally-manipulated image by a Syrian artist is capturing the Internet’s imagination. (PHOTOS: Syria’s Agony: The Photographs That Moved Them Most) Tammam Azzam, a Syrian-born artist who lives and works in Dubai, digitally superimposed Gustav Klimt’s The Kiss on a photograph of a bullet-ridden wall in an unidentified part of Syria. (MORE: Chaos and Killing in Syria: Photos of a Slow-Motion Civil War) Freedom Graffiti is part of a larger body of work Azzam produced in response to his country’s struggle, titled ‘Syrian Museum’.

Instagram. ISRAEL vs. THE WORLD. UCLA: Jerusalem: The Holy City (Spring 2010): A History of Jerusalem from Ancient Canaan to Modern Israel - Audio - ingyenes podcast az iTunesban. Wrestling Jerusalem. 10 awe-inspiring places around the world. 10 dramatic landscapes. European Identities Part I. I’m reproducing the transcript of parts of a talk I gave in Geneva last November at the Latsis Foundation Prize Ceremony on “European Identities.” 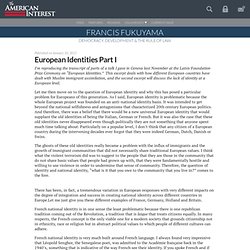 This excerpt deals with how different European countries have dealt with Muslim immigrant assimilation, and the second excerpt will discuss the lack of identity at a European level. Let me then move on to the question of European identity and why this has posed a particular problem for Europeans of this generation. As I said, European identity is problematic because the whole European project was founded on an anti-national identity basis. It was intended to get beyond the national selfishness and antagonisms that characterized 20th century European politics. And therefore, there was a belief that there would be a new universal European identity that would supplant the old identities of being the Italian, German or French. French national identity is very much built around French language. The German case is very different.

IfItWereMyHome.com. M.ceip.org. Twenty years ago this week, the worst episode of the Armenian-Azerbaijani conflict over Nagorny Karabakh occurred near the small town of Khojali. On the bitterly cold morning of February 26, 1992, more than 400 Azerbaijanis fleeing the town were killed by Armenian soldiers or paramilitary fighters. The victims included military personnel but the great majority of them were civilians.

The killings were documented in detail by journalists at the time and later by the human rights organizations Human Rights Watch and Memorial. For Azerbaijanis, the Khojali killings have become a touchstone for their losses in the Karabakh conflict. As the symbol of a national tragedy, they are marked with even greater ceremony each year, although some of these commemorations seem inappropriate to an outsider, such as when schoolchildren are shown pictures of dead bodies. Needless to say, for the Armenian side, this is a difficult topic. I have been personally caught up in the Khojali story. Most amazing places I want to visit. Nagorno Karabakh and Kosovo: Azerbaijani Impostors in Search of Western Aid. "For Azerbaijan the issue of Karabakh is a matter of ambition, for the Armenians of Karabakh it is a matter of life or death …" (Academician Andrei Sakharov, Soviet human rights activist and Nobel Prize laureate) "Our airplanes bombed Stepanakert every day for over 100 days in a row, but Armenians refused to vacate their houses ... 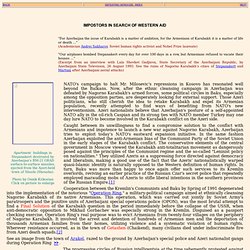 " (Excerpt from an interview with Lala Shovket Gadjieva, State Secretary of the Azerbaijani Republic, by Azerbaijani State Television, 26 August 1993. See the ruins of Nagorno Karabakh's cities of Stepanakert and Martuni after Azerbaijani aerial attacks) NATO's campaign to halt Mr. Caught between its unwillingness to find a compromise solution to the conflict with Armenians and impotence to launch a new war against Nagorno Karabakh, Azerbaijan tries to exploit today’s NATO's eastward expansion initiative. Operation Ring >> . The United States, on their part, are too concerned with Azerbaijan's involvement in the Middle East's terrorist games. "... Politics, Business, Technology, and the Arts.