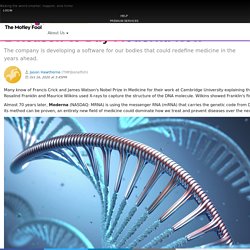 They were not the only researchers involved. At nearby King's College, Rosalind Franklin and Maurice Wilkins used X-rays to capture the structure of the DNA molecule. Wilkins showed Franklin's findings to Watson without her knowledge, and the rest is history. Almost 70 years later, Moderna (NASDAQ: MRNA) is using the messenger RNA (mRNA) that carries the genetic code from DNA into the cell to create a vaccine for a global pandemic.

There is more to the company than the COVID-19 vaccine, and if its method can be proven, an entirely new field of medicine could dominate how we treat and prevent diseases over the next 70 years. Image source: Getty Images. The company compares mRNA to software for the cell, claiming that if it works for one disease, it may work for many more. Where Will Moderna Be in 10 Years? Could Moderna Be a Millionaire-Maker Stock? The 2020 news cycle has been dominated by the coronavirus -- and understandably so. 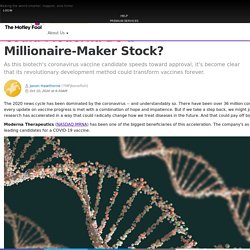 There have been over 36 million confirmed cases and 1 million deaths related to the virus worldwide. Economic and health effects are tracked day by day, and every update on vaccine progress is met with a combination of hope and impatience. But if we take a step back, we might just realize that there is a silver lining to the massive disruption experienced during this most extraordinary year. Medical research has accelerated in a way that could radically change how we treat diseases in the future.

And that could pay off big for healthcare investors as years of advances are pushed forward in an attempt to end the pandemic. Report: Moderna and Pfizer Vaccine Trial Participants Report Serious Side Effects. Three patients taking part in clinical trials for Moderna's (NASDAQ:MRNA) coronavirus vaccine candidate and two taking part in Pfizer's (NYSE:PFE) study have experienced intense side effects, according to a report published by CNBC. 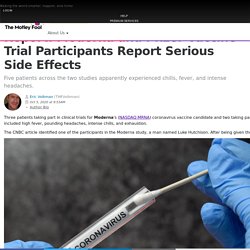 Those effects included high fever, pounding headaches, intense chills, and exhaustion. The CNBC article identified one of the participants in the Moderna study, a man named Luke Hutchison. After being given the second of two COVID-19 vaccine shots during the trial, he said he awoke late at night with chills and a fever. Image source: Getty Images. CNBC did not reveal the identities of the four other patients, who asked to remain anonymous, but the news network did say it had verified their participation in the studies through trial documentation. On a more positive note, all three Moderna trial participants and one in the Pfizer trial reported that their side effects, while intense, melted away after at most one day. Trump Administration collaborates with Moderna to produce 100 million doses of COVID-19 investigational vaccine.

He had a severe reaction to Moderna Covid-19 vaccine. He's still a believer. Patients in clinical trials are usually faceless. 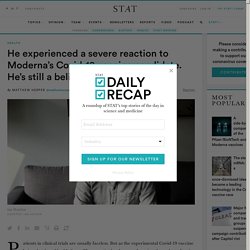 But as the experimental Covid-19 vaccine being developed by Moderna Therapeutics has begun advancing through studies, it has found a much more visible advocate: trial volunteer Ian Haydon, a 29-year-old in Seattle. Haydon has spoken about the vaccine on CNN and CNBC. He even said he’d volunteer to be exposed to the novel coronavirus, SARS-CoV-2, if researchers want to test to see if the vaccine was actually effective. But up until now he has left out a key detail: He is, apparently, one of three people in the trial who had a systemic adverse reaction to the vaccine.

Twelve hours after receiving his second dose, he developed a fever of more than 103 degrees, sought medical attention, and, after being released from an urgent care facility, fainted in his home. Advertisement He has not brought up the side effects previously, he said, out of “an abundance of caution.” He went to the trial site for a physical, and signed a 20-page consent form.

Moderna’s Work on a COVID-19 Vaccine Candidate. 1 Any emergency use would be subject to authorization by the appropriate regulatory agencies, based on the emergence of clinical data for mRNA-1273 that would support use of the vaccine prior to licensure.2 As has previously been disclosed, the ability of the Company to make millions of doses per month is contingent on investments in the scale up and further buildout of the Company’s existing manufacturing infrastructure. 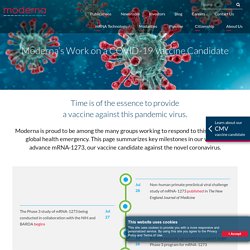 Forward Looking Statements This press release contains forward-looking statements within the meaning of the Private Securities Litigation Reform Act of 1995, as amended, including regarding the Company’s development of a potential vaccine against the novel Coronavirus, the conduct and timing of the Phase I study of mRNA-1273, the planning, conduct and timing of a potential Phase 2 and any subsequent trials of mRNA-1273, and potential manufacturing capabilities.

Moderna’s Phase I Covid-19 mRNA vaccine has manufacturing edge but many obstacles to confirm protection lay ahead - Clinical Trials Arena. By Reynald Castaneda in London. 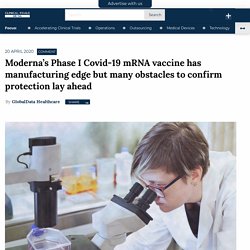 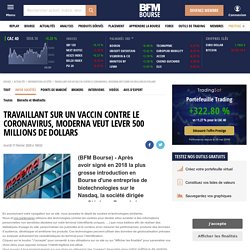 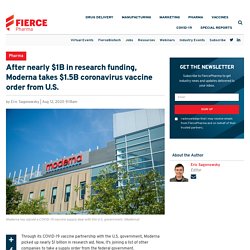 Now, it's joining a list of other companies to take a supply order from the federal government. Under a deal worth up to $1.525 billion, Moderna agreed to deliver 100 million doses of its mRNA vaccine candidate if it succeeds in late-stage testing. The deal doesn’t stipulate a timeline for vaccine shipments, at least publicly, but does include “incentive payments for timely delivery,” Moderna says.

The pact also includes an option for another 400 million doses. Combined, Moderna has scored $2.48 billion in R&D and supply funding from the U.S. government for its program. Still, Moderna's price is higher than any other Operation Warp Speed deal so far—despite the fact that it has received the most funding support. At $1 billion for 100 million doses, Johnson & Johnson’s Operation Warp Speed deal—plus $456 million in R&D funding—comes out to about $14.56 per dose, total.