Startups. Enhance your data presentation skills with Microsoft Excel Training - 11 Signs Your IT Project is Doomed CIO. 2 Ways to Build a Motivated Team (On the Cheap) 8 Surefire Ways to Demotivate Your Employees. Ever notice how a new employee’s enthusiasm eventually wears off? 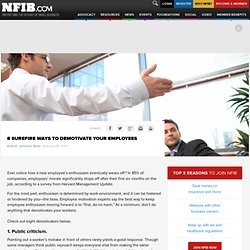 In 85% of companies, employees’ morale significantly drops off after their first six months on the job, according to a survey from Harvard Management Update. For the most part, enthusiasm is determined by work environment, and it can be fostered or hindered by you—the boss. Employee motivation experts say the best way to keep employee enthusiasm moving forward is to “first, do no harm.” At a minimum, don’t do anything that demotivates your workers. Check out eight demotivators below. 1. Pointing out a worker’s mistake in front of others rarely yields a good response. 2. If employees feel like their hard work goes unnoticed, they’ll start to wonder why they’re working so hard in the first place. 3.

Have you ever solicited ideas, asked what employees think about a policy, or asked your team to draft a proposal?

Sp2. 1 in 2 new graduates are jobless or underemployed. WASHINGTON (AP) — The college class of 2012 is in for a rude welcome to the world of work. 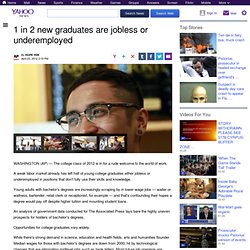 A weak labor market already has left half of young college graduates either jobless or underemployed in positions that don't fully use their skills and knowledge. Young adults with bachelor's degrees are increasingly scraping by in lower-wage jobs — waiter or waitress, bartender, retail clerk or receptionist, for example — and that's confounding their hopes a degree would pay off despite higher tuition and mounting student loans.

An analysis of government data conducted for The Associated Press lays bare the highly uneven prospects for holders of bachelor's degrees. Opportunities for college graduates vary widely. While there's strong demand in science, education and health fields, arts and humanities flounder. View gallery In this photo taken Thursday, April 19, 2012, Kelman Edwards Jr., working out at an apartment comple … His situation highlights a widening but little-discussed labor problem. Patent Absurdity — How software patents broke the system. Laziness & productivity. Here are some Tories: Once they enter the workplace, the British are among the worst idlers in the world...We work among the lowest hours, we retire early and our productivity is poor.

This is silly. We must not equate being idle in the sense of putting in few hours with being idle in the sense of having low productivity in those hours we do work. They are not just different things, but opposed things. Let's look at the facts.UK workers do indeed put in fewer hours than most. But it's not the case that our productivity - in terms of output per hour - is poor.In fact, it's above the OECD average. Stuart Aken: ‘Work Hard And You’ll Succeed’; The Biggest Lie?

Almost from infancy, we’re brought up to believe this mantra. 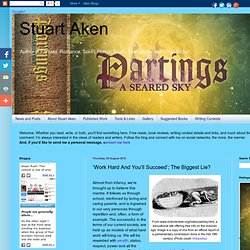 It follows us through school, reinforced by loving and caring parents, and is ingrained in our very personas through repetition and, often, a form of example. The successful, in the terms of our current society, are held up as models of what hard work will bring us. Jeff Bezos: The Smart People Change Their Minds. Amazon.com Founder and CEO Jeff Bezos stopped by the 37signals office yesterday and offered some wise thoughts about strategy. 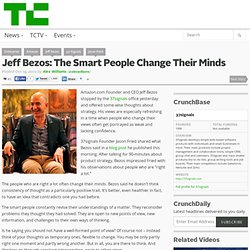 His views are especially refreshing in a time when people who change their views often get portrayed as weak and lacking confidence. 37signals Founder Jason Fried shared what Bezos said in a blog post he published this morning. After talking for 90-minutes about product strategy, Bezos impressed Fried with his observations about people who are “right a lot.” The people who are right a lot often change their minds. Bezos said he doesn’t think consistency of thought as a particularly positive trait. The smart people constantly revise their understandings of a matter.

Is he saying you should not have a well-formed point of view? The ones who are wrong — well, they too often get lost in the details that just support one point of view, Bezos said.

On Business Madness. I am not intentionally a business person. 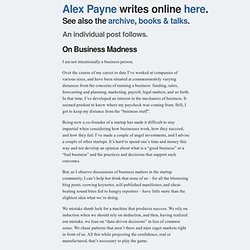 Over the course of my career to date I’ve worked at companies of various sizes, and have been situated at commensurately varying distances from the concerns of running a business: funding, sales, forecasting and planning, marketing, payroll, legal matters, and so forth. Management Secrets: Core Beliefs of Great Bosses. A few years back, I interviewed some of the most successful CEOs in the world in order to discover their management secrets. 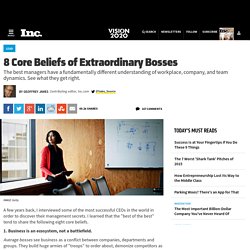 I learned that the "best of the best" tend to share the following eight core beliefs. 1. Business is an ecosystem, not a battlefield. Average bosses see business as a conflict between companies, departments and groups. They build huge armies of "troops" to order about, demonize competitors as "enemies," and treat customers as "territory" to be conquered. The Art of Complex Problem Solving.