The 4 Weapons Of Exceptional Creative Leaders 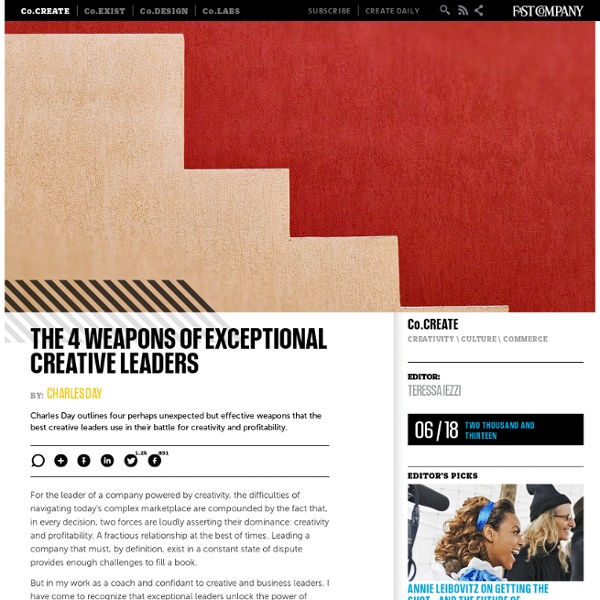 For the leader of a company powered by creativity, the difficulties of navigating today’s complex marketplace are compounded by the fact that, in every decision, two forces are loudly asserting their dominance: creativity and profitability. A fractious relationship at the best of times. Leading a company that must, by definition, exist in a constant state of dispute provides enough challenges to fill a book. But in my work as a coach and confidant to creative and business leaders, I have come to recognize that exceptional leaders unlock the power of "profitable creativity" by developing four benevolent weapons. Context Context is the most underappreciated asset of business leadership because without it, every decision becomes a guess. Many creative companies know what they do, but not where they’re trying to get to. The Power of Context Context gives us the ability to say no with confidence. Great leaders are not necessarily braver leaders. Creating Context When Maintaining Context Trust

The Rise of Compassionate Management (Finally) - Bronwyn Fryer by Bronwyn Fryer | 8:00 AM September 18, 2013 Don’t look now, but all of a sudden the topic of compassionate management is becoming trendy. A growing number of business conferences are focusing in on the topic of compassion at work. 3 Ways to Better Manage Boomers and Millennials and Ensure Mentoring As more and more Millennials graduate and enter the workforce – while Boomers begin to retire – HR professionals and employers seek to understand how to effectively manage both generations while ensuring a smooth knowledge transition. But with generational stereotypes, a modern workplace and a potential skills gap, effective management and mentorship can be a challenge. Craig Malloy, Cofounder and CEO of Lifesize Communications, recently guest wrote for Forbes and discussed the challenges and opportunities that come with managing Millennials and Boomers in the workplace. Three stand-out pieces of advice closely relate to Millennial findings that ConnectEDU and Achievers found in their recent study, Class of 2014.

3 Creative Lessons From The Amateurs, Rebels, And Dreamers Of Outsider Subcultures Some of the titular outsiders featured in Alissa Quart’s new book, Republic of Outsiders: The Power of Amateurs, Dreamers and Rebels, are crazy. That’s not a judgment; it’s a self-description: Among her diverse range of nonconforming subjects, Quart explores the “Mad Pride” movement, a group of people who reject the notion that their mental illnesses are disabilities. Some of them reject psychiatric medication, and others call their bipolar disorder or schizophrenia “dangerous gifts” instead of illnesses. The Plus Side of Pissing People Off Tim Ferriss, author of The 4-Hour Work Week Right alongside the cash and credit cards, I keep a number of strange things in my wallet. The largest is a folded-up page from the July 6, 2009, issue of Fortune magazine. In a profile, Scott Boras, widely regarded as the most powerful agent in professional baseball, describes a dinner with one of his mentors after a record-breaking contract:

"Culturematics" A Culturematic is a small machine for making culture. We use them to create new messages, new memes, new products, new services. We fire our Culturematic into the deep space of an inscrutable future and wait to see. Most will keep going. But some will phone home. Ah, we say, there’s something out there. Blog Editorial Submission :: Gabi de la Merced Post by James This week’s Editorial Submission pick is Gabi de la Merced. Born in Madrid, Spain she’s an animation student at the ECAM, and has been working since 2000 as an illustrator and freelance designer, mostly in advertising. What The Most Successful People Do Before Breakfast Mornings are a great time for getting things done. You’re less likely to be interrupted than you are later in the day. Your supply of willpower is fresh after a good night’s sleep. That makes it possible to turn personal priorities like exercise or strategic thinking into reality. But if you’ve got big goals—and a chaotic a.m. schedule—how can you make over your mornings to make these goals happen?

What Makes a Leader? It was Daniel Goleman who first brought the term “emotional intelligence” to a wide audience with his 1995 book of that name, and it was Goleman who first applied the concept to business with his 1998 HBR article, reprinted here. In his research at nearly 200 large, global companies, Goleman found that while the qualities traditionally associated with leadership—such as intelligence, toughness, determination, and vision—are required for success, they are insufficient. Truly effective leaders are also distinguished by a high degree of emotional intelligence, which includes self-awareness, self-regulation, motivation, empathy, and social skill. These qualities may sound “soft” and unbusinesslike, but Goleman found direct ties between emotional intelligence and measurable business results.

We must stay out of our cognitive box to innovate The influence of a few in many The assessment of the potential of a person should not be done without defining in what context his potential will be put to the test. I can be introverted or extroverted, I can be an expert or a leader, but of course, in a society more open and culturally diverse, potential can be called into question at any time. COOL SHIT'S BULLSHIT Dog Blood - Chella Ride by GOLDENWOLF Proud to have worked on this crazy space dog music video for Skrillex and Boysnoize aka Dogblood…