Evaluating Equity: A Framework for Understanding Action and Inaction on Social Justice Issues - V. Darleen Opfer, 2006. Watch These 7 Films Directed By Black Women. Students on the margins - Learning Forward. My friend and mentor Don Deshler has directed more than 200 studies in his career and, in the process, significantly shaped how we understand and respond to students who are at risk for failure. 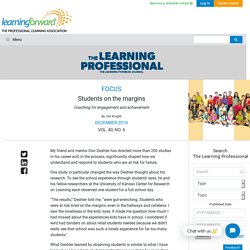 One study in particular changed the way Deshler thought about his research. To see the school experience through students’ eyes, he and his fellow researchers at the University of Kansas Center for Research on Learning each observed one student for a full school day. “The results,” Deshler told me, “were gut-wrenching. Students who were at risk lived on the margins, even in the hallways and cafeteria. I saw the loneliness in the kids’ eyes. What Deshler learned by observing students is similar to what I have learned as I have been studying instructional coaching for more than 20 years. Coaching needs to address student engagement as well as achievement.

An Adult’s Guide to Social Skills, for Those Who Were Never Taught. It would be great if everyone was polite and let you finish or paused to ask what you’re thinking. 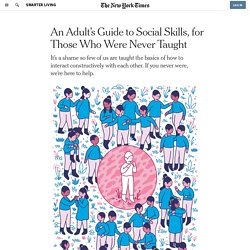 This doesn’t always happen. If someone interrupts you and you become annoyed, that can kill your motivation to speak up again. Mo Willems on the Lost Art of Being Silly. When I taught second grade, I had a student who absolutely hated reading. 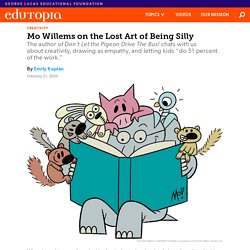 He’d made the decision that it was simply too boring. While his peers were busy devouring books, he’d spend his time distracting them, being silly, finding other things to occupy his time. That changed when we started reading Mo Willems’s We Are in a Book! I voiced the part of the elephant, Gerald, and he took the part of the pig, Piggie—good pals who come to realize that they are, in fact, in a book, and have the hilarity-provoking power to control what the readers say. 27 Must-Read Books By Latinx Authors. To the Daughters Who Let Go of Their Toxic Mothers - PuckerMom.com. 8 Ways to Work Smarter in 2020. Welcome to the Smarter Living newsletter! 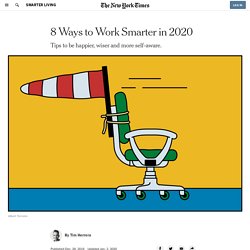 Every Monday, editor Tim Herrera emails readers with tips and advice for living a better, more fulfilling life. Middle Grade Fantasy Fiction Titles that Feature Characters of Color. My oldest is a voracious reader and consumer of content, so if it looks vaguely interesting, she reads it from cover to cover no matter how many pages are in between. 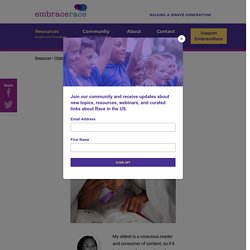 My youngest is a different story. He was a much more reluctant reader, but just like his phase of eating only blueberries and soy milk (yes, that was a thing) now that he has realized how much he likes fantasy adventures, he won’t read anything but. With a few highly notable exceptions, fantasy has been overwhelmingly focused on white characters. Books by Latino Authors to Add to Your 2020 Reading List. A new year is here, and with it comes the promise of a fresh crop of fantastic books by Latino authors for you to read. 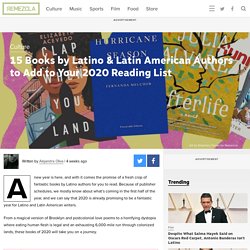 Because of publisher schedules, we mostly know about what’s coming in the first half of the year, and we can say that 2020 is already promising to be a fantastic year for Latino and Latin American writers. From a magical version of Brooklyn and postcolonial love poems to a horrifying dystopia where eating human flesh is legal and an exhausting 6,000-mile run through colonized lands, these books of 2020 will take you on a journey. "Shadowshaper: Legacy" by Daniel José Older (JANUARY) Shadowshaper Legacy by Daniel José Older. No White Saviors: Kids Books About Black Women in US History - Books For Littles. [Image Description: Feature of an illustrated portrait of Alma Woodsey Thomas from an inner page of ‘Little Leaders: Bold Women In Black History,’ by Vashti Harrison] In this post: Pictures books to inspire young history buffs – Stories of Black Women in American history. 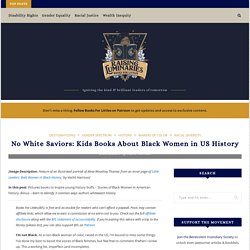 Bonus – learn to identify 3 common ways authors whitewash history. Books For Littles(BFL) is free and accessible for readers who can’t afford a paywall. Posts may contain affiliate links, which allow me to earn a commission at no extra cost to you. Check out the full affiliate disclosure along with the BFL statement of accountability. I’m not Black. Sparking Curious Kids. How Culturally Responsive Lessons Teach Critical Thinking. Aii study latinos in film 2019. Jennifer Lopez's Oscar Snub Was a Snub for Latinas.

But the hints are there — her last name is Vega, and the actress Emma Batiz, who plays her daughter in the film, is also Latinx. 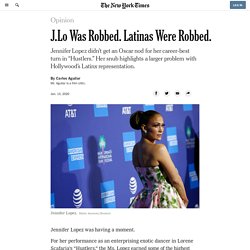 And of course and above all, it’s J.Lo in a role she was meant to play, a role that shows off her strengths, while allowing her to become the force of nature she hasn’t always seen herself as. “I’ve always been so much a romantic, so much about having a relationship, and this woman is the total opposite,” she told A.O. Scott in an interview for The New York Times Magazine.