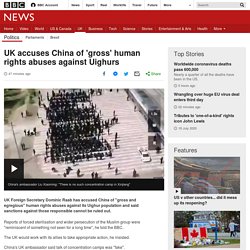 Reports of forced sterilisation and wider persecution of the Muslim group were "reminiscent of something not seen for a long time", he told the BBC. The UK would work with its allies to take appropriate action, he insisted. China's UK ambassador said talk of concentration camps was "fake". Liu Xiaoming told the BBC's Andrew Marr that the Uighurs received the same treatment under the law as other ethnic groups in his country. Jimmy Lai, Hong Kong Media Baron, Is Arrested Over Role in Protests. HONG KONG — A Hong Kong media tycoon known for his ardent opposition to China was arrested on Friday over his role in a pro-democracy protest last year, the police said, dealing another blow to the city’s independent media. 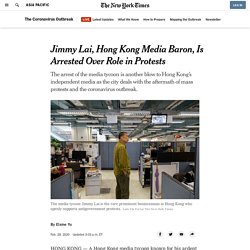 The tycoon, Jimmy Lai, a rare figure among Hong Kong’s elite for his willingness to take on Beijing, owns Next Media Group, which publishes a popular pro-democracy newspaper and website called Apple Daily. Xi Jinping has buried the truth about coronavirus. Over the past 70 years, the Chinese Communist party has subjected its country to a succession of manmade catastrophes, from the Great Famine, the Cultural Revolution and the Tiananmen Square massacre, to the forceful suppression of rights in Hong Kong and Tibet, and the mass internment of Uighurs in Xinjiang. 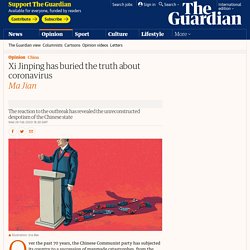 Official coverups and corruption have multiplied the death toll of natural calamities, from the Sars virus to the Sichuan earthquake. Xi Jinping’s mishandling of the coronavirus epidemic must now be added to the party’s shameful list of crimes. With serious outbreaks occurring in Japan, South Korea, Iran and Italy, it is clear that the virus of Xi’s totalitarian rule threatens the health and freedoms not only of the Chinese people, but of all of us everywhere. Xi’s vacuous, self-aggrandising ideological vision lies at the heart of this global crisis. Lulu Wang (filmmaker) Chinese zodiac. The Shēngxiào, literally "birth likeness"), also known in English as the Chinese zodiac ("zodiac" derives from the similar concept in Western Astrology and means "circle of animals"), is a scheme and systematic plan of future action, that relates each year to an animal and its reputed attributes, according to a 12-year cycle. 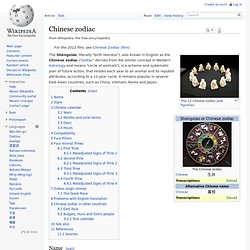 It remains popular in several East Asian countries, such as China, Vietnam, Korea and Japan. Name[edit] Identifying this scheme using the term "zodiac" reflects several similarities to the Western zodiac: both have time cycles divided into 12 parts, each labels at least the majority of those parts with names of animals, and each is widely associated with a culture of attributing influence of a person's relationship to the cycle upon their personality and/or events in their life. Nevertheless, there are major differences: the "Chinese" 12-part cycle corresponds to years rather than months. Signs[edit] The Crash and Burn of Dolce & Gabbana.

Yesterday, Xiang Kai, a director and writer based in Shanghai, burned more than $20,000 worth of Dolce & Gabbana products, including coats, a vest and bags. 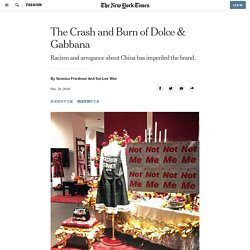 Two Cheers for Sweatshops. They're dirty and dangerous. 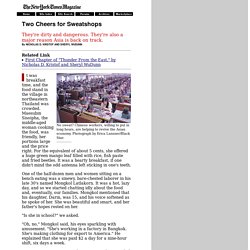 They're also a major reason Asia is back on track. First Chapter of "Thunder From the East," by Nicholas D. Ghost cities. Print Text smaller Text bigger Why is China constructing large, well-designed “ghost cities” that are completely devoid of people? 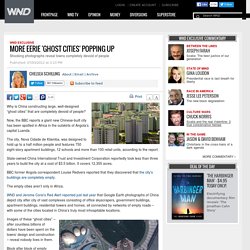 Now, the BBC reports a giant new Chinese-built city has been spotted in Africa in the outskirts of Angola’s capital Luanda. The city, Nova Cidade de Kilamba, was designed to hold up to a half million people and features 750 eight-story apartment buildings, 12 schools and more than 100 retail units, according to the report.

State-owned China International Trust and Investment Corporation reportedly took less than three years to build the city at a cost of $3.5 billion. It covers 12,355 acres. BBC former Angola correspondent Louise Redvers reported that they discovered that the city’s buildings are completely empty. The empty cities aren’t only in Africa. Google image of China's empty roads Images of these “ghost cities” – after countless billions of dollars have been spent on the towns’ design and construction – reveal nobody lives in them. Chinese tea folklore.

The golden light of Guanyin, the smoldering fires of a tea drying shed, callous invading armies in Fujian; they all share a common thread in Chinese tea folklore: chance. 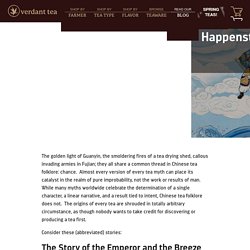 Almost every version of every tea myth can place its catalyst in the realm of pure improbability, not the work or results of man. While many myths worldwide celebrate the determination of a single character, a linear narrative, and a result tied to intent, Chinese tea folklore does not. The origins of every tea are shrouded in totally arbitrary circumstance, as though nobody wants to take credit for discovering or producing a tea first. Consider these (abbreviated) stories: Wu Zetian. Founding empress of the Zhou Dynasty, Empress regnant Wu was the concubine of Emperor Taizong. 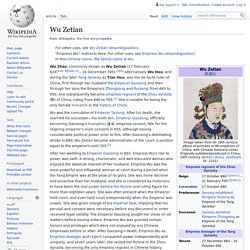 After his death, she married his successor—his ninth son, Emperor Gaozong, officially becoming Gaozong's huanghou (皇后, empress consort, title for the reigning emperor's main consort) in 655, although having considerable political power prior to this. After Gaozong's debilitating stroke in 660, Wu Zetian became administrator of the court, a position equal to the emperor's until 705.[5] After her wedding to Emperor Gaozong in 655, Empress Wu's rise to power was swift. 5G Is Where China and the West Finally Diverge. Against these attitudes, Pompeo and others sounding alarms about Huawei can be perfunctorily dismissed as protectionists, xenophobes, or military hawks. 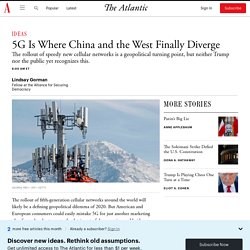 The American secretary of state has become a particular target of criticism in China, where government officials and the media have described him as a font of “lies and fallacies” and a “Cold War warrior.” Yet the West has ample reason for caution about Chinese 5G suppliers. For one, the recent Chinese National Intelligence Law requires these companies to comply with Communist Party demands to turn over data or otherwise engage in snooping or network-disruption activities.

Party-backed actors in China’s public and private sectors also have a long record of cyberattacks on the West, including stealing intellectual property from companies and sensitive personal information on citizens. The case against Huawei isn’t just guilt by association. Yet the West has ample reason for caution about Chinese 5G suppliers. Liu Bei. Shu Han emperor Liu Bei ( Eastern Wu. History[edit] Beginnings and founding[edit] Before the dynasty of Eastern Wu was established, the territory was defended by the Sun clan in the Battle of Red Cliffs. Liu Bei's successor, Liu Shan, and his regent, Zhuge Liang, made peace with Sun Quan later and reaffirmed their previous alliance. Sun Quan declared independence from Wei in 222, but continued to rule as "King of Wu" until 229, when he declared himself "Emperor of Wu". His legitimacy was recognised by Shu. Zhuge Liang. Zhuge Liang ([ʈʂú.kɤ̀ ljâŋ] ( Zhuge Liang was a Confucian-oriented[5] "Legalist".[6] He liked to compare himself to the sage minister Guan Zhong,[6] developing Shu's agriculture and industry to become a regional power.[7] and attached great importance to the works of Shen Buhai and Han Fei,[8] refusing to indulge local elites and adopting strict, but fair and clear laws.

In remembrance of his governance, local people maintained shrines to him for ages.[9] Zhuge is a two-character Chinese compound family name. His name – even his surname alone – has become synonymous with loyalty, intelligence and strategy in Chinese culture. [citation needed] Early life[edit] Jin dynasty (266–420) There are two main divisions in the history of the dynasty. The Western Jin (266–316) was established as a successor state to Cao Wei after Sima Yan usurped the throne, and had its capital at Luoyang and later Chang'an (modern Xi'an); Western Jin reunited China in 280, but fairly shortly thereafter fell into a succession crisis, civil war, and suffered from the invasions instigated by the "Five Barbarians (Wu Hu). " The rebels and invaders began to establish new self-proclaimed states along the Yellow River valley in 304, inaugurating the "Sixteen Kingdoms" era. China.