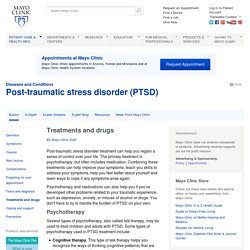 The primary treatment is psychotherapy, but often includes medication. Combining these treatments can help improve your symptoms, teach you skills to address your symptoms, help you feel better about yourself and learn ways to cope if any symptoms arise again. Psychotherapy and medications can also help you if you've developed other problems related to your traumatic experience, such as depression, anxiety, or misuse of alcohol or drugs. You don't have to try to handle the burden of PTSD on your own. Psychotherapy Several types of psychotherapy, also called talk therapy, may be used to treat children and adults with PTSD. Cognitive therapy. All these approaches can help you gain control of lasting fear after a traumatic event. You may try individual therapy, group therapy or both. 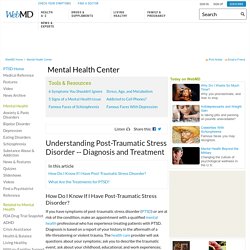 If you have symptoms of post-traumatic stress disorder (PTSD) or are at risk of the condition, make an appointment with a qualified mental health professional who has experience treating patients with PTSD. Diagnosis is based on a report of your history in the aftermath of a life-threatening or violent trauma. The health care provider will ask questions about your symptoms; ask you to describe the traumatic event; ask about your childhood, educational, and work experiences; and relationships with others.

PTSD may also include: Acute stress disorder: symptoms occurring within four weeks of the trauma PTSD with delayed expression : the full collection of symptoms does not appear until at least six months after the trauma PTSD preschool type: applies to children less than 6 years old slideshow A Visual Guide to Generalized Anxiety Disorder start. Post-Traumatic Stress Disorder-Treatment. There are many types of treatment for post-traumatic stress disorder (PTSD). 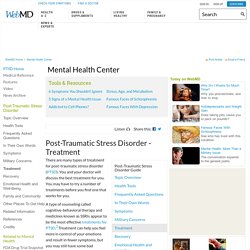 You and your doctor will discuss the best treatment for you. You may have to try a number of treatments before you find one that works for you. A type of counseling called cognitive-behavioral therapy and medicines known as SSRIs appear to be the most effective treatments for PTSD.2 Treatment can help you feel more in control of your emotions and result in fewer symptoms, but you may still have some bad memories. Symptoms & Treatment. What is posttraumatic stress disorder (PTSD)? 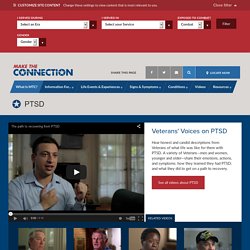 You feel on edge. Nightmares keep coming back. Sudden noises make you jump. You’re staying at home more and more. Could you have posttraumatic stress disorder (PTSD)? If you have experienced severe trauma or a life-threatening event — whether during a time of war or in a noncombat situation — you may develop symptoms of posttraumatic stress, or what is commonly known as PTSD. Some of the most common symptoms of PTSD include recurring memories or nightmares of the event, sleeplessness, loss of interest, and feelings of numbness, anger or irritability, or being constantly on guard, but there are many ways PTSD can impact your everyday life.

“Even though I knew they were just fireworks on the Fourth of July, to me they still sounded like incoming mortars. Treatment for PTSD. The main treatments for people with PTSD are psychotherapy (such as cognitive-behavioral therapy, or CBT), medications, or both. 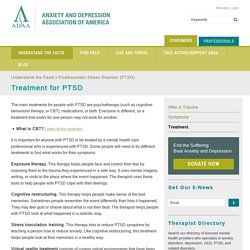 Everyone is different, so a treatment that works for one person may not work for another. What is CBT? Listen to this podcast. It is important for anyone with PTSD to be treated by a mental health care professional who is experienced with PTSD. Some people will need to try different treatments to find what works for their symptoms. PTSD in Military Veterans: Symptoms, Treatment, and Self-Help - Helping Yourself on the Road to Recovery for Post-Traumatic Stress Disorder. Nearly 30% of Vets Treated by V.A. Have PTSD. A new study by the Veterans Administration reveals nearly 30% of its patients who served in Iraq and Afghanistan have PTSD. 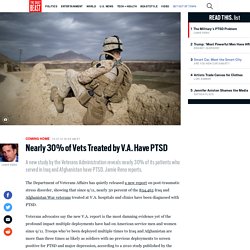 Jamie Reno reports. The Department of Veterans Affairs has quietly released a new report on post-traumatic stress disorder, showing that since 9/11, nearly 30 percent of the 834,463 Iraq and Afghanistan War veterans treated at V.A. hospitals and clinics have been diagnosed with PTSD. Veterans advocates say the new V.A. report is the most damning evidence yet of the profound impact multiple deployments have had on American service men and women since 9/11. Troops who’ve been deployed multiple times to Iraq and Afghanistan are more than three times as likely as soldiers with no previous deployments to screen positive for PTSD and major depression, according to a 2010 study published by the American Journal for Public Health. Why was there evidently no effort to publicize these new PTSD numbers?

“We believe they are downplaying the problem,” Sullivan says. Feature: Post Traumatic Stres Disorder PTSD: A Growing Epidemic / Neuroscience and PTSD Treatments. For an enhanced version of this page please turn Javascript on. 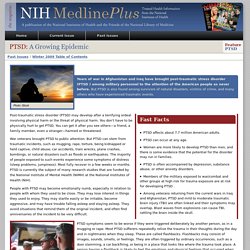 Photo: iStock Years of war in Afghanistan and Iraq have brought post-traumatic stress disorder (PTSD ) among military personnel to the attention of the American people as never before. But PTSD is also found among survivors of natural disasters, victims of crime, and many others who have experienced traumatic events. Fast Facts.