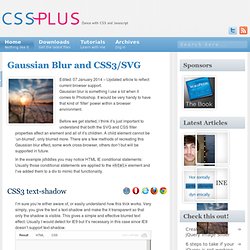 Gaussian blur is something I use a lot when it comes to Photoshop. It would be very handy to have that kind of ‘filter’ power within a browser environment. Before we get started, I think it’s just important to understand that both the SVG and CSS filter properties affect an element and all of it’s children. A child element cannot be ‘un-blurred’, only blurred more. There are a few methods of recreating this Gaussian blur effect, some work cross-browser, others don’t but will be supported in future.

CSS3 Filters: Altering HTML and Images with just CSS. CSS3 Filters are a quite interesting offshoot from SVG, allowing you to modify HTML elements and images with blurs, brightness and a lot more. 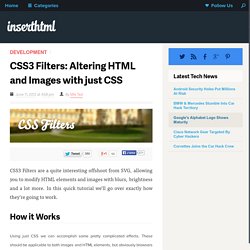 In this quick tutorial we’ll go over exactly how they’re going to work. Using just CSS we can accomplish some pretty complicated effects. These should be applicable to both images and HTML elements, but obviously browsers will vary for the foreseeable future. The property used to control all of this stuff is filter. filter: filter(value); As you might expect though, browser prefixes will be required. StackBlur - A fast, almost Gaussian blur for Canvas by Mario Klingemann, Quasimondo. Blur.js. Cross-browser Image Blur with CSS. In this article I’ll show how to blur photographs using CSS and SVG in modern browsers, with the usual caveats: the techniques I’ll demonstrate will work on all browsers, but only recent versions. blur is similar to the Gaussian Blur filter in PhotoShop; its inclusion in CSS3 and SVG means we can now achieve the same effects natively in the browser (for this example, using an image by Khalil Shah). 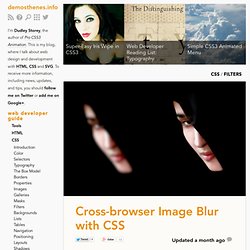 One design caution: if used incorrectly or too frequently, blur may make your users feel that they are visiting your site after a week-long bacchanal, quickly producing a headache. Blur is often combined with a mouse rollover detection that undoes the effect, which I’ll also demonstrate in this article. As before, we’ll apply the easiest version first: the new CSS3 filter.

Before that, our HTML5 content: Then the blur effect, applied via a class: The SVG blur filter. Cross-browser filters with CSS and SVG. For some time now, since Safari 6 and Chrome 18 were released, we’ve been able to use the –webkit-filter CSS property to apply graphical filters to HTML content. 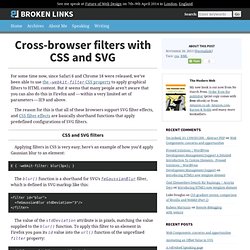 But it seems that many people aren’t aware that you can also do this in Firefox and — within a very limited set of parameters — IE9 and above. Blur.js. Blur.js Take II - A post from jakiestfu. To view Demos and to download, view the post here. 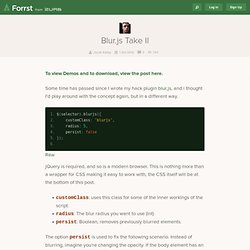 Some time has passed since I wrote my hack plugin blur.js, and i thought I'd play around with the concept again, but in a different way. jQuery is required, and so is a modern browser. This is nothing more than a wrapper for CSS making it easy to work with, the CSS itself will be at the bottom of this post. customClass: uses this class for some of the inner workings of the script.radius: The blur radius you want to use (int)persist: Boolean, removes previously blurred elements. 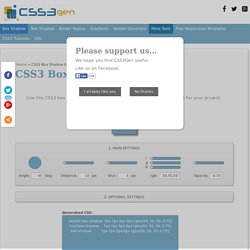 Your browser does not support the CSS3 box-shadow property. You can still use this tool to generate the CSS3 rule, but you won't be able to see the results. <div class="error_msg">Please enable Javascript to use this page. </div> Box Shadow Explained The CSS3 box-shadow property allows you to add depth to your website's design without the need for images or extra container elements. While the syntax is easy to understand, it is hard to visualise the style using just code. The box-shadow syntax works as follows: The first value defines the distance of the box shadow in the x (horizontal) direction and the second value defines the distance in the y (vertical) direction.

Optionally you can include an additional parameter after the blur distance: This defines the spread distance of the shadow. Supporting Browsers. Hover.css - A collection of CSS3 powered hover effects. All Hover.css effects make use of a single element (with the help of some pseudo-elements where necessary), are self contained so you can easily copy and paste them, and come in CSS, Sass, and LESS flavours. 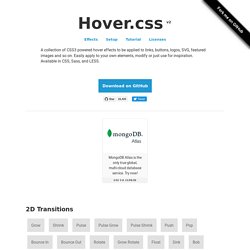 For best results, hover effects use a couple of "hacks" (undesirable but usually necessary lines of code). For more information on these hacks and whether you need them, please read the FAQ. Many effects use CSS3 features such as transitions, transforms and animations. Soothing CSS3 Dropdown Animation. Pure CSS Folded Corner Effect With Animations. Folded Corners Effect with CSS3 Animations made by Charlotte Dann and inspired by this tutorial. 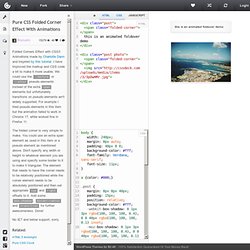 I have improved the markup and CSS code a bit to make it more usable. We could use the ::before or ::after pseudo elements instead of the extra span elements but unfortunately transitions on pseudo elements arn't widely supported. For example I tried pseudo elements in this item but the animation failed to work in Chrome 17, while worked fine in Firefox 11. The folded corner is very simple to make. You could use an extra span element as used in this item or a pseudo element as mentioned above. No IE7 and below support, sorry. Movies In Color. PURE CSS ANIMATED TOGGLES. Hop Over Notification Badge. CSS3 PIE: CSS3 decorations for IE.

Hover.css - A collection of CSS3 powered hover effects. CSS Shadow Experiments. Original Hover Effects with CSS3. HTML5 Showcase - Transitions. CSS Tricks – Floating Labels - ► Shai Raiten. The web is full with amazing designs and people are really taking HTML to the edge, some require JavaScript code, some require CSS 3 features such as Transition and KeyFrames but some only require basic CSS. 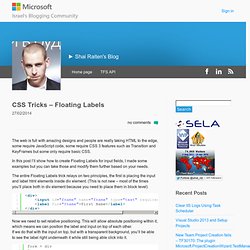 In this post I’ll show how to create Floating Labels for input fields, I made some examples but you can take those and modify them further based on your needs. The entire Floating Labels trick relays on two principles, the first is placing the input and label html elements inside div element. (This is not new – most of the times you’ll place both in div element because you need to place them in block level) Now we need to set relative positioning.

This will allow absolute positioning within it, which means we can position the label and input on top of each other. Demo: Pure CSS speech bubbles. The basic bubble variants This only needs one HTML element. 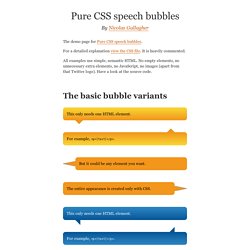