I Told The New York Times: “It’s time for a whole new approach to climate journalism!” CEV. Online Textbooks. Energy. Climate Denial Crock of the Week. Adding yet another clip from my lengthy interview with James Hansen at the American Geophysical Union Fall Meeting. 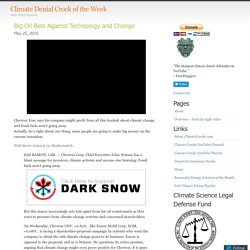 Here, Dr. Hansen speaks in simple, politically astute terms about how best to put a price on carbon. We are already paying a carbon tax, with the lungs, brains, and organs of our citizens, and it is costing us billions. It’s time we face up to consciously pricing fossil fuels so that we can make market based, rational decisions on our energy policy. This vid is the newest addition to my playlist of Scientists Interviews on Climate Change, the playlist Slate’s Bad Astronomer Phil Plait recently called a “great resource”: These really are terrific.

Bill Gates: the energy breakthrough that will “save our planet” is less than 15 years away. Bill Gates is one of those people for whom "needs no introduction" is actually true. 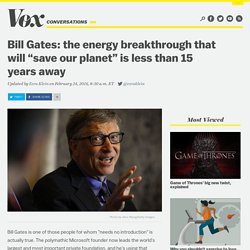 The polymathic Microsoft founder now leads the world's largest and most important private foundation, and he's using that platform to predict that we're finally on the cusp of the clean energy breakthrough that's going to save the world. I spoke with Gates about a week ago for nearly an hour. We talked about whether innovation is actually enough to stop climate change, why rich countries need to drive their carbon emissions down to zero, the controversial idea that technological innovation is slowing down (Gates disagrees with it, to say the least), how close we are to true artificial intelligence, and whether Americans are still good at taking intellectual risks. A transcript of our conversation, edited for length and clarity, follows.

You can listen to the full discussion on my podcast (subscribe here!). Ezra Klein: Why don't we begin with the big prediction in your annual letter. Safer Nuclear Power, at Half the Price. Transatomic is developing a new kind of molten-salt reactor designed to overcome the major barriers to nuclear power. 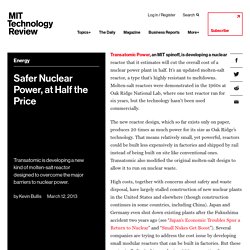 Nuclear energy is a potential source of low-carbon baseload power, but it needs cheaper, safer technology to take off. Transatomic Power, an MIT spinoff, is developing a nuclear reactor that it estimates will cut the overall cost of a nuclear power plant in half. It’s an updated molten-salt reactor, a type that’s highly resistant to meltdowns. Molten-salt reactors were demonstrated in the 1960s at Oak Ridge National Lab, where one test reactor ran for six years, but the technology hasn’t been used commercially. The new reactor design, which so far exists only on paper, produces 20 times as much power for its size as Oak Ridge’s technology. High costs, together with concerns about safety and waste disposal, have largely stalled construction of new nuclear plants in the United States and elsewhere (though construction continues in some countries, including China). Fossil fuel electricity with no pollution? This company is building a power plant to prove it.

I have always been skeptical about carbon capture and sequestration at fossil-fueled power plants. 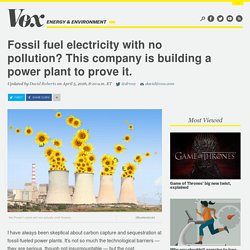 It's not so much the technological barriers — they are serious, though not insurmountable — but the cost. Fossil fuel power plants have steadily gotten more efficient, but the problem is, no matter how efficient your plant is, capturing the carbon dioxide emissions involves bolting on a second facility to process and separate the waste gases. That second facility requires power (it's a "parasitic load," cutting into efficiency), and it adds to capital costs. Coal and natural gas are already losing out to wind in many areas, without sequestration. Big solar is heading for boom times in the US. When people think of solar power, they tend to think of panels on rooftops. 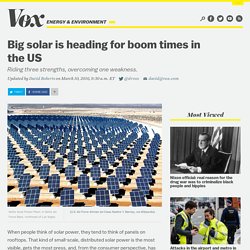 Why America abandoned nuclear power (and what we can learn from South Korea) There's a simple, compelling argument that the world ought to be building many more nuclear power plants. 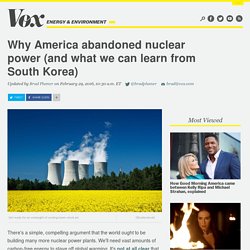 We'll need vast amounts of carbon-free energy to stave off global warming. It's not at all clear that renewables can do the job alone. And nuclear is a proven technology, already providing 11 percent of electricity globally. So what's the catch? Cost, cost, cost. Ever since, experts have been debating whether or not nuclear's cost problems are an intrinsic flaw that will doom the technology. But there's also an optimistic story for nuclear — and one that I think is worth hearing out. Nuclear construction costs in the US did spiral out of control, especially after the Three Mile Island meltdown in 1979. Why America abandoned nuclear power (and what we can learn from South Korea)