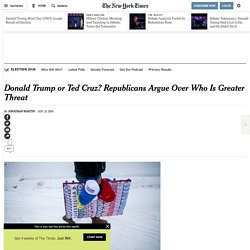 Trump and Senator Ted Cruz battling for the Republican nomination, two powerful factions of their party are now clashing over the question: Which man is more dangerous? Conservative intellectuals have become convinced that Mr. Trump, with his message of nationalist-infused populism, poses a dire threat to conservatism, and released a manifesto online Thursday night to try to stop him. However, the cadre of Republican lobbyists, operatives and elected officials based in Washington is much more unnerved by Mr. The division illuminates much about modern Republicanism and the surprising bedfellows brought about when an emerging political force begins to imperil entrenched power.

The Republicans who dominate the right-leaning magazines, journals and political groups can live with Mr. Rich Lowry, the editor of National Review — embracing the role of his predecessor, William F. OPEN Graphic Graphic: 2016 Delegate Count and Primary Results And, even if Mr. Mr. Mr. President Obama’s Interview With Jeffrey Goldberg on Syria and Foreign Policy. Friday, August 30, 2013, the day the feckless Barack Obama brought to a premature end America’s reign as the world’s sole indispensable superpower—or, alternatively, the day the sagacious Barack Obama peered into the Middle Eastern abyss and stepped back from the consuming void—began with a thundering speech given on Obama’s behalf by his secretary of state, John Kerry, in Washington, D.C. 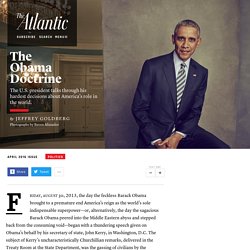 The subject of Kerry’s uncharacteristically Churchillian remarks, delivered in the Treaty Room at the State Department, was the gassing of civilians by the president of Syria, Bashar al-Assad. Obama, in whose Cabinet Kerry serves faithfully, but with some exasperation, is himself given to vaulting oratory, but not usually of the martial sort associated with Churchill. Obama believes that the Manichaeanism, and eloquently rendered bellicosity, commonly associated with Churchill were justified by Hitler’s rise, and were at times defensible in the struggle against the Soviet Union. “Free riders? Log In. In fact, a contested convention would not only be democratic enough, it would be more democratic than what we have now. 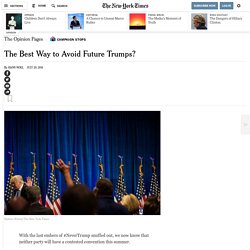 A modest number of reforms might make them more common (though not regular). Proportional representation and a shorter primary calendar would lead to contested conventions when no candidate can win a majority. If candidates paid attention to the delegates they were sending to the convention, those could represent voters in all states much better than is done in the current system.

Today, our presidential primary system, open to voters as it is, is grossly undemocratic. The problem is not caucuses, although they undermine democracy with their barriers to participation. The problem isn’t really with the embarrassingly low turnout either, which in primaries averages about 20 percent (though it’s hard to say that “the people have spoken” with a straight face when four in five eligible voters remained silent).

No, the real problem lies in the sequence. Donald Trump or Ted Cruz? Republicans Argue Over Who Is Greater Threat. In order to increase competition in U.S. House races, states should look to extra-legislative bodies to redraw congressional boundaries. Politicians and pundits alike regularly bemoan the lack of electoral competition in congressional races as incumbent reelection rates frequently soar to over 90 percent. 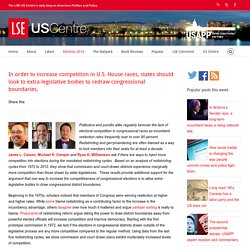 Redistricting and gerrymandering are often blamed as a way to lock members into their seats for at least a decade. Jamie L. Carson, Michael H. Crespin and Ryan D. Williamson ask if there are ways to inject more competition into elections during the mandated redistricting cycles. Beginning in the 1970s, scholars noticed that members of Congress were winning reelection at higher and higher rates.

Unable to come up with a redistricting plan for the 1966 congressional elections, the Maryland General Assembly left it to the courts to draw new district boundaries. In the following decades, additional states such as Connecticut, Hawaii, Maine, and Montana also tried to move redistricting, partially or in whole, toward an extra-legislative process. Figure 1 – Proportion of Competitive Races by District Type About the author.