Why does girls education matter? Because investing in girls&women can change the world! United Nations Girls' Education Initiative - Resources - By Title. Girls' education and gender equality. Despite progress in recent years, girls continue to suffer severe disadvantage and exclusion in education systems throughout their lives. 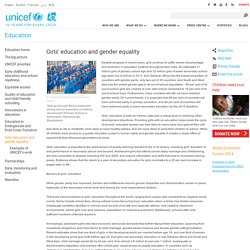 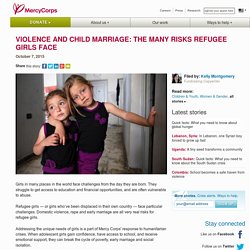 They struggle to get access to education and financial opportunities, and are often vulnerable to abuse. Refugee girls — or girls who’ve been displaced in their own country — face particular challenges. Domestic violence, rape and early marriage are all very real risks for refugee girls. Barriers to Education for Syrian Refugee Children in Jordan. Today, Syrian refugee children in Jordan face a bleak educational present, and an uncertain future. 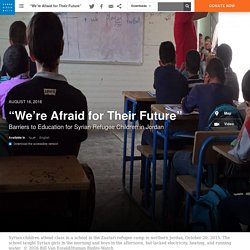 Close to one in three—226,000 out of 660,000—Syrians registered with the United Nations refugee agency in Jordan are school-aged children between 5-17 years old. Of these, more than one-third (over 80,000) did not receive a formal education last year. There are almost 1.3 million Syrians today in Jordan, a country of 6.6 million citizens. Vodafone 'Instant Classroom' is digital school in a box for refugees. The Vodafone Foundation has unveiled a portable "Instant Classroom" that it hopes will give 15,000 child refugees across Africa access to tablet-based education. 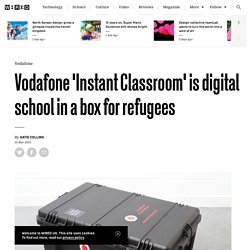 The digital school in a box, which has been unveiled at Mobile World Congress in Barcelona, can be set up in 20 minutes and can be used in classrooms where there is no electricity. The Foundation has partnered with UNHCR to bring the Instant Classroom to 12 schools in Kenya, Tanzania and the Democratic Republic of Congo (DRC) over the next 12 months. Each Instant Classroom is shipped in a secure and robust case that weighs 52kg and comes equipped with a laptop, 25 tablets pre-loaded with educational software, a projector, a speaker and a hotspot modem with 3G connectivity. The Classroom can be charged as a single unit from one power source in 6-8 hours, after which it can be used in a for an entire day without access to electricity.

Vodafone Foundation. 7 art initiatives that are transforming the lives of refugees. Social Media, SMS Outreach to Refugees. FACTSHEET ZaatariRefugeeCamp April. Zaatari360. International Day of the Girl: What's in the day of a refugee girl? Photo: Cassandra Nelson/Mercy Corps Across the globe, girls’ lives are very much the same — they’re telling secrets, laughing with friends, cleaning their rooms, helping with dinner, doing their homework. 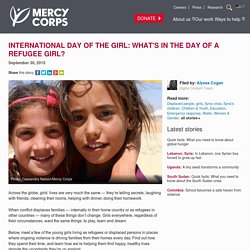 When conflict displaces families — internally in their home country or as refugees in other countries — many of these things don’t change. Girls everywhere, regardless of their circumstances, want the same things: to play, learn and dream. Below, meet a few of the young girls living as refugees or displaced persons in places where ongoing violence is driving families from their homes every day. The Benefits of Education. The Zaatari Refugee Camp — LIVED.

As an attempt to have the camp organized as a city, Zaatari was divided into 12 districts, with representatives chosen from each district.

Leadership in the camp remains an issue with the presence of gang leaders, which is why UNHCR is hoping to have traditional Syrian leaders who were previously involved in their communities stepping up as positive leaders in the districts. The oldest part of the camp, Districts 1 and 2, is surnamed the ‘Old City’, and whilst it benefits from close access to services such as schools and hospitals, it is one of the highest densely populated area of Zaatari refugee camp. UNHCR is trying as much as possible to regroup refugees from the same previous Syrian communities into the same district, as an attempt to foster a sense of community within each district. The camp’s expansion and organization has been beneficial to many refugees, with the implementation of a taxi system, shopping streets, etc.

Inside Zaatari refugee camp: the fourth largest city in Jordan. Indeed, Zaatari’s basic structure was constructed in just nine days and was initially home to just 100 families, but after exponential growth it is now home to 81,000 inhabitants, all living within its five-mile circumference. 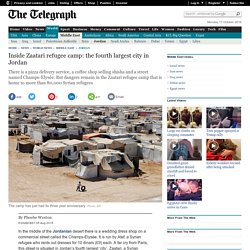 Since the civil war began, approximately half of the country's 22 million population has been displaced. High cases of rape and young marriage Due to the unplanned nature of the camp’s growth, administrators have found it particularly challenging to manage; people can move their tents and caravans and services are unevenly distributed across its vast expanse. For many residents, accessing basic services is a daily challenge as health and education services can be far away from where they live. For example, out of 12 districts, at the moment only three have schools.

Even war won’t stop these girls from making their dreams come true – Uprooted – Medium. It is a cold, damp February day in Jordan, and Zaatari refugee camp is a sea of mud from last night’s rain and snow.

In a small white caravan on the edge of the camp, 30 girls sit in a circle. A few have quick conversations with their neighbors, then resume their silent thinking with the others. The Challenge of Education. Five stories of hope from Zaatari refugee camp. Half of the 30,000 Syrian school-aged children in the camp are out of school. 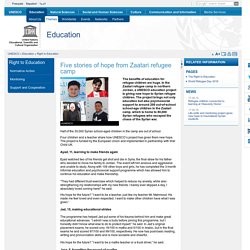 Four children and a teacher share how UNESCO’s project has given them new hope. The project is funded by the European Union and implemented in partnership with War Child UK. Ayad, 11, learning to make friends again. UNHCR - Education. Education is a basic human right, enshrined in the 1989 Convention on the Rights of the Child and the 1951 Refugee Convention. 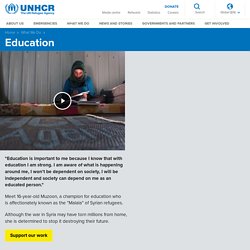 It is also a vital aspect of our work at UNHCR. Of the nearly 20 million refugees under our care, half are children below the age of 18. Education in the Second Largest Refugee Camp in the World. UNICEF report highlights Syrian children’s struggles to continue their education “I have told other girls my age that they should go to school in the camp, otherwise they will lose a year.

Some have registered at the school, but they are not going to class anymore. They tell me that they will go back to school when they return to Syria. But I say: What if we stay here for a long time? International Rescue Committee (IRC) Poor access to education can undermine people’s potential to improve their lives. The International Rescue Committee provides children, youth and adults with educational opportunities that help keep them safe and learning the skills they need to survive and thrive. Learn more about our education goals and how we are working to meet them: Ensure that children aged 0 to 5 develop cognitive and social-emotional skills. Syria refugee crisis FAQ: What you need to know. “The children of Syria have experienced more hardship, devastation, and violence than any child should have to in a thousand lifetimes,” says Dr. Christine Latif, World Vision’s response manager for Turkey and northern Syria. World Vision staff in the region say the situation in Aleppo city is the most dire they have ever seen it.

World Vision has worked in Aleppo governorate since 2013. “Civilians have been continually in harm’s way, caught in the cross-fire and changing front lines. Quick facts: What you need to know about the Syria crisis. Editor's note: This article was originally published August 13, 2013; it was updated October 13, 2016 to reflect the latest information. Donate ▸ Syria’s civil war is the worst humanitarian crisis of our time. Half the country’s pre-war population — more than 11 million people — have been killed or forced to flee their homes.