Read the thrilling historical mystery novel of life & death revealing the power politics of today @ A thrilling exposé of mystery and intrigue links the power politics of today directly to the seamy spy rings of Queen Elizabeth 1st. Told through the eyes of Mrs G, an American women of today she seeks to uncover the truth of the death of the man she loves. The story reveals the tale of one of the world’s best known men whose rightful claim to the thrones of England and America has been concealed until this day. From Washington to London to Paris and the castles of the Templars, Mrs G has only weeks in which to decrypt clues from the distant past of the Kaballah and the bloodline of Christ himself. As she delves into a world of mysticism she exposes modern science to criticism in its suppression of a superior occult intelligence known only to those who have ruled the world down the Centuries, as they still do today.

History. Science and Technology 2. How to survive a global disaster: a handy guide. On 22 June, 2013, Tara O’Toole and Thomas Inglesby of the Johns Hopkins Center for Civilian Biodefense Strategies, organised a war game like no other. 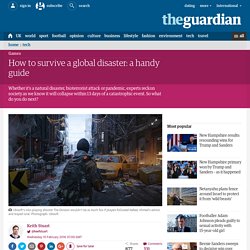 The two researchers, working with an array of bodies such as the ANSER Institute for Homeland Security, set out to simulate the effects of a biological attack on the US. The project was called Operation Dark Winter.