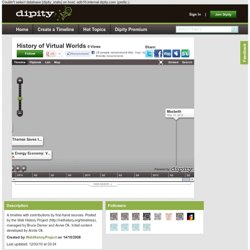 Virtual world interoperability is enabled through the Open Grid Protocol, under development by the Architecture Working Group of Second Life residents. IBM and Linden Lab Interoperability Announcement IBM and Linden Lab announced that research teams from the two companies successfully teleported avatars from the Second Life Preview Grid into a virtual world running on an OpenSim server, marking the first time an avatar has moved from one virtual world to another. Vivaty, private beta in Facebook Apr 2008 Vivaty brings together your friends, photos, and videos in a personal virtual scene in the browser. 3DXplorer beta launches. CyanWorlds.com Engine - OpenUru. CyanWorlds.Com Engine (CWE) Open Source Project The wait is over! 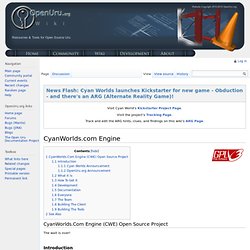 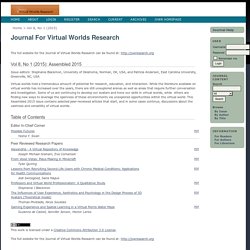 While the literature available on virtual worlds has increased over the years, there are still unexplored arenas as well as areas that require further conversation and investigation. Some of us are continuing to develop our avatars and hone our skills in virtual worlds, while others are finding new ways to leverage the openness of these environments via unexplored opportunities within the virtual world. Table of Contents Editor In-Chief Corner. AppEdTech (AET) AMDM. BLUE MARS 3D Social Experience - Play, Chat, Create. 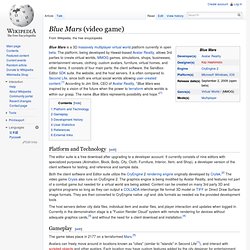 The platform, being developed by Hawaii-based Avatar Reality, allows 3rd parties to create virtual worlds, MMOG games, simulations, shops, businesses, entertainment venues, clothing, custom avatars, furniture, virtual homes, and other items. It consists of four main parts: the client software, the Sandbox Editor SDK suite, the website, and the host servers. It is often compared to Second Life, since both are virtual social worlds allowing user-created content.[1] According to Jim Sink, CEO of Avatar Reality, "Blue Mars was inspired by a vision of the future when the power to terraform whole worlds is within our grasp. The name Blue Mars represents possibility and hope. The editor suite is a free download after upgrading to a developer account. The host servers deliver city data files, individual item and avatar files, and player interaction and updates when logged in. Compiling 3Di Viewer “Rei” Firefox Plugin. In the following instructions, the string MOZ will refer to the location where you installed Firefox, which is typically C:/Program Files/Mozilla Firefox.

If you have installed the 3Di OpenViewer plugin from , uninstall it first. If you do not do this, it is conceivable that the existence of some files from the official 3Di OpenViewer may interfere with correct operation of the open source 3Di Viewer “Rei”, which is why it is recommended to uninstall 3Di OpenViewer before attempting to install the open source 3Di Viewer “Rei”. Copy the following files from SRC/3di-viewer-rei-firefox/bin/ to MOZ/plugins/ npOpenViewer.dll npOpenViewer.xpt Copy the entire folder contents (including subfolders) from SRC/3di-viewer-rei/bin to MOZ/ Virtual Events in 3D, 3DXplorer,conference trade-show meeting collaboration cloud computing elearning marketing virtual worlds classroom 3D websites,no download. Virtual tour by Tixeo. Openlifegrid.com a free Virtual World in 3D, created by users for users. Project: MyWorld. 3D Virtual Meetings. Entropia Universe Portal.