We Are Living In A Hologram Designed By Aliens, Says NASA Scientist. (Before It's News) in5d.com by MessageToEagle, Who says there are no open-minded scientists at NASA? 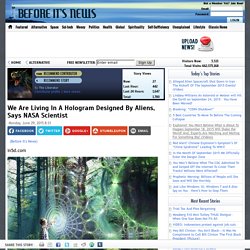 A NASA scientist suggests you are living inside a hologram created by advanced alien species. What if everything you have ever done or will do is simply the product of a highly-advanced computer code? This was the intriguing theory first proposed by Nick Bostrom, Professor in the Faculty of Philosophy at Oxford University and founding Director of the Future of Humanity Institute and of the Programme on the Impacts of Future Technology within the Oxford Martin School, there are several scientists who subscribe to this theory. This would imply that we are living in a holographic world and everything around us, including ourselves is not “real”. “In quantum mechanics, particles do not have a definite state unless they’re being observed. “Many theorists have spent a lot of time trying to figure out how you explain this. However, there also those who think the Matrix theory is flawed. 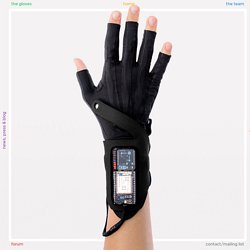 Our software allows this information to be mapped to musical control messages which can then be easily routed to your favorite music software. Programable RGB led for data feedback. vibration motor activation to provide the user with tactile feedback about what's happening inside the software, without needing to watch a computer screen. high precision flex sensors over knuckles, specifically the gloves track the following: The orientation of your hand, the “flex” of your fingers, Your current hand posture (e.g. fist, open hand, one finger point), the direction (up, down, left, right, forwards, backwards) of your hand, sharp movements such as drum hits. the glove is also loaded with our secret weapon: x-OSC (designed by Tom and Seb). DARPA Wants To Make Computer Networks Look More Like Sci-Fi Graphic Novels. Super-Humanizing: Virtual Reality, Music and the Coming Revolution. On Monday morning I drove by Candlestick Park as the first demolition crews set to work on the grand old thing. 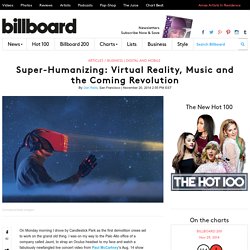 I was on my way to the Palo Alto office of a company called Jaunt, to strap an Oculus headset to my face and watch a fabulously newfangled live concert video from Paul McCartney's Aug. 14 show at Candlestick, billed as the venue's last major event. Soon after I arrived I was led to a conference room where I sat in a comfortable rolling chair in the center of a conference room outfitted with computers and cables. Moments later I was just a few feet from Sir Paul as he banged and belted "Live and Let Die" to a crowd of tens of thousands. Did he just wink at me? I swiveled the chair to watch drummer Abe Laboriel, Jr., bash as the band came in, and suddenly found myself looking down the front of the stage in a pyrotechnic storm.

The illusion of "being there" or "presence" is often invoked by VR enthusiasts. The industry appears to staking some flags in the virtual frontier. SCiO - Consumer Physics. Conran Holo™ Home. Second Surface. An environment for creative collaboration is significant for enhancing human communication and expressive activities, and many researchers have explored different collaborative spatial interaction technologies. 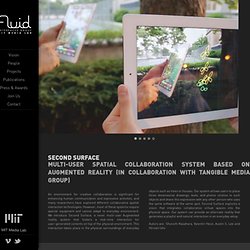 However, most of these systems require special equipment and cannot adapt to everyday environment. We introduce Second Surface, a novel multi-user Augmented reality system that fosters a real-time interaction for user-generated contents on top of the physical environment. This interaction takes place in the physical surroundings of everyday objects such as trees or houses. Our system allows users to place three dimensional drawings, texts, and photos relative to such objects and share this expression with any other person who uses the same software at the same spot.

Second Surface explores a vision that integrates collaborative virtual spaces into the physical space. #RT - Romain Tardy. Graphs Of Wikipedia: Influential Thinkers. The internet is big — very big. One such way to investigate all of this free online content is through graphs. The network visualisations by Simon Raper in his fantastic post about graphing the history of philosophy is one example of how to exploit such data. Let’s take this a step further and create a series of graphs using everyone on Wikipedia. Using subsets of this dataset (authors, actors, sports players etc.), we can investigate sub-networks within the larger dataset. In the next series of posts, I will present a few of my findings in each of these sub-networks. To start, let’s look at how people influenced each other throughout history as entered by the authors of Wikipedia. Our focus will be down the bottom: Leviathan. Sundance TV The Red Road FITC Amsterdam 2014 Opening Titles Warehouse Manifesto Amon Tobin Wooden Toy John Deere Product Launch Event. 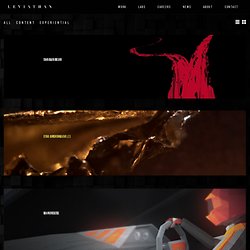