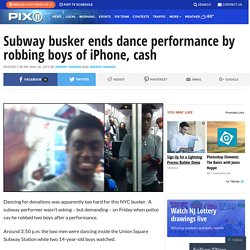 A subway performer wasn’t asking – but demanding – on Friday when police say he robbed two boys after a performance. Around 3:50 p.m. the two men were dancing inside the Union Square Subway Station while two 14-year-old boys watched. After dancing, one performer lured the boys to the other side of the L line platform and forced them to give up an iPhone and $30. The suspect told both boys to get on an incoming train and leave the station.

Police describe the suspect as a black male, between 17 and 19, approximately 5’08”, 170 lbs. with medium length black hair. Anyone with information is asked to call the anonymous police tip line Crime stoppers at 1-800-577-TIPS (8477). My Newz / A longtime Horace Mann School board member accused of hushing up allegations of sexual abuse at the elite prep institution has been stripped of his title as an emeritus trustee — a symbolic change for former students who say they endured years o. My Newz / Keith Anthony was blasted once in the torso outside the unruly bash on E. 51st St. near Avenue L in Flatlands about 2:45 a.m., police and witnesses said. PBS. Fifty Undiscovered.

Peerbackers. Peerbackers is a place for entrepreneurs & individuals all over the world to promote and fund their ventures, projects or ideas – whether they are for-profit, non-profit or creative. We don’t have too many rules (there’s enough in the real world already!) , but we require that you cooperate with the following: General Community We do not allow: Offensive, disrespectful or obscene contentuse of copyrighted material without permission from ownerpromotion of your venture on other entrepreneur’s pages. Venture/Project: offers of financial return. Anyone who violates the above rules or our Terms of Use may be suspended from their peerbacker’s account or permanently prohibited for using our site. How To Travel The World For Free (Seriously)

10-10-10: What It Means To The Geek Crowd And Beyond. By Ray Willington It is being called a multitude of things: the Powers of Ten Day, Eames Day, 42 Day, etc. 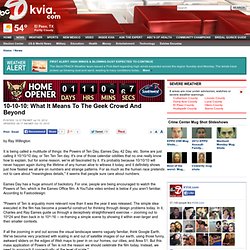 Some are just calling it 10/10/10 day, or Ten Ten Ten day. It's one of those calendar oddities that no one really know how to explain, but for some reason, we're all fascinated by it. It's probably because 10/10/10 will never happen again during the lifetime of any human alive to witness it today, and it definitely shows just how fixated we all are on numbers and strange patterns. For as much as the human race pretends not to care about "meaningless details," it seems that people sure care about numbers. Eames Day has a huge amount of backstory. "Powers of Ten is arguably more relevant now than it was the year it was released.

If all the zooming in and out across the visual landscape seems vaguely familiar, think Google Earth. Feedly Your Mind. Cantrap - Your site for spells, magical technique, magical theory, and divination. New Tamper-Resistant OxyContin Tablets to be Released August 2010 - National Association of Boards of Pharmacy® (NABP®) Reformulated OxyContin® tablets, designed to prevent abuse of the prescription pain medication, will be released during the month of August 2010. 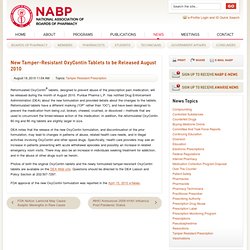 Purdue Pharma L.P. has notified Drug Enforcement Administration (DEA) about the new formulation and provided details about the changes to the tablets. Reformulated tablets have a different marking (“OP” rather than “OC”), and have been designed to prevent the medication from being cut, broken, chewed, crushed, or dissolved – methods that are used to circumvent the timed-release action of the medication. In addition, the reformulated OxyContin 60 mg and 80 mg tablets are slightly larger in size. DEA notes that the release of the new OxyContin formulation, and discontinuation of the prior formulation, may lead to changes in patterns of abuse, related health care needs, and in illegal activities involving OxyContin and other opioid drugs.