Rgbdslam. Electric: Cannot load information on name: rgbdslam, distro: electric, which means that it is not yet in our index. 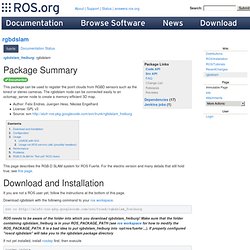 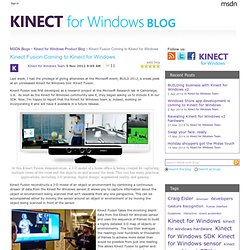 Kinect Fusion was first developed as a research project at the Microsoft Research lab in Cambridge, U.K. As soon as the Kinect for Windows community saw it, they began asking us to include it in our SDK. Now, I’m happy to report that the Kinect for Windows team is, indeed, working on incorporating it and will have it available in a future release. In this Kinect Fusion demonstration, a 3-D model of a home office is being created by capturing multiple views of the room and the objects on and around the desk. This tool has many practical applications, including 3-D printing, digital design, augmented reality, and gaming. Compact Map Building - Georgia Tech Mobile Robot Laboratory. PrimeSense shows off tiny Capri sensor, yearns for 3D-sensing future (hands-on) Kinect for Windows Programming Deep Dive. Comparison of ReconstructMe, KinectFusion and Skanect. MeshLab.

PCL - Point Cloud Library. Using Kinfu Large Scale to generate a textured mesh. This tutorial demonstrates how to use KinFu Large Scale to produce a mesh (in meters) from a room, and apply texture information in post-processing for a more appealing visual result. 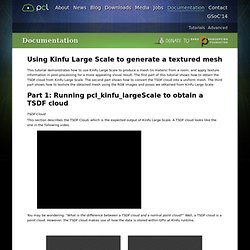 Matterport 3D camera aims to map your interior world, display it from the cloud. March 07, 2013 08:00 AM Eastern Time Matterport Unveils $5.6 Million Funding to 3D Capture Everything, Even the Kitchen Sink MOUNTAIN VIEW, Calif. 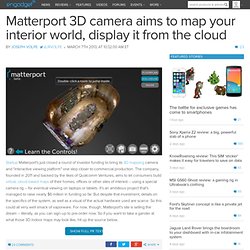 --(BUSINESS WIRE)--Matterport, the leader in rapid 3D scanning of spaces and objects, announced today that it raised a $5.6 million Series A financing round to create immersive experiences with interior spaces, starting with your home. Lux Capital led this latest investment round, with participation from Felicis Ventures, Red Swan Ventures, Greylock, Qualcomm Ventures, as well as a number of prominent Silicon Valley angels. "We welcome the participation of these investors," said Matt Bell, inventor of the camera and Matterport co-founder.

"Together we are transcending limitations of the physical world by allowing people to communicate in 3D. " "Matterport makes the extraordinary look easy," said Peter Hebert, Co-Founder and Managing Partner of Lux Capital. About SCENECT. 3D Scan 2.0. Scanning The only things you need are our framework, the Kinect and some AR markers. 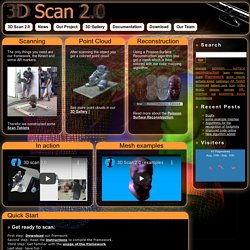 Therefor we constructed some Scan Tablets Point Cloud After scanning the object you get a colored point cloud. Kintinuous: Spatially Extended KinectFusion. Michael Kaess @ CSAIL. Here are some of my current and past projects at MIT. 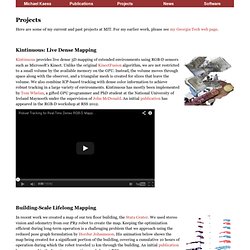 For my earlier work, please see my Georgia Tech web page. Kintinuous: Live Dense Mapping Kintinuous provides live dense 3D mapping of extended environments using RGB-D sensors such as Microsoft's Kinect. Unlike the original KinectFusion algorithm, we are not restricted to a small volume by the available memory on the GPU. Instead, the volume moves through space along with the observer, and a triangular mesh is created for slices that leave the volume. Building-Scale Lifelong Mapping In recent work we created a map of our ten floor building, the Stata Center. iSAM2 and the Bayes Tree Exploring the connection of sparse linear algebra and graphical models yielded new insights into the probabilistic interpretation of matrix factorization, formalized in the Bayes tree (WAFR10 paper). KScan3D. Tom Whelan. Kintinuous - AAAI 2012 Video Competition Contribution. KinectHacks.net.

Kinect-carrying drone automatically builds 3D maps of rooms. Google Street View eat your heart out: An MIT-built quadrocopter uses Microsoft Kinect, and some smart odometry algorithms, to fly around a room and spit out a 3D map of the environment. 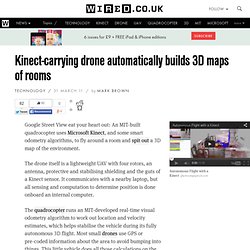 The drone itself is a lightweight UAV with four rotors, an antenna, protective and stabilising shielding and the guts of a Kinect sensor. It communicates with a nearby laptop, but all sensing and computation to determine position is done onboard an internal computer. The quadrocopter runs an MIT-developed real-time visual odometry algorithm to work out location and velocity estimates, which helps stabilise the vehicle during its fully autonomous 3D flight. Most small drones use GPS or pre-coded information about the area to avoid bumping into things. This little vehicle does all those calculations on the fly. Odometry is the process of using data from some kind of sensor to figure out position, like measuring how far a robot's legs or wheels have moved to determine how far it has travelled. Rapidform.dll. ReconstructMe. ReconstructMe and Realistic 3D Scans. May 10, 2012 in Scanning by Tim Owens I’ve been playing recently with a great new piece of software called ReconstructMe which is free for now and Windows only. 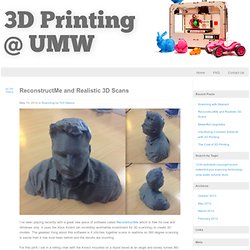 It uses the Xbox Kinect (an incredibly worthwhile investment for 3D scanning) to create 3D models. The greatest thing about this software is it stitches together scans in realtime so 360 degree scanning is easier than it has ever been before and the results are stunning. Mark Florquin³ ReconstructMe - Automatic Volume Stitching (Tech Preview)