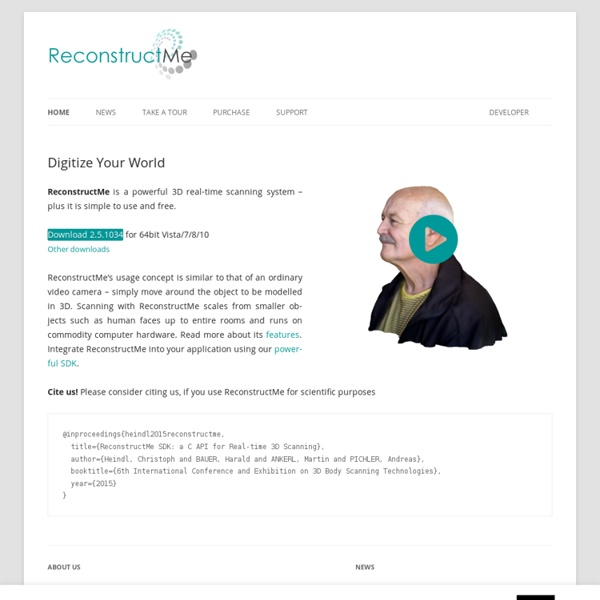 Scan 3D : premiers pas en photogrammétrie Cour Khorsabad - Musée du Louvre by shadows44 on Sketchfab Notre-Dame de Paris by shadows44 on Sketchfab Coat of arms of Charles V by shadows44 on Sketchfab Blender 2.67 RC1 and DVD Training Blender for 3D Printing Released April 28, 2013 Open-source 3D creation suite Blender has released the first Release Candidate of Blender 2.67. Major improvements are the inclusion of FreeStyle, subsurface scattering for Cycles, optimizations in the motion tracker and the new 3D printing toolkit. The new 3D printing toolkit is a collection of useful tools including statistics, error checking, cleanup and export, to make it easier to export models for 3D printing. Statistics: The volume of the mesh and the combined area of all faces are calculated.

3D printing commentary Thingiverse user Dizingof, well known for intricate latices work designs, recently removed most of his designs from thingiverse in response to 3DSystems and Stratasys ignoring the non-commercial license associated with his things and using his designs to market their product. There are so many facets to this story I can't decide which one I want to talk about. For starters there's two huge companies ignoring licenses protecting a little guy because what's he going to do, sue them? It is disgraceful and shameful and probably not going to effect their bottom line in the least. Gigantic Energy-Generating Waterfall Skyscraper Could Power the 2016 Rio Olympics This renewable energy generating tower located on the coast of Rio is one of the first buildings we’ve seen designed for the 2016 Rio Olympics, and boy, is it crazy! (In case you didn't notice, it's also a waterfall.) The Solar City Tower is designed by Zurich-based RAFAA Architecture & Design, and features a large solar system to generate power during the day and a pumped water storage system to generate power at night.

GLSL 1.2 Tutorial In this tutorial shader programming using GLSL 1.2 will be covered. Although many parts are now considered deprecated, the essence of GLSL has remained constant. Besides, this tutorial will continue to be online because learning the basics of deprecated OpenGL is easier than learning the new versions. If you’re looking for a GLSL tutorial that deals only with non-deprecated features visit the GLSL Core tutorial, here in Lighthouse3D. Shaders are a hot topic and 3D games have shown that they can be put to good use to get remarkable effects. KiCadLib: Device and Footprint Library for KiCad This is a collection of electronic device symbols and footprints for KiCad which is used by other projects on open-project.ch. Please leave a comment, if you find this library useful! Download The library can be downloaded from github at Be aware that the latest version of KiCad uses different internal units (mm instead of deci-mills) and thus footprints designed in the latest version are incompatible with older versions. Therefore, two branches exist in the git repository: master for the latest KiCad version, deci-mills for older versions.

KSCAN 3D Scanning Software KSCAN 3D Scanning Software KSCAN 3D is a powerful and affordable 3D Scanning software. Used in conjunction with Microsoft Kinect or Asus Xtion sensors (not included), KSCAN enables the generation, merging, rendering and editing of complex 3D forms - including human bodies, furniture, small parts, you name it. 3D Scanner: FabScan Pi There are several way to build an affordable 3D scanner for your home. One way is to make photos (maybe even automatisied) from all sides of an object and let Autodesk 123D Catch do its magic. Another option is to use a depth camera like the Kinect and place your object on a rotating table and get depth images of all sides - great especially for a person scanner. A cheap option is using a line laser which enlights on line on a object, get a camera image of that line and then rotate the object a bit and repeat - until you get the 3D form out of this slices when you have rotated the obect by 360 degree.

WebGL Inspector An advanced WebGL debugging toolkit About WebGL Inspector is a tool inspired by gDEBugger and PIX with the goal of making the development of advanced WebGL applications easier. What Firebug and Developer Tools are to HTML/JS, WebGL Inspector is to WebGL. Note: this is alpha software - if you find bugs, let me know (or better yet, fork and fix them! Studio Basic netfabb Basic is available to anybody, it is free just like in free beer, and runs on Windows, Linux or Mac. netfabb Basic is not just a viewer, it provides mesh edit, repair and analysis capabilities to everyone already being or aspiring to become part of this fantastic, growing, creative, high-tech industry called Additive Manufacturing, Rapid Prototyping or 3D Printing. netfabb Basic is available and is just one click away. Its compact size of only a few megabytes allows a quick download, an easy installation and the handling of STL and slice files within seconds.

Disney Research's gloveless REVEL system adds virtual textures to physical objects Having long been successful with "talkies," Disney has developed technology that could allow the creation of "feelies." While designed more for touchscreens than the silver screen, the REVEL system developed at Disney Research uses reverse electrovibration to bring computerized control over the sense of touch, thereby allowing programmers to change the feel of real-world surfaces and objects without requiring users to wear special gloves or use force-feedback devices. View all One obstacle to attaining immersive augmented reality is that certain senses are difficult to fool into accepting virtual information. Touch, in particular, has many facets, each of which must be tricked into experiencing a virtual reality. If you squeeze a virtual tennis ball in your hand, you must not only feel the mass and compressibility of the ball, but also feel the texture of the ball's surface.