The Pacific Gas & Electric Company, the utility whose natural gas pipeline in San Bruno, California exploded several months ago, failed to spend $183 million on pipeline safety that it had been authorized to collect between 1987 and 1999. 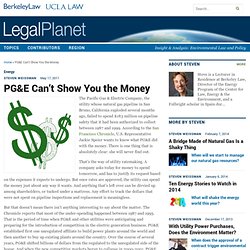 According to the San Francisco Chronicle, U.S. Regional Environmental Change , Volume 10, Number 3. The southern Yucatán Peninsular Region project was designed from the outset as an integrative, multidisciplinary program of study examining tropical deforestation in the largest track of seasonal tropical forest remaining in Mexico and in which smallholder agriculture and a major biosphere reserve are juxtaposed in regard to land uses and covers. 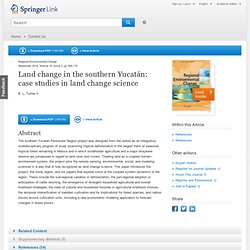 Treating land as a coupled human–environment system, the project joins the remote sensing, environmental, social, and modeling sciences in a way that is now recognized as land change science. Adolescente egipcia convierte plástico en biocombustible con un método barato. Forestry Insights. Culture Right through history forests have provided many of the products and benefits essential for the survival of man and the development of civilisation. 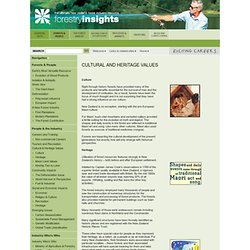 As a result, forests have been the focus of much thought and it is not surprising that they have had a strong influence on our culture. New Zealand is no exception, starting with the pre-European Maori culture. Portable Battery. Energy. We are a community farm only a stone's throw from the city of London. Energy. Jardin en carrés. Vélo pliant électrique - Vélo pliable électrique - VAE urbain léger - VAE ultralight - Vélo électrique pratique - V'Lec Pocket - V'Lec Cycles - Vlec - VAE français. Marchands de graines. NATURA. Developpement-local. Developpement-durable. ECOLO. Solar Powered Animal Sensors. Posted on December 4, 2009 by saya. 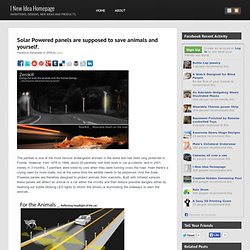 Water, The Great Mystery. “Water is the driving force of all nature.” – Leonardo da Vinci Water makes most of earths surface and most of our human bodies … but do we really know the secrets of this amazing element. 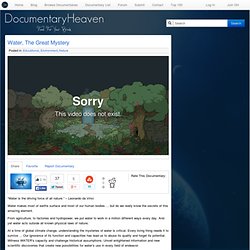 From agriculture, to factories and hydropower, we put water to work in a million different ways every day. And yet water acts outside all known physical laws of nature. At a time of global climate change, understanding the mysteries of water is critical. Every living thing needs it to survive … Our ignorance of its function and capacities has lead us to abuse its quality and forget its potential. Revealed: The stunning images which show how Europe wastes energy and pollutes light while Africa, South America and much of Asia is in darkness. By Craig Mackenzie Published: 12:15 GMT, 8 July 2012 | Updated: 06:51 GMT, 9 July 2012 At night, London is a burning bright spot, consuming enough energy to power Ireland with its light show. 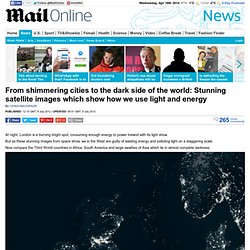 But as these stunning images from space show, we in the West are guilty of wasting energy and polluting light on a staggering scale. Now compare the Third World countries in Africa, South America and large swathes of Asia which lie in almost complete darkness. Moving Wind Turbines in a New Direction. Recently, CleanTechies had the pleasure to speak with Phillip Ridings, CEO of Dragonfly Industries, Inc. 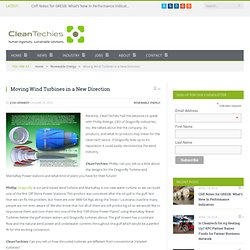 We talked about the the company, its products, and what its products may mean for the clean tech sector. If Dragonfly lives up to it’s reputation it could easily revolutionize the wind industry. CleanTechies: Phillip, can you tell us a little about the designs for the Dragonfly Turbine and MantaRay Power stations and what kind of plans you have for their future? Phillip: Dragonfly is our land based wind turbine and MantaRay is our new water turbine so we can build one of the first Off Shore Power Stations! This product was conceived after the oil spill in the gulf. Creating home power - Zero Point Energy Generator. A zero point energy generator is another re volutionary generator that uses batteries as well as magnets in running which has claimed that this type of generator could power a whole house yet it could burn it. 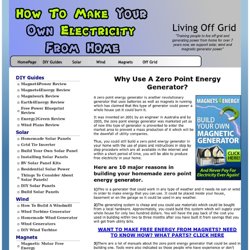 It was invented on 2001 by an engineer in Australia and by 2005, the zero point energy generator was marketed yet as of now this type of generator is prevented to enter the market area to prevent a mass production of it which will be the downfall of utility companies. Thus, you could still build a zero point energy generator in your home with the use of plans and instructions in step by step procedure which are all available in the internet and within a short period of time, you will be able to produce free electricity in your home. 1) This is a generator that could work in any type of weather and it needs no sun or wind in order to make energy that you can use. Sustainability Showcase. A Canopy of Man-Made Solar-Powered Supertrees Flourishes in Singapore - Design. A national park filled with electrified, man-made trees sounds like a paradox. 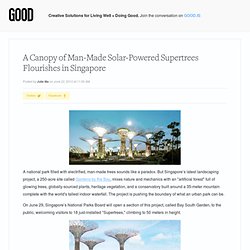 But Singapore’s latest landscaping project, a 250-acre site called Gardens by the Bay, mixes nature and mechanics with an "artificial forest" full of glowing trees, globally-sourced plants, heritage vegetation, and a conservatory built around a 35-meter mountain complete with the world's tallest indoor waterfall.

The project is pushing the boundary of what an urban park can be. On June 29, Singapore’s National Parks Board will open a section of this project, called Bay South Garden, to the public, welcoming visitors to 18 just-installed "Supertrees," climbing to 50 meters in height. "Many countries now do tree-planting and call themselves garden cities," CEO of Gardens by the Bay, Dr. Farming for a future. Snowflakes Up Close: A Small, Fragile World. If you’re one of those people who likes to ponder things while looking out a frosty window on a cold winter day, these pictures will clear up one of those long standing wonders: each snowflake really IS unique. 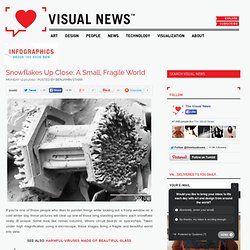 Some look like roman columns, others circuit boards or spaceships. Taken under high magnification using a microscope, these images bring a fragile and beautiful world into view. See Also HARMFUL VIRUSES MADE OF BEAUTIFUL GLASS. Water. Green. Image035.jpg (JPEG Image, 480×480 pixels) Aquaponics. Recyclebank. Get closer to nature by living in an underground home built from sustainable materials I’ve always wanted to live in an underground dwelling because it’s the closest I’ll ever get to living like a Hobbit, and it seems like the perfect place to go in case zombies attack.

At last, little chunks of aluminum everywhere can be something greater then a soda can or a baseball bat. Thanks to a special reactive alloy, some of those lucky little nuggets could solve the world's energy crisis. Jerry Woodall, an engineer at Purdue University, has created an aluminum alloy that reacts with water to create hydrogen and heat. He is encouraging venture capitalists to design a system that uses both capturing the hydrogen as fuel and using the heat to pull clean water out of the air. The greatest benefit of using aluminum is its abundance. "There is enough aluminum on the Earth's crust to supply the whole world's energy needs," Woodall told InnovationNewsDaily. 5 Easy to Grow Mosquito-Repelling Plants. As the outdoor season approaches, many homeowners and outdoor enthusiasts look for ways to control mosquitoes. With all the publicity about the West Nile virus, mosquito repelling products are gaining in popularity.

But many commercial insect repellents contain from 5% to 25% DEET. There are concerns about the potential toxic effects of DEET, especially when used by children. Children who absorb high amounts of DEET through insect repellents have developed seizures, slurred speech, hypotension and bradycardia. There are new DEET-free mosquito repellents on the market today which offer some relief to those venturing outdoors in mosquito season. Sprinter Micro Living. SUSTAINABLE PLANET. Ecologistas en Acción.