Culture, medicine and diet. Neanderthal genetics. Neanderthals were ancient mariners - life - 29 February 2012. IT LOOKS like Neanderthals may have beaten modern humans to the seas. 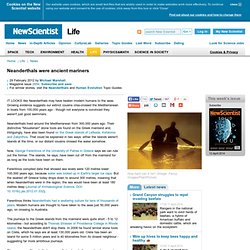 Growing evidence suggests our extinct cousins criss-crossed the Mediterranean in boats from 100,000 years ago - though not everyone is convinced they weren't just good swimmers. Neanderthals lived around the Mediterranean from 300,000 years ago. Their distinctive "Mousterian" stone tools are found on the Greek mainland and, intriguingly, have also been found on the Greek islands of Lefkada, Kefalonia and Zakynthos. That could be explained in two ways: either the islands weren't islands at the time, or our distant cousins crossed the water somehow. Now, George Ferentinos of the University of Patras in Greece says we can rule out the former.

Ferentinos compiled data that showed sea levels were 120 metres lower 100,000 years ago, because water was locked up in Earth's larger ice caps. Ferentinos thinks Neanderthals had a seafaring culture for tens of thousands of years. New Scientist Not just a website! Much Earlier Split for Neanderthals, Humans? In the ranks of prehistoric humans, Neanderthals were our closest relatives. 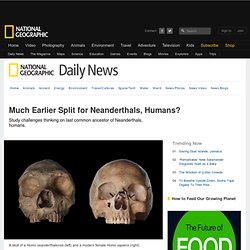 We were so close, in fact, that our species interbred with theirs. Tracing back our lineages, there must have been a last common ancestor of Homo sapiens and Neanderthals sometime in prehistory. (Related: "Geno 2.0 Can Reveal How Neanderthal You Are. ") But who was this mystery human? Picking out direct ancestors in the fossil record is tricky. Separation between Neanderthal and Homo sapiens might have occurred 500,000 years earlier, DNA from teeth suggests. The separation of Neanderthal and Homo sapiens might have occurred at least one million years ago, more than 500.000 years earlier than previously believed, according to new DNA-based analyses. 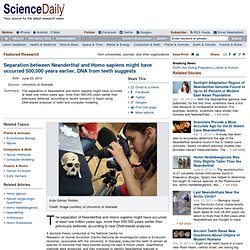 A doctoral thesis conducted at the National Center for Research on Human Evolution (Centro Nacional de Investigación sobre la Evolución Humana), associated with the University of Granada, analyzed the teeth of almost all species of hominids that have existed during the past 4 million years. Quantitative methods were employed, and they managed to identify Neanderthal features in ancient European populations. No known hominin is common ancestor of Neanderthals and modern humans, study suggests. The search for a common ancestor linking modern humans with the Neanderthals who lived in Europe thousands of years ago has been a compelling subject for research. 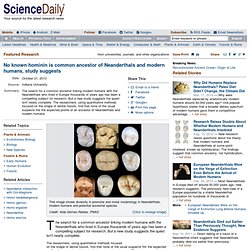 But a new study suggests the quest isn't nearly complete. The researchers, using quantitative methods focused on the shape of dental fossils, find that none of the usual suspects fits the expected profile of an ancestor of Neanderthals and modern humans. They also present evidence that the lines that led to Neanderthals and modern humans diverged nearly 1 million years ago, much earlier than studies based on molecular evidence have suggested. The study, which will be published online this week by the Proceedings of the National Academy of Sciences, was carried out by an international team of scholars from The George Washington University, Konrad Lorenz Institute for Evolution and Cognition Research in Austria, Indiana University and Atapuerca Research Team in Spain. P. What comes next? Scientists provide a more accurate age for the El Sidrón cave Neanderthals.

A study has been able to accurately determine the age of the Neanderthal remains found in the El Sidrón cave (Asturias, Spain) for which previous studies had provided inexact measurements. 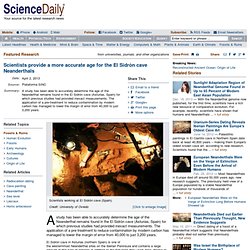 The application of a pre-treatment to reduce contamination by modern carbon has managed to lower the margin of error from 40,000 to just 3,200 years. Discovery Reveals That Neanderthals Were the First in Europe to Make Specialized Bone Tools. Neanderthals Fashioned Earliest Tool Made From Human Bone. The earliest known tool made from human bone has been discovered — and it was apparently crafted by Neanderthals, scientists find. 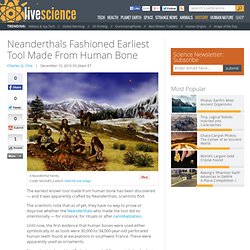 The scientists note that as of yet, they have no way to prove or disprove whether the Neanderthals who made the tool did so intentionally — for instance, for rituals or after cannibalization. Until now, the first evidence that human bones were used either symbolically or as tools were 30,000-to 34,000-year-old perforated human teeth found at excavations in southwest France.

These were apparently used as ornaments. Now scientists have identified a human skull fragment dating back at least 50,000 years that bears signs it was used as a sharpener. It was found in a Neanderthal deposit — the first time our relatives were discovered making tools from human bone. Mysterious New Human Coexisted with Neanderthals: Photos. Skulls with mix of Neandertal and primitive traits illuminate human evolution. Researchers studying a collection of skulls in a Spanish cave identified both Neandertal-derived features and features associated with more primitive humans in these bones. 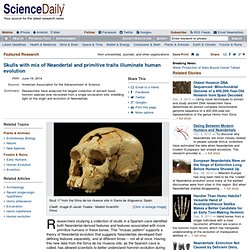 This "mosaic pattern" supports a theory of Neandertal evolution that suggests Neandertals developed their defining features separately, and at different times -- not all at once. Having this new data from the Sima de los Huesos site, as the Spanish cave is called, has allowed scientists to better understand hominin evolution during the Middle Pleistocene, a period in which the path of hominin evolution has been controversial. "The Middle Pleistocene was a long period of about half a million years during which hominin evolution didn't proceed through a slow process of change with just one kind of hominin quietly evolving towards the classic Neandertal," said lead author Juan-Luis Arsuaga, Professor of Paleontology at the Complutense University of Madrid.

Arsuaga and his team were delighted to work on this effort.