Do the Eyes Have It? Dog domestication may have helped humans thrive while Neandertals declined Pat Shipman We all know the adage that dogs are man’s best friend. 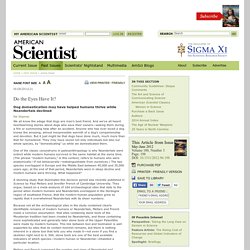 And we’ve all heard heartwarming stories about dogs who save their owners—waking them during a fire or summoning help after an accident. Anyone who has ever loved a dog knows the amazing, almost inexpressible warmth of a dog’s companionship and devotion. But it just might be that dogs have done much, much more than that for humankind. One of the classic conundrums in paleoanthropology is why Neandertals went extinct while modern humans survived in the same habitat at the same time. A stunning study that illuminates this decisive period was recently published in Science by Paul Mellars and Jennifer French of Cambridge University. New dates rewrite Neanderthal story. Modern humans and Neanderthals co-existed in Europe 10 times longer than previously thought, a study suggests. 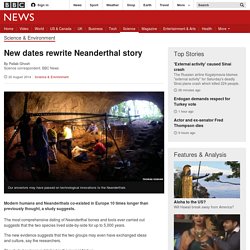 The most comprehensive dating of Neanderthal bones and tools ever carried out suggests that the two species lived side-by-side for up to 5,000 years. The new evidence suggests that the two groups may even have exchanged ideas and culture, say the researchers. The study has been published in the journal Nature. Until now, Neanderthal remains have been dated by a number of laboratories but many have been considered unreliable. Now an international team of researchers collected more than 400 samples from the most important sites in Europe. The results provide the clearest insight yet into the interaction between our ancestors and Neanderthals, when they first encountered each other and why the Neanderthals went extinct, according to the lead researcher, Prof Thomas Higham of the University of Oxford. Department of Human Evolutionary Biology.

While it may seem like kids grow up too fast, evolutionary anthropologists see things differently. 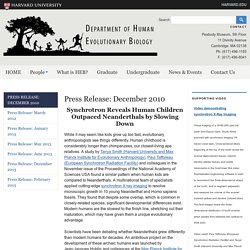 Human childhood is considerably longer than chimpanzees, our closest-living ape relatives. A study by Tanya Smith (Harvard University and Max Planck Institute for Evolutionary Anthropology), Paul Tafforeau (European Synchrotron Radiation Facility) and colleagues in the November issue of the Proceedings of the National Academy of Sciences USA found a similar pattern when human kids are compared to Neanderthals. A multinational team of specialists applied cutting-edge synchrotron X-ray imaging to resolve microscopic growth in 10 young Neanderthal and Homo sapiens fossils. Neanderthals and the Dead. Photo Early in the 20th century, two brothers discovered a nearly complete Neanderthal skeleton in a pit inside a cave at La Chapelle-aux-Saints, in southwestern France. 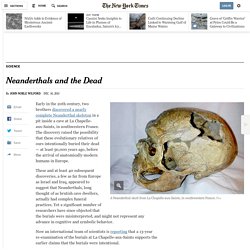 The discovery raised the possibility that these evolutionary relatives of ours intentionally buried their dead — at least 50,000 years ago, before the arrival of anatomically modern humans in Europe. These and at least 40 subsequent discoveries, a few as far from Europe as Israel and Iraq, appeared to suggest that Neanderthals, long thought of as brutish cave dwellers, actually had complex funeral practices. Yet a significant number of researchers have since objected that the burials were misinterpreted, and might not represent any advance in cognitive and symbolic behavior. Now an international team of scientists is reporting that a 13-year re-examination of the burials at La Chapelle-aux-Saints supports the earlier claims that the burials were intentional.

In light of these findings and other recent studies, Dr. Our Neandertal Brethren: Why They Were Not a Separate Species. According to the late Harvard University biologist Ernst W. 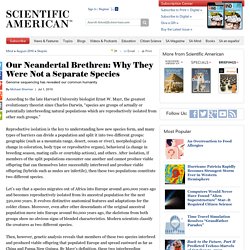 Mayr, the greatest evolutionary theorist since Charles Darwin, “species are groups of actually or potentially interbreeding natural populations which are reproductively isolated from other such groups.” Our Neandertal Brethren: Why They Were Not a Separate Species. The origin of Neandertals. J. 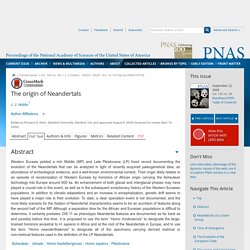 J. Hublin1 Author Affiliations Edited by Richard G. Smithsonian Science News –Why did Neanderthals go extinct? By John Gibbons Smithsonian paleoanthropologist Briana Pobiner gives us a closer look into what may have caused Neanderthals to disappear. 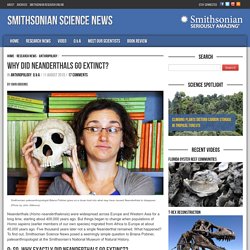 (Photo by John Gibbons) Neanderthals (Homo neanderthalensis) were widespread across Europe and Western Asia for a long time, starting about 400,000 years ago. But things began to change when populations of Homo sapiens (earlier members of our own species) migrated from Africa to Europe at about 45,000 years ago. Five thousand years later not a single Neanderthal remained.

Q: So, why exactly did Neanderthals go extinct? Neanderthals. In 1856, laborers working in a limestone quarry near Düsseldorf, Germany, unearthed bones that scientists initially thought belonged to a deformed human. 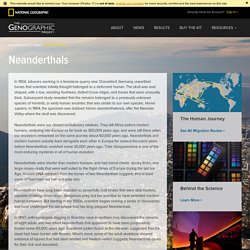 The skull was oval shaped, with a low, receding forehead, distinct brow ridges, and bones that were unusually thick. Subsequent study revealed that the remains belonged to a previously unknown species of hominid, or early human ancestor, that was similar to our own species, Homo sapiens. In 1864, the specimen was dubbed Homo neanderthalensis, after the Neander Valley where the skull was discovered. 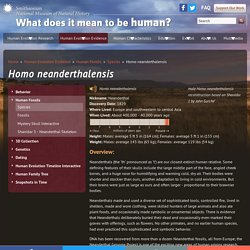 Some defining features of their skulls include the large middle part of the face, angled cheek bones, and a huge nose for humidifying and warming cold, dry air. Their bodies were shorter and stockier than ours, another adaptation to living in cold environments. But their brains were just as large as ours and often larger - proportional to their brawnier bodies.